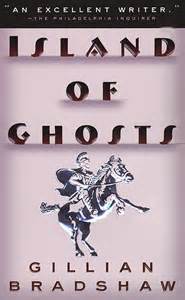 Ariantes is a Sarmatian, a barbarian warrior-prince, uprooted from his home and customs and thrust into the honorless lands of the Romans. The victims of a wartime pact struck with the emperor Marcus Aurelius to ensure the future of Sarmatia, Ariantes and his troop of accomplished horsemen are sent to Hadrian’s Wall. Unsurprisingly, the Sarmatians hate Britain–an Island of Ghosts, filled with pale faces, stone walls, and an uneasy past.

Struggling to command his own people to defend a land they despise, Ariantes is accepted by all, but trusted by none. The Romans fear his barbarian background, and his own men fear his gradual Roman assimilation. When Ariantes uncovers a conspiracy sure to damage both his Roman benefactors and his beloved countrymen, as well as put him and the woman he loves in grave danger, he must make a difficult decision–one that will change his own life forever.

Some months ago, your name was mentioned, in glowing terms, on a thread at DA and the descriptions of some of your recommended books caught my attention. Since to me hearing the words “Roman Britain” are like the bell to Pavlov’s dogs, I knew eventually I’d try this book. The first chapter excerpt read wonderfully with vivid characters and a fascinating set-up which hooked me there and then. I couldn’t wait to get started.

Ariantes shepherds all his men, along with those of the other two commanders who aren’t as willing to make the overtures and smoozing needed to smooth the process, across the channel to this island none of them were even sure existed since they couldn’t see it. Things only get worse as the journey continues with both sides rubbing the other the wrong way, honor at stake and the full impact of their exile finally hitting home to these proud men. And that’s before the paperwork kicks in.

The first third of the story is a lot of bureaucracy and paperwork. Roman style. Ariantes is a reluctant diplomat as well as military leader. But he is a leader and one who takes the lives and welfare of his men very seriously. He’s a thinking man though he can wield a sword and dagger as well as anyone. He’s a man lost in a new world, trying to not only find his way with honor but lead his men in finding their footing in their new lives as none of them can ever go back and have already been mourned by their people as dead.

New alliances must be forged among people they don’t know, using customs new to them in a land they were convinced was made up. These are proud men used to commanding absolute obedience, working individually and taking nothing from anyone so their changed reality takes some getting used to.

To be honest, it does take this book a little while to gather itself together and gain a lot of momentum, though the ground work laid in the early section comes into play later on. Just be patient, let it slowly sink in and get its footing. The visual of the Sarmatian units, or dragons as they’re known, outfitted in their ringed armor with silk pennants snapping in the wind must have been something to see.

This is definitely more a historical fiction with romance than a true romance. The relationship, once it arrives, is heartfelt and true though rather fast in a coup de foudre way. But the Lady in question is more than a match for Ariantes and tells him a thing or two when she feels it’s needed. I like that though Ariantes isn’t expecting to find a second love in his life, the loss of his first wife doesn’t send him into the throes of “I’ll never love again!” He quickly realizes that Pervica is a treasure with a will of iron and a level head and he’s damn lucky she says yes when he proposes.

The conspiracy is both intricate and believable and draws in the various factions of the age and time as well as tossing in a few Christians and Druids. The tension grows as Ariantes must solve who is behind the plotting while at the same time keeping the Romans at bay since he can’t make accusations without proof but the conspirators are more than willing to keep trying to kill him until he does. With mutual black humor, he and Pervica set the date for their wedding “providing Ariantes is still alive then.”

The humor is something I hadn’t anticipated yet which I enjoyed immensely. Ariantes’ world weariness as he tries to navigate the Sarmatians through this “Island of Ghosts” ruled by Romans who mistrust them speaks to anyone who’s dealt with middle management anywhere. By the time he’s safely through, with his head and honor intact and the woman he loves by his side, the poor man has more than earned his (hopefully) happy future. B