I’ve read and enjoyed Blaze books written by you and I’ve purchased your full length books   in the past but it wasn’t until I got a prod from SB Sarah that I actually read one of your full length novels. I’m so glad I did. 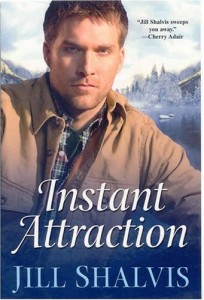 Katie Kramer survives a near fatal tragedy and determines that she must live big else her survival would have been wasted. This newfound enthusiasm for adventure leads her to take a job with Wilder Adventures. Wilder Adventures is an extreme winter resort in the Sierra Madre mountains run by the Wilder brothers. It is also the home of Cam Wilder, a champion snowboarder, whose long and glorious career ended during a race the previous year.

Cam was world weary and heart sore and all the traveling around the globe didn’t help him find the answer to how to live with the loss of his skill, his fame, and his relationship with his long time girlfriend, Serena. He was a thrill seeker to the nth degree with no mountain to great a challenge for his board and body.   His zest for life seemed to be crushed with the career ending injury to his knee.

Cam returns home after a year of wandering the world to find Katie in his bed. Too tired to deal with the confusion, Cam collapses on a chair next to the bed and proceeds to fall asleep despite Katie’s questioning whether he is an ax-murderer.   The two have an immediate attraction which Katie embraces and Cam runs from.   Katie sees Cam as part of her big adventure and Cam senses that Katie poses a big risk for him.   Neither are ready for any long term relationship.   To presume that Katie is the more courageous only skims the surface of the story because Cam and Katie are a study in how we hide our weaknesses by pretending they are our strengths.

Katie lived her life with precision and carefulness until that one fateful day. She then endeavored to essentially live with Cam’s outlook on life (not knowing Cam, of course). She wanted to become that thrill seeker.     Cam lives pursuing challenges, each one greater than the last, but only in the physical sense. He’s not a good risk himself because when it comes to people, the first hint of difficulty sees Cam leaving.   Katie, while living with her heart on the outside of her body, uses her openness as shield to hide from people, from hurt, and from fear and guilt of living.

So in some sense, Katie and Cam’s search for adventure is all about masking the real hollowness inside. Katie has to stop hiding from the real effects of her trauma and Cam has to stop running and address the challenge of living inside his own skin.

I admit that I initially had a problem with snowboarder Cam because he simply was a snowboarder. He just didn’t fit my idea of a hero because snowboarding seems so . . . youthful, but you really won me over.   And as much as I liked Cam whose vulnerability ran just beneath surface, it is Katie who carries this book.    There is a real sense of joy in her character, despite her loss.   While neither Cam nor Kate are full of much real courage in the beginning, they both grow by asborbing the others’ strengths.   Katie becomes less fearful and Cam becomes more open and together the  discover that their connection to each other makes them stronger inside where all the external thrills could not begin to compensate.

My complaints are fairly weak.   There is a certain homogenity to the narration of the Wilder brothers.   I didn’t feel that they had distinct personalities.   Sometimes the sibling interaction seemed cliched, as if there was an obvious effort to make all of the Wilder boys irresistible to seed the future books in the series.

There is a delightful secondary romance as the Wilder aunt, Annie, and her longtime husband, salveage the marriage that has gone stale. There was a lot of nuance in this story that came as an unexpected surprise.   I mentioned to Sarah that this was Cruise-like in its tone with the smart dialog, the engaging characters, and the slightly ensemble cast.   Can’t wait for more Wilder stories.   B

This book can be purchased in trade paperback from Amazon or ebook format from the Sony Store and other etailers on January 27, 2009. We’ll be giving away copies of the book later today so stay tuned.

→ Jane
Previous article: Portrait of a Noob eReader
Next Post: Save the Contemporary, Part 3: Instant Attraction by Jill Shalvis