I couldn’t resist the miniseries title “Girls Weekend in Vegas.” It conjures up all kinds of fun images as well as makes me wonder what went on and did it stay in Vegas? You actually spent very little time on the actual weekend in question and more on what happens next. And what started in Vegas definitely doesn’t stay there or at least it takes a San Diego detour before heading back. 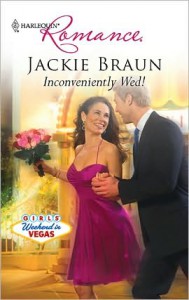 Serena Warren is only in Vegas to help her jilted friend Jayne over her heartbreak. When she and fellow helper Molly Hunter go out, Serena never expects to feel the instant connection she does with the hottie who also wants to claim a table at the Bellagio. Especially since she’s something of a free spirit while Mr. Hottie looks more the button down type. But they decide to spend the rest of the evening together and before it’s over, the rest of their lives.

The next morning all Serena can think is, “what was I thinking?” Jonas Benjamin sends sparks shooting through her nervous system but delightful chills up and down her spine but the note Serene leaves before bolting for home offers him an easy way out of their Vegas wedding chapel nuptials – which were thoroughly and amazingly consummated. So she’s surprised when the man himself arrives in San Diego with a proposition.

Jonas only wants to follow in his politician father’s footsteps so far and his limit is mayor of Las Vegas. He’s in a dead heat with an older, experienced candidate and getting a quickie annulment to go with his quickie marriage isn’t going to win him any votes. If Serena will be a pretend wife and help with his campaign, he’ll help her get started in the cake decorating business she wants to start. And while at first their platonic arrangement seems to be working, will they be able to deny what they truly feel for long?

I like that the book doesn’t waste time on lots of subplots but since it’s a concurrent series, I imagine most of those are taken care of in the separate books. The other three heroines are present at various times but mainly to take part in this story and not to blatantly curry interest in their books.

Serena doesn’t have the best family life but she doesn’t throw pity parties about it nor does she mope that her parent’s bad marriage has *ruined her for life* as far as finding her own true love. From what her friends say, she might be subconsciously avoiding commitment but she doesn’t throw up barriers before even giving a guy a chance. But I was very pleasantly surprised by most of Jonas’s family – well his mother and sister – and how warm and welcoming they are to this woman who is the exact opposite of what they must have been expecting. Brava.

I also like the fact that for the most part, Serena decides to just be herself. No, she’s not the perfect candidate’s wife and she doesn’t stick to boring taupe and granny pearls but she’s honest, sincere, listens well and does try to keep up her end of their campaign bargain. Meanwhile, Jonas does what he promised by getting Serena’s name out in the confectionary world as he backs her up against anything negative said by his manager or father. Oh, and thank you for not giving the Other Woman a larger platform in the story. She serves her purpose and then is gone.

The Big Mis at the end is also handled nicely. It makes sense, could easily happen and be misconstrued just as it is. But I like that Jonas insists on knowing what has gone wrong, doesn’t try and lie about what upset Serena and seizes the opportunity to set things right in a way Serena can’t possibly ignore. Their public reconciliation will probably be the talk of Vegas for years.

I’m having luck with the Harlequin Romance line. The heroines aren’t doormates and the heroes aren’t bastards – as plainly seen in “Inconveniently Wed!” Jonas is a sweetie and I think the wilder Serena will be good for him and his tie wardrobe. B