REVIEW: In Her Defense by Julianna Keyes 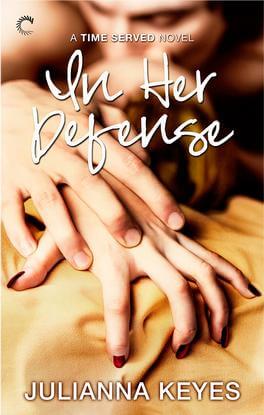 I have a bad feeling about how this book will sell and what kind of reception it will get.  The heroine is ambitious with capital A.  She has had several sexual partners, including a married man (he was separated). Her view on sex is not sacred. It’s something she enjoys, but it doesn’t involve her heart. The only thing that Caitlin Dufresne respects and desires is success.

It’s lonely at the top is something her dad told her once, but she enjoys it. She works harder than anyone else around her and, for the most part, she’s smarter. She’s also incredibly selfish. But I really, really enjoyed Caitlin and would love to read more stories about a woman like her.

Yet…in romancelandia, female characters are judged so harshly and I fear for what others might think of Caitlin.

Caitlin is spending her last days at the Chicago offices of her elite law firm. In a month or so she’ll be sent to Los Angeles to spearhead the opening of an LA branch. Before she leaves, however, she makes a critical error due to her lack of sleep and she is forced to go on a vacation. Further, her partners force her to work regular hours. They’ve instructed IT to lock down her access to the firm servers before __ and after __. Even her elevator card won’t work if she doesn’t get out of her office.

Predictably the forced vacation makes Caitlin examine her life. She really has none outside of her work. During her vacation, she works with another lawyer, helping him with a fairly big case. She spends time going to her niece’s really terrible softball games. And she fools around with IT guru, Eli Grant (who does not succumb to Caitlin’s charms in the way you would expect).

She learns that in her pursuit of the top spot, she’s losing her humanity. In the beginning of the book she treats people who she doesn’t respect with dismissiveness. Over the course of the book she changes her perspective on people so that she begins to see that others have value in ways she didn’t see in the beginning because her measuring stick was focused on one single feature–success.

I also liked that while she changed, she still enjoyed achievement and she didn’t give up her ambition. She merely learned to a better balance between work (which was fulfilling) and other things (like her niece, going to the beach, and yes, Eli). She began to see the benefits of not being selfish.

This is Caitlin’s story and so while Eli has his own baggage not much time is spent in the exploration of said baggage. And he does something pretty shitty at the end of the book that I felt required a far bigger grovel than he laid down. I wondered if Eli’s failure to make the big verbal gesture was supposed to be because Caitlin was horrible and thus didn’t deserve it.

While I know for some readers that Caitlin is going to be hard to swallow but I liked her and if the reader is invested in Caitlin for more than fifty percent of the book, they are going to be rooting for her happiness. Thus, Eli needed to be more loving than he came off at the end of the book. B