REVIEW: In For a Penny by Rose Lerner 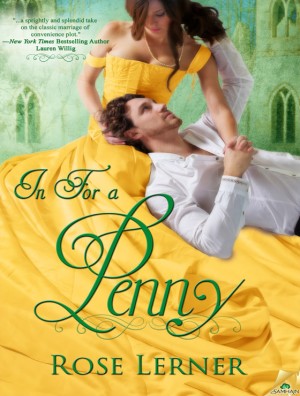 I’ve been having a hard time finding historical romances to read, and Janine suggested that I take a look at your older romances. I actually read A Lily Among Thorns a while ago and it didn’t leave much of an impression, but In For a Penny turned out to be much more enjoyable.

Nathaniel Ambrey, Viscount Nevinstoke, is heir to an earldom but has little to occupy him, so he spends his time running around town and having fun with his friends. He meets Penelope Brown at a ball and is drawn to her appearance and interest in music, but does not give it much further thought.

Soon after, however, Nev’s father is killed in a duel. The late Earl of Bedlow was, as Nev notes to Penelope earlier, good at spending money but not at making it. This leaves his family in crushing debts, and although Nev sells everything he can, it’s not enough. When his younger sister Louisa suggests that she might help the family’s financial situation by marrying a merchant, Nev thinks of a better idea: he’ll propose to Penelope, who has a fortune settled on her by her father.

In another book, Nev might have set out to court and seduce Penelope without telling her the reasons until later. Fortunately, In For a Penny is not such a book. Nev tells Penelope exactly what his situation is, but also tells her that he would not have proposed if he did not like her and thought that they could get along well together. Much to her shock and that of her parents, Penelope accepts, and the two are soon married.

Penelope and Nev then set off for his estate, Loweston, where it turns out that things have gone very badly for the tenants in recent years. The two of them are essentially strangers at this point, and they try to find a way to build a life together while also dealing with the many problems and challenges facing them at Loweston. Their neighbor Sir Jasper is convinced that the workers are criminals about to revolt and treats them accordingly, and the local vicar is not helping matters, either. Nev has cut himself off from his friends after his father’s death, convinced that he has to be responsible and avoid any of the temptations that eventually lead to his father’s ruin, and he and Penelope are essentially on their own in a situation that neither has been trained to deal with.

Penelope and Nev are wonderful characters. They’re young, even for a historical, and it shows: nineteen year old Penelope is not long removed from finishing school, where she struggled to fit in. Her parents started out poor, and while they are now wealthy, their money was made from a brewery and they lack social graces and connections. As a result, Penelope has always been made to feel like an outsider who could never be a lady. She doesn’t know how to deal with the angry tenants, and is insecure in her relationship with Nev. While the two get on well, she knows that he would have never chosen her where it not for her wealth. Penelope has a good head for numbers and experience in bookkeeping from her father’s business, but she doesn’t feel like there is much more that she can contribute.

Nev is twenty three, and until his father’s death, he had no responsibilities at all. He has no idea how to fix the situation his father left and being in a position of authority is new to him. He admits to Penelope early on that he is not particularly clever when it comes to business, and is happy to rely on her in this area. While he very much likes Penelope, he feels like he doesn’t have enough to offer her and believes that she deserved a better husband and life.

Although Penelope and Nev don’t believe that they are good enough for the other, it’s easy for the reader to see that they are wrong, and to root for them to get to know each other better and realize this too. Both are very caring and trying to live up to their new adult responsibilities. They share an interest in music and enjoy each other’s company, and they are just a good match in many ways.

I really enjoyed your writing and the dialogue, which reminded of older regency historicals at time rather than the modernized ones that we often see these days. You write about the period in a way that felt fresh and interesting, which is something that I appreciated. I also liked the secondary characters, especially Penelope’s parents. Often when a heroine comes from Penelope’s background, she is embarrassed about her origins and her parents are depicted as being interested mainly in her marrying a title. But Penelope loves her parents, and they are warm and very kind people, both to their daughter and to others. The last thing they want is for Penelope to marry a fortune hunter. They do come to like Nev for the person he is, and are supportive of their daughter and son in law.

In For a Penny was in A-grade territory for me for much of the story, but I did become frustrated with Penelope and Nev’s difficulty in communicating their feelings. At first this really worked for me, because the two barely knew each other when they married and I liked that it took time for them to build a relationship and trust each other. But eventually I just wished that they would stop feeling so inadequate and believe the worst about how the other person felt about them and the relationship. Both Nev’s former mistress and Penelope’s former suitor both eventually arrive at Loweston, though for different reasons, and Penelope and Nev can’t help but wonder if the other wouldn’t have been happier if they had been free to pursue those relationships.

It’s not unrealistic for two people who are young, inexperienced, and who married after a very short acquaintance to take time to learn to trust and communicate. My problem was not so much with the pacing but more because I felt the conflict was resolved artificially, as the story descended into melodrama in the latter part. It felt over the top and unnecessary, and I wish that Penelope and Nev had been given the opportunity to work out their differences and express their true feelings without it. Instead, the resolution struck me as rushed and too tidy. This wasn’t enough to spoil the book for me, but I was expecting something different and this seemed too conventional for the book and the characters. As a result, In For a Penny gets a B from me.