REVIEW: In a Handful of Dust by Mindy McGinnis 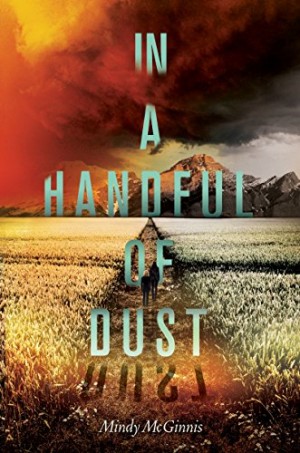 Despite my weariness with the dystopian and post-apocalyptic genre, I liked your previous novel, Not a Drop to Drink. Even more refreshing was the fact that it appeared to be a standalone. It turns out I was wrong — In a Handful of Dust is the companion novel but I think both novels stand alone well on their own.

While Not a Drop to Drink focused on tough-as-nails Lynn, In a Handful of Dust tells the story of her sweeter, more hopeful charge, Lucy. Things have gone as well as can be expected considering the post-apocalyptic premise, and a little town has formed. The world will never return to what it once was, but things are good.

Alas, nothing lasts forever. A disease sweeps through their little civilization, striking down both young and old. The likely carrier for the disease is Lucy’s would-be suitor, Carter. Unfortunately, this means he has to leave or face the survivors’ wrath. Even more unfortunately, so does Lucy — she’s been in Carter’s company, so even though it’s unlikely that she’s the carrier, the chance is not 0%. And where Lucy goes, so does Lynn.

Together, the two women strike out west, to what once was California. There are rumors of desalination plants there. In a world where water is the most precious commodity, this seems miraculous. But the journey is rife with danger, and soon Lucy will have to face the truth — can she survive in a world without Lynn to protect her?

Like its predecessor, I enjoyed In a Handful of Dust because it takes the path of post-apocalyptic survival combined with a frontier sensibility. There are no nonsensical dystopian governments to overthrow. There is no angsty star-crossed romance, although it may seem like it at first glance. This is the coming-of-age story of a young woman in a world that will never return to what it once was.

Where the book falters for me is that I find Lynn to be a more interesting character than Lucy. I’m just fond of tough-as-nails women who get things done.

“I been trying to do better about killing people,” Lynn said. “Then fate puts you in my path.”

That said, I liked the fact that the narrative doesn’t elevate Lucy over Lynn or vice versa. Both women are seen as valid and worthwhile. Lucy regrets that she’ll never be as strong as Lynn, but Lynn tells her that she should never feel that way. Lynn is the way she is because she had to be. (Not a Drop to Drink details this.) Lucy represents a gentler (as can be expected) life, so she’s allowed to hope and dream for a better life.

Lucy and Lynn’s journey is an interesting one. It’s full of betrayal and risking to trust others when they should know better. Most of the time this doesn’t work out, but sometimes it does. I also like that as the journey continues, Lynn’s infallibility comes to an end and soon Lucy has to do a little growing up herself.

I know most readers are probably tired of post-apocalyptic books these days but if anyone is still up for it, I do recommend they give these books a try. They’re more about the female characters’ journey and the frontier adventure sensibility lends a surprising freshness. I do wish there’d been more survival adventure novels like this when the subgenre had been at its peak, but that’s the way things fall sometimes. B