REVIEW: I’ll Be Seeing You by Suzanne Hayes and Loretta Nyhan

“I hope this letter gets to you quickly. We are always waiting, aren’t we? Perhaps the greatest gift this war has given us is the anticipation…”

It’s January 1943 when Rita Vincenzo receives her first letter from Glory Whitehall. Glory is an effervescent young mother, impulsive and free as a bird. Rita is a sensible professor’s wife with a love of gardening and a generous, old soul. Glory comes from New England society; Rita lives in Iowa, trying to make ends meet. They have nothing in common except one powerful bond: the men they love are fighting in a war a world away from home.
Brought together by an unlikely twist of fate, Glory and Rita begin a remarkable correspondence. The friendship forged by their letters allows them to survive the loneliness and uncertainty of waiting on the home front, and gives them the courage to face the battles raging in their very own backyards. Connected across the country by the lifeline of the written word, each woman finds her life profoundly altered by the other’s unwavering support.

This book interested me for a number of reasons. I try and seek out books set during World War II because it’s such a pivotal point in history but few of them show the home front – regardless of which national one that might be. I also enjoy epistolary novels and in addition have recently been watching the phenomenal “The World at War” series. But there’s an even more important reason this book called to me. 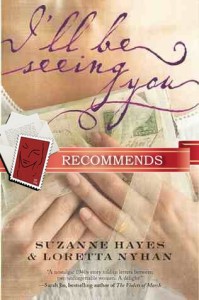 I love the feeling of friendship that pervades the story as it mirrors something similar in my own life. I’ve been best friends with a circle of women for over 13 years now. We group email each other every day, all day long. I know things about these women that even their families don’t know. We’ve been there for each other through thick and thin, good times and bad, happy and frightening. When something happens to one of us, the others are usually the first to be told. So I can easily identity with Glory and Rita and the way they get to know and care so deeply about each other without having ever met.

The War is the most important thing in the country and the all out effort that most Americans put into supporting it and Our Boys is obvious. It might seem overly Rah-Rah now to our cynical selves who have Watergate in our backgrounds on top of other things which cause us to question everything the gov’ment tells us, but in that day and age, this wasn’t the case. These people truly felt every thing they were asked to do was helping the war effort and it was their patriotic duty to do it. Telegrams would initiate hysteria, people were suspicious of “spies,” everyone did the best with what they had – whatever that might entail, use it up, wear it out, make it do or do without.

Rita and Glory don’t exist in a vacuum and the secondary characters flesh out the world in which they live – Glory and Rita’s husbands and son serving overseas, Charlie and Levi who for various reasons didn’t get drafted, Roylene the almost illiterate, downtrodden woman, and Mrs. Kleinschmidt – the suspected German immigrant proving her American bona fides. Together they all give a vivid picture of the people who serve and those waiting for them at home. These are the people volunteering at the USO, tending their Victory gardens, dealing with wartime rationing – some of those recipes actually do sound intriguing, writing letters to GIs, monitoring the blackout curtains – even in Iowa, and worrying that pneumonia could kill children in this era before widely available penicillin.

To be honest the tone of letters did become a tad preachy at times, the advice sought and given almost too pat and perfect in timing. Rita and Glory hardly ever get truly upset with each other in spite of some things each does that annoy and distress the other. They seem almost too willing to forgive and forget after offering a heaping helping of unconditional acceptance. Perhaps this is more in keeping with the mores of the day but some things deserved more “Snap Out of It!” than “Oh, hon, I totally understand.”

One thing I really enjoyed was seeing hints of some of the changes on the horizon for the post war era. Glory wonders how women will go back to kitchen after all the experiences they’ve had in the factories and serving in the military. The Life magazine cover – taken by Elizabeth Bourke White – of the concentration camps signals part of the end of the innocence of the age. That horror and knowledge of the evil men can do will forever cloud their lives now. The men returning home will discover that many of the women they left behind are not who they once knew while the women will learn how the war has altered those who saw its horrors first hand. “I’ll Be Seeing You” offers a little seen glimpse into a time that radically changed a nation and set the stage for the world we know now. It shows women being strong, and weak and human. But most of all being friends. B

→ Jayne
Previous article: REVIEW: Any Duchess Will Do by Tessa Dare
Next Post: REVIEW: More Than Friends by Jess Dee