REVIEW: If the Red Slipper Fits by Shirley Jump

I was looking for something fun and quick and found it here. Maybe parts of it are more Romance Land than believable in real life but the ride was so much fun that in the end, I didn’t care.

Sarah G has put her life on hold until now. Something about the sexy red stiletto heeled shoes that she brought home from her job on a fashion gossip rag called to her. But when she and her sister got into a spat, sister Diane tossed one of them out the window of Sarah’s NYC apartment. Where it was found by…. 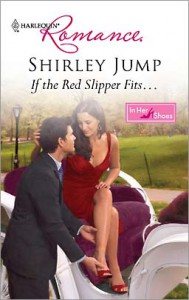 Caleb Lewis, son of legendary fashion designer Lenora Lewis, who’s been struggling at the helm of his mother’s business since her stroke over a year ago. His late night partying might keep his anxiety about his mother’s health and the health of the company at bay but it’s been noticed and commented on by several reporters including…

Sarah, who Caleb has sought out to confront about the unflattering articles. When he realizes the shoe belongs to Sarah and she desperate to get it back, he strikes a bargain with her. Write an in-depth and truthful story about LL Designs to counteract the tripe she’s been writing about him and she gets the shoe back before her boss finds out it’s missing. But will their blossoming feelings withstand the harsh lights once someone spills the news Caleb’s trying to conceal?

Early on, when Sarah was being described as the motherly sister who’d silently taken on all the family problems without complaint, I sighed “oh no. Not a martyr.” And behold, the next page has Sarah insisting that her pampered sister start to take on responsibility. Then Sarah is put behind the 8 ball by Caleb but she doesn’t cave in to him. She gives as good as she gets, zings him and acts like a woman with professional confidence. And it was good.

And Caleb isn’t the party hardy playboy of Sarah’s articles. He’s a hardworking businessman who is genuinely afloat in this business he had to suddenly take over. But he cares and works damn hard to keep it going and not see his mother’s life’s work sold down the river or the people who count on their jobs out of work. Sarah’s impressed with how ‘hands on’ he is – talking to designers, talking to shop owners, talking to those who’ll tell him the truth and she admits as much to him. And it was better.

These two communicate and negotiate and actually keep their promises to each other. Well, Caleb has to discover on his own that Sarah didn’t do what he thought she might have but he does this before he admits to her and to himself that he loves her. I love the way this is out of the way by the time Caleb and Sarah say their “I love yous.”

I did think that Caleb sitting Sarah down with a sketchpad to design a shoe for him then totally yanking the next collection days before fashion week is stretching things like Play-Doh. And even though I was glad to see Sarah’s sister and father suddenly stop hanging around her next and owning up to depending too much on her, it might have come too conveniently and quickly after ten years of this behavior. But I chalked it up to page counts and said “I’m enjoying myself otherwise so okay.”

But all in all, I had a great time reading “If the Red Slipper Fits.” Once again the “Romance” line comes through for me and I do plan on looking up anything else you’ve written for Harlequin. B