Review: I Love the Earl by Caroline Linden

I purchased I Love the Earl simply due to the charming cover and inexpensive price. I was in the mood for a historical and this fit the bill. You are new to me, and I was impressed by your wit and the lovely, uncomplicated story.  At approximately 150 pages, this was a perfect, brief afternoon read. 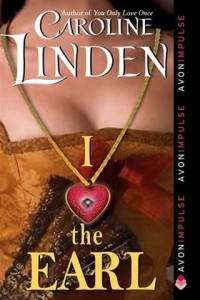 Miss Margaret de Lacey is a 30 year old spinster who has recently been elevated to heiress. Her brother inherited the estate of a duke, and a fortune of a dowry is bestowed on Margaret. She likes being a spinster and is in no rush to marry, but she also enjoys the new pleasures of being rich and titled – dresses, money, suitors, etc. After a while, the suitors grow tiresome as they are clearly fortune hunters, and when a Welsh earl, Rhys Corwen, the Earl of Dowling, approaches her, she sets him down flat. Rhys is in London looking for a wealthy bride. He’s seen a few reasonably attractive girls, but when he meets Margaret, he decides he must have her because she is so clever and unwilling to be impressed by his good looks.

Though your writing style is a little on the dry side, I was impressed at how clever the dialogue in this story was. I didn’t think it was a funny scenario, but the characters are so witty that I found myself marking place after place in the novella. Like this brief interlude between Margaret and her brother:

“Cheer up, Meg,” Francis told her over dinner the first night she was under his roof. “I’m glad you’re unmarried. Now I shan’t have to hire a new housekeeper.”

“I will poison your food if you ever say that to me again,” Margaret replied.

And when Miss Cuthbert (the chaperone) gets sick:

The boat hit a swell and the prow rose unexpectedly before dropping with a tremendous splash. Margaret caught her breath with excitement at the sudden feeling of lightness inside her, Miss Cuthbert went white and folded herself over the rail, and behind them both Francis laughed. “An apt preparation for the day’s events, Miss Cuthbert,” he shouted. “I feel quite the same way!”

And when Rhys and his friend observe Margaret’s dislike at a party:

Her defiant expression faded into annoyance, and then she gave him her back once more, slipping further into the crowd of guests. He chuckled.

“I see you’ve won her heart already.” Clyve grinned, watching the exchange. “When shall the wedding be?”

I really enjoyed the banter in this story. Where it fell down for me was emotionally – while I liked Margaret and Rhys, I didn’t feel compelled to feel anything about them. They were just nice people, in a nice story. And while this was perfectly fine for a 150 page story, if it had gone on for much longer, it would have felt too stretched out. I thoroughly enjoyed when Rhys and Margaret were sparring — she was determined to have nothing to do with him, and he was determined to marry her. The story shone in those pages. As Rhys began to declare love, I felt the transition was awkward; that perhaps he moved too quickly to love.

I did enjoy the ending, and thought it wrapped up nicely. Clever story, great price. I’m eyeing your backlist with interest. Solid B.

PS – I keep wanting to call this “I Heart the Earl” due to the cover.