REVIEW: I Am Zlatan: My Story On and Off the Field by Zlatan Ibrahimovic 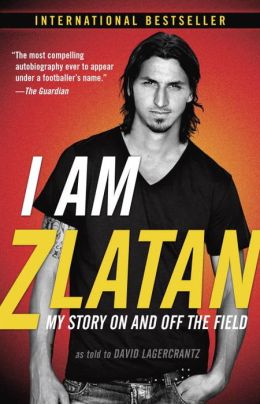 I read an excerpt of this book on Deadspin and thought, what the heck. I’m bored with romance these days and entranced by the World Cup. I know very little about fútbol and spend most of the World Cup games asking the television what is going on and why no one ever tells me how much time is left in the match.

But I can’t stop watching despite the non stop irritation I have without knowing how much time is left in the game and I’ve gained some understanding such as what offsides means. I won’t say that this book lent me insight into the game so much as it gives an individual a peak inside the mind of a driven athlete at the top of his game. Some reviewers have said this is an immigrant’s tale although Zlatan was born in Sweden.

The memoir chronicles Zlatan’s rise from Swedish poverty to international soccer superstardom. He doesn’t hesitate to identify those he thinks were incompetent such as his Barcelona coach, Pep Guardiola (then he got started on his philosophizing. I was barely listening. Why should I? That was advanced bullshit, about blood, sweat, and tears), and those he loved like the Inter Milan and REAL Madrid coach, José Mourinho, who he declared in the book he would die for and whose approval he sought in every game (“He built us up before matches. It was like theater, a psychological game. He might show videos where we’d played badly and say, “Look at this. So miserable! Hopeless! Those guys can’t even be you. They must be your brothers, your inferior selves,” and we nodded, we agreed. We were ashamed.”)

If Mourinho lights up a room, Guardiola draws the curtains.

After I read the book, I googled and read a few interviews with Zlatan. It seems clear to me he enjoys playing up the uber arrogant fútbol player persona but his actions are a mix of arrogance and boyish need for affirmation. On the one hand he wants you to know he’s arrived and on the other he’s constantly trying to prove himself. Other top tier athletes are notorious for stoking petty grievances into serious offenses for the sole purpose of keeping them hungry and motivated. Zlatan is no different. He stokes his anger, his feeling of inferiority, and his desire to be recognized into an on field rage that propels him down the field scoring goals like the one below.

I was the soccer star, but also the frightened kid in the tunnel again, the one who thought he’d make it if he just ran fast enough.

He’ll use anything, even the smallest slight–real or imagined–to win again. If you aren’t the type of person he admired, he didn’t think much of you and he definitely had a type he admired. He admires those who win at all costs. He admires strength but at the same time seems to be constantly testing those boundaries as if to say are you strong enough to stand with me? He admires skill, obviously, but he also is respectful of those he believed were more clever than he. I think that’s how he views Helena, his life partner.

The story of his romance with Helena, a career woman ten years his senior, read like a Harlequin. He saw her step out of cab, spitting angry and wondered to himself who is this woman? Initially she did not want to have anything to do with him. She wore suits and he ran around in his warmup gear.

She’d left home when she was seventeen and worked her way up, and I wasn’t exactly a superstar to her. Or as she put it, “Come on, Zlatan, you weren’t exactly Elvis who’d beamed in.” I was just a crazy guy to her who wore hideous clothes and was totally immature, and sometimes she’d tease me a bit.

He acted (admittedly) like a child, setting off fireworks and living in a swamp of messy clothes, video games, and trash.

…sometimes I just don’t know how she managed to be so patient with me. She’d been saddled with a little maniac. But she managed, she was strong, and I think she got to see some results too.

They kept their romance as secret as possible because Helena didn’t want the attention. And the press never really caught on because although she is a gorgeous blonde, she didn’t fit the football wife prototype. Even Zlatan felt that Helena was a stabilizing force in his life and he seems to also acknowledge she sacrificed a lot to be with him.

Eschewing alcohol because his father is alcoholic and drugs because he knows he has an addictive personality, Zlatan collects cars, sometimes watches (there’s an absolutely charming story about a watch, a stockbroker, a video game and what Helena calls Zlatan’s internet date), and video games. Zlatan is probably playing Call of Duty right now although he tries not to talk so as to not give himself away.

Zlatan acknowledges that he made mistakes, such as when he let his anger get the best of him causing him to be banned for a few games. Is he a good teammate? Perhaps not but he loves to win and he puts every ounce of himself out on the pitch to win but he also seems to be in it for himself, to win personal achievements, to strike off certain championships from his bucket list of wins. He doesn’t hesitate to rub in his success, but I wonder if that is partly due to him wondering if he belongs.

There had been a lot of Marco van Basten in my life. I’d inherited his shirt number and I was supposed to resemble him on the pitch and all that, and sure, it was flattering. I was starting to get tired of it, though. I didn’t want to be a new van Basten. I was Zlatan, nothing else. I wanted to scream, No, don’t bring that guy up again, I’ve heard enough about him. Sure, it was as cool as anything when he turned up in person—it was like, Wow! Is he talking to me?

When I was writing this review, I kept thinking that Zlatan is the type to go around and comment on reviews, disagreeing with the interpretation. 99% of the book seems like a response–a set the story straight sort of thing–to combat all that has been written about him in the press from the blow up with Guardiola (he deserved it)  to the kicking teammate Antonio Cassano in the head (it was a love tap).

It was absolutely the right book to read during the fervor of the  World Cup. Apparently Zlatan said that this year’s World Cup would be better if he was in it but Sweden was edged out in qualifying rounds to Portugal and thus we’ll miss the potential for kicks like this.

As sports memoirs go, this book was incredibly entertaining and very genuine. While Zlatan’s interpretation of events may be colored by his own selective memory and interpretation, it definitely felt honest. For fans of memoirs and fans of sports, I’d recommend this. I was riveted. B

* I know Zlatan was insulting about the US’s team but perhaps Tim Howard’s performance won him over.