REVIEW: How to Mend a Broken Heart by Amy Andrews

Sunita is usually our go to reviewer for medical romances but I saw this on NetGalley and wanted to give the book a whirl.  This is a quick but emotional read.  The two main protagonists are a previously divorced couple whose marriage disintegrated after the death of their son. They reconnect ten years later when Fletcher, the husband, comes to his ex wife, Tessa, with a request.  His mother is suffering late stage Alzheimer’s and needs in home care. Tessa is a nurse and Fletcher would rather the care come from someone who loves his mother than a stranger. 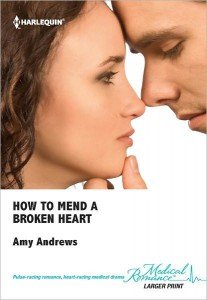 It’s apparent early on that Fletcher has never fallen out of love with Tessa and Tessa feels the same tug of attraction that brought the two of them together initially.  Tessa is the harder nut of the two. She is determined to subsume all those feelings that she had – both happiness and grief – when she was married to Fletcher.  Both of them are heavily burdened by guilt.   Tessa decided to comparmentalize everything. No mentions of her son, ever. She only allows herself a small portion of grief and only on her son’s anniversary of his death.  She shut herself off from her husband and her friends.  She left her job as a nurse at the PICU and took a new position as a geriatric provider.

The loss scenes were palpable and sometimes difficult to read as a mother myself.   The medical aspect wasn’t overpowering.  It was just enough to make you believe that the two characters were familiar with medicine and the practice. It played a role in their grief. Tessa went to work at a nursing home. Fletch was driven to become an expert on child hypothermia.

Fletch’s point of view is focused on his love for Tessa and his regret that he hadn’t fought harder for her.  After a year, he sought the solace of another woman and fled to Canada alone.  He views the past ten years as a waste and is determined to fight hard for Tessa and win back her love and perhaps create another family with her.  Tessa’s point of view is focused on first managing her grief and then grappling with Fletch’s nephew, so similar to her lost son and dealing with Fletcher’s mom.  In some ways the mother’s Alzheimers was a convenient plot device.  Fletcher’s mom’s memory lapse forces Tessa to remember how good she had it with Fletcher, both the passion and the love.  I’m not familiar with Alzheimers (only dementia) and thus I don’t know if this was accurately portrayed.

The story seems to rip by rather quickly and neither are emotionally healthy at the end, but they both acknowledge this. Thus the end of the story is merely the beginning of a new HEA for them.  It was a strong emotional story with quite a bit of passion but perhaps too easily resolved. They were both in serious need of therapy.  B-