Review: How Hard Can It Be? by Robyn Peterman

This book was the most fucked-up bag of wonderful crazy ever. I will say right up front that it’s getting a B because as a romance it works on the surface, but the hero isn’t deeply drawn and the real romance going on in the book takes a back seat to the wonderful crazy.

What happens when an accountant decides to grab life by the horns and try something new? Apparently a pirate named Dave, a lot of pastel fleece, and blackmail—just to start with . . .

Visualize and succeed, Oprah said. I was sure as hell trying, even if my campaign to score a job as the local weather girl had ended in a restraining order. Okay, TV was not my strength. But a lack of talent has never stopped me before. Which is why I’ve embarked on a writing career. I mean, how hard can it be to come up with a sexy romance?

I found you by way of your novella, “Pirate Dave and His Randy Adventures: A Career-Ending Spoof.” Since the novella is the book the heroine wrote, I figured I should read the heroine’s book before I tackled the spoof. 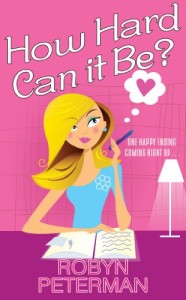 I decided to try this in spite of the fact that I don’t like slapstick comedy or humiliation humor, and I figure there’s a 50/50 chance of a book like this with such a cartoony cover could be exactly what I don’t like. But I got lucky.

Rena, an accountant with an over-the-top personality who doesn’t fit in at her office, is directionless in her personal life and is always looking for the next thing to fill her time and, more importantly, a lack of a personal feeling of accomplishment. Her escapades in trying to satisfy this need are as over the top as she is and gets her in a lot of trouble sometimes, but they don’t come off as TSTL, just misguided and a little desperate.

Her next idea is to become a bestselling romance author, again without having done the requisite research into how one becomes one of those, because how hard can it be to write a romance novel? So, with some preconceived notions, she crashes what is basically a critique group. It’s not quite what she expected.

“I’m sorry,” I interrupted. “I thought this was a romance writers’ meeting.” My insides clenched. This couldn’t be right. I must be in the wrong room, or hopefully the wrong building.

“Oh, aren’t you a lovely thing.” Nancy smiled and squeezed my hands. “Are you a cover model?”

“Fucking awesome,” the Shoshanna woman yelled back, giving me a big thumbs-up.

Shit, this was not turning out the way it was supposed to. These women were very sweet; they’d all hugged me when I arrived like I was a long-lost friend. Okay, that was a little unsettling, but as well meaning as they were, I didn’t want a Bunko group of grandmas who cussed like sailors . . . I wanted Dorothy Parker and the Algonquin Round Table, where we would drink wine and chuckle at our own witty brilliance. Speaking of witty brilliance, where in the hell was the Queen of Bodice Rippers? I wasn’t sure how much more information my brain could hold about bondage, whippings, and hot dishes before it would explode.

“Excuse me,” I said, interrupting Shoshanna LeHump’s in-depth explanation of the benefits and sanitation of butt plugs. “I thought Evangeline O’Hara was a member.”

The room went silent. Everyone stared at me like I’d grown three heads. All of the lumberjack-looking softball-playing grandmas narrowed their eyes at me.

“Are you friends with that viper bitch whore from hell?” Nancy, the storybook granny, inquired kindly. Her words and her tone did not match. Clearly I’d heard her wrong, but on the off chance I hadn’t, I refused to ask her to repeat herself.

Everyone’s smiles returned when they realized I wasn’t best buds with the viper bitch whore from hell. These seniors had some amazing vocabularies. I made a mental note not to get on their bad side.

“Oh, thank God,” Shoshanna LeHump grumbled. “I was worried that stinky hooker sent a spy in to steal more of our ideas.”

In the meantime, a hot dude has moved into her apartment complex, whom she only sees from behind, and instantly falls in love with his ass. When Rena gets dragged into the villainess’s blackmail scheme, she has to violate the restraining order at the TV station to deliver a package, where she sees another hot dude. She debates whether to take a chance and approach him or to deliver the package. Even though she has already committed her heart to her new neighbor’s ass, she decides to approach the dude. And that’s where her escapade escalates.

Her violation of the restraining order gives the villainess a way to blackmail Rena into writing her next romance bestseller, which she is going to self-publish in three weeks. Since the villainess isn’t terribly bright (just mean enough to trap people into doing her will), she thinks the idea of a “time-traveling vampire warlock with erectile dysfunction and his conjoined lady loves, Laverne and Shirley” is wonderful and totally believable. So Rena, “an accountant with no discernible literary talent,” sets out to write this to end the villainess’s career.

Pirate Dave stared at the hat full of assholes[1] and wondered who had sent him such a lovely and unusual gift. He considered trying to fuck them, but since they weren’t attached to anything, he decided against it.

Apparently he had a secret admirer.

He’d received daily gifts for a week. Shirley was fit to be tied. She’d tried to tempt him away from thoughts of his admirer by swinging naked from the chandelier in the galley. Bad fucking move on Shirley’s part. During her buck-ass naked extravaganza, she’d accidentally blinded six crew members standing nearby when she gouged their eyes out with her toe.

Her lack of remorse was a huge turn-on for Pirate Dave, but she only had one vagina. Pirate Dave ripped open a box of Salty Skeeboodles and shoved them in his mouth. He left the crumbs from his snack embedded in his chest fur. Lice need to eat, too.

He looked down at his expanding stomach and realized he couldn’t see his peckers anymore. His inability to find a fuck buddy with two lady holes had led him to eat. A lot. He cared not that his once nicely indented ass had turned as flabby as Poseidon’s.

As I said in the beginning, the hero is not deeply drawn, but then, he’s an uncomplicated sort who is attracted to Rena’s zaniness but little tolerance when it crosses the line of (for him) believability, which is where the angst comes in. There is very little zany or funny about the romance itself, which I appreciated because it balances out the crazy with its tender moments and (relative) ordinariness and demonstrates Rena isn’t that unreasonable.

The book is told in first person past tense and it is definitely a heroine-centric book. Rena is never actually TSTL. She analyzes the situation and constructs a smart scheme to extract her and her porno-writing grannies from their hellish situation. It is also an affectionate poke at romance. How many authors have been quoted as saying, “I put the book down and thought, ‘I can do better than that. How hard can it be?’”