REVIEW: Hotter Than Ever by Elle Kennedy 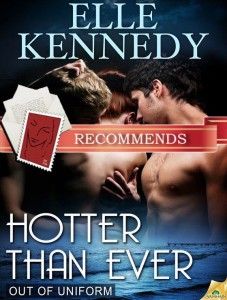 Claire McKinley has been left at the altar by Dylan’s brother. Dylan Wade has never been a fan of Claire but when his brother does a runner, he takes Claire home with him to San Diego. Someone in the Wade family has to stand up for Claire and the task is left to Dylan who has a self professed hero complex.

The dynamic in Dylan’s apartment is rife with sexual tension. Dylan and Aiden Rhodes have an on again / off again sexual relationship and its one that only Claire knows about as the two have tried to keep it a secret. Dylan is a SEAL, his brother is a “bit of homophobe”, and Aiden is in Navy Intelligence.

There are four things that really make this book work for me. I will list them:

Dylan believes Claire to be something that she isn’t but his realization that Claire is a decent person doesn’t change over night and it comes through seeing her take the jilting with some grace as well as comparing and contrasting her behavior with his brother’s actions. His brother keeps one upping himself on the jerk scale so it is fairly easy for Claire to look like a saint. Claire pretty much tells it like it is which Dylan took to be uptight and snobby. But the misconceptions aren’t resolved just by a little sexual tension. In fact, the attraction between the two only serves to heighten their confusion.

On the other side, Claire believes Dylan to be gay so the unrelenting sexual tension that she feels near him is confusing and provides a sort of comic angst. I loved the word “perplexing” here.

On the minus side, the barely-there dress had resulted in an hour-and-a-half-long helicopter ride in which Dylan’s green eyes had been glued to her breasts.

Which was perplexing, because…he was gay, right? She still couldn’t figure it out, but the memory of Dylan’s tongue in another man’s mouth was completely incongruous to the way he’d been ogling her on the chopper.

It should be noted that Chris, the jilter, wasn’t all bad. He loved his mother, so there’s that.

2) The dynamic of the three.

Dylan and Aiden’s relationship is complex because Dylan, in particular, enjoys women from time to time so he’s perplexed about what Aiden and Dylan have going on between them. Now I think that this might be the hardest part of the book to swallow. Would Dylan and Aiden have been happy without Claire? I think so because Dylan’s feelings toward Aiden are very strong but Dylan is happy that Claire is part of the relationship and so is Aiden. That’s how it is written. There are scenes where the Dylan and Aiden discuss why they want more and there are scenes that show how Claire adds to their relationship instead of detracts from it. I bought into that fantasy but the lust turns to love awfully fast. I guess the success of the book for others depends on upon their acceptance of it as well.

Dylan sounded perturbed. “Why is that? And why…” Now he was the one stalling.

“Why what?” Aidan prompted.

“Why can’t we stick to the whole one-on-one thing, just you and me?”

The dialogue of the guys is great. Here’s Dylan telling his brother exactly what his role in the wedding should be:

“I’m not breaking up with your bride for you, damn it.”

“But you’re the best man,” Chris protested. “And you’re my brother.”

“As your best man, I’m in charge of holding on to the rings and standing next to you at the altar. As your brother, I’m responsible for supporting you and clapping politely when you kiss the bride. Neither of those roles requires me to call off your fucking wedding!”

Then there is the scene where all the guys are at a party watching a sporting event and because of an overload of testosterone, they bet who could take the other. And one comes home a black eye. The interaction between the males in this story has always been stellar. Or here’s Seth, one of the SEAL teammates lovingly described as “rough around the edges.”

“And you and Aidan didn’t take advantage of that and—cover your ears, Shelby—double-team her? Prudes.” Seth shook his head in mock disgust.

“Why do you bother telling me to cover my ears?” Shelby demanded. “You don’t even give me time to do it! And besides, since when do you care about offending my delicate sensibilities?”

“I live with kids now,” the scruffy-haired SEAL replied. “I’m pretty sure I ask Sophie and Jason to cover their ears at least twenty times a day.”