REVIEW: Hot Under the Collar by Jackie Barbosa (Lords of Lancashire #2)

“Despite the old saw about third sons being destined for the church, no one ever expected the rakish, irresponsible Walter Langston to take up the collar, least of all himself. After an accident renders him unfit for military service, however, he has few other options. When he’s given the post of vicar at a parish church in a sleepy, coastal village, he’s convinced he’ll molder in obscurity. Instead, his arrival brings a sudden resurgence in church attendance…or at least, the attendance of female parishioners. As word of the eligible young vicar spreads, every well-heeled family for miles with a marriageable daughter fills his pews, aiming to catch his eye. Unfortunately for these hopeful members of his flock, Walter’s eye has already been caught—by the one woman who doesn’t come to church on Sundays.

Artemisia Finch left a lucrative career as a celebrated member of London’s demimondaine to care for her ailing father. Returning home hasn’t been easy, though, as her past isn’t even a well-kept secret in the village. When the new vicar arrives on her doorstep, Artemisia is determined to send him on his merry, pious way. But Walter Langston is nothing like any man of the cloth she’s ever known—he’s funny, irreverent, handsome, and tempting as sin. Falling in love with a vicar would be a very bad idea for a former courtesan. Why does this one have to be so hot under the collar?”

I’ve been reading romance novels for the past 15 years and some, let’s say, ennui has crept into my soul. I’m sad to say that I often don’t even get past the back blurb of many books before deciding that I have no interest in trying it. Oh, a penniless governess – yawn. Let’s see, an outrageously smexy Duke – read it. Bored, bored, bored. The description of the hero as a rake almost caused me to stop reading about “Hot Under the Collar.” But wait! He’s a vicar – okay, I’ll keep reading. And then I hit the second paragraph and – whoa! she’s a kept woman. It didn’t sound as if there was any plot tied-in-pretzel-knots-to-keep-her-a-virgin either. A true member of the demimonde. Well, I’ll be. I immediately told Jane “sign me up for this one.” 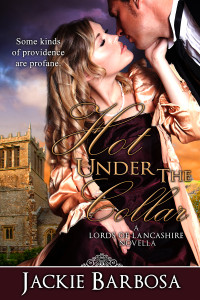 As soon as I started reading it, I knew I’d found a winner. The hero, Walter Langston, might have been around the kept women of the London haut ton but as he wryly admits to Artemisia, he did more chasing than catching and she, yes he remembered her from when he was still in the Army, was far above his means. Walter is a delight. He’s handsome but not decadently so. He’s got a good head on his shoulders and is not prone to puff up his consequence. He’s not too bashful yet also not smugly sure of himself. He’s amazed that a woman as intelligent, sophisticated and beautiful as Artemesia is interested in him and joyfully enters into whatever length relationship she’s willing to have with him.

He’s also thoughtful and has a care for her and her feelings. And he’s determined that he’ll make sure she doesn’t regret anything and that he’ll wow her world, so to speak. Walter also realizes that he’s truly found a home at Grange-Over-Sands. To his astonishment, he likes it here. He likes being a vicar and making a difference. Helping people muddle through the issues and problems they bring to him gives him immeasurable satisfaction. Walter is an A-OK guy. And he really does have a lovely sense of humor even if it is at his own expense.

Artemesia is, as advertised, a fallen woman. Walter immediately knows something doesn’t add up in the story which his housekeeper relates about Artemesia’s seduction by a local toff’s son and the subsequent numbers of men who stepped forward claiming to have “known” her too. This is not the woman he heard about in London who was nothing if not discriminating in who had access to her favors. The more he comes to know Artemesia, the more he likes her – and not just for any nooky. Sure, the nookying is better than fine but it’s the woman herself who fascinates and delights him. And who makes him begin to hope that he might just be able to pull off the miracle of the century.

Meanwhile, Artemesia is frank with herself about what she wants. She’s missed the comfort and pleasure of a man. Walter looks mighty fine to her in his stiff, black coat and she instinctively knows he’ll look even better out of it. So she makes it happen. I love this – that Artemesia is the one in charge. Let’s talk about the sex. It’s hot and it’s good. But best of all, it means something. I’m tired unto death of books that cram in the sex in a meaningless way. My eyes glaze. My fingers flip pages. My jaw cracks from yawning. I skim because it’s becoming numbing. Oh, here we go with another 5 page sexathon. Pfffft. Except I didn’t feel that way about Artemesia and Walter’s weekly meetings. You show how the connection they’re making is not just physical but emotional. That what they’re doing together isn’t just tabs and slots and orgasms. It’s caring and joy and “this person means something to me.”

She’s done financially well for herself and knows that she’s actually better off because the marriage her father tried to make happen didn’t. Her fifteen year old self was dazzled by a cad and she knows she would have been miserable as the cad’s wife. Life gave her lemons and she boldly made some damn good lemonade. But she’s also realistic. The fine folk of Grange-Over-Sands don’t spit on her in the street but neither do they welcome her into their homes. She can live with that. She’s determined to keep living with it even after Walter begins to float his crazy idea of them as an item. She’s no martyr, thank God for that, but she’s a pragmatist and there’s no way that the town vicar can expect to marry a whore. Or can he?

I did wonder how you would pull this off. It’s 1803 in a small Cumbrian town and facts are facts. Fall from grace and society is not going to welcome you back with open arms. Plus you added some sprinkles onto the ice cream of problems by having Walter not only be good as a vicar but to find real satisfaction in the job. If things turned ugly, not only would their HEA not occur but the town would have lost a caring man and he would lose something that was making him whole.

People who don’t like inspies or religious themed stories might actually like the way religion plays a role in smoothing the roadblocks to happiness for all. All except the cad, of course, who gets his in a believable and public way. So perhaps it’s a bit fairy-tale-ish to imagine that the outcome as described will take place. I can’t help but remember that Walter’s living is controlled by a member of the aristocracy who might not be pleased at the vicar for not raining hellfire and brimstone on a fallen woman’s head, or that an Earl’s son was publicly shamed – not that he didn’t deserve it – or that Walter himself is the son of a Viscount and could be viewed to be lowering himself. Still, the satisfaction at Walter and Artemesia finding their haven in each other and being accepted is sweet enough for me. B

(This book appears to be free at Kobo)