REVIEW: Too Hot to Handle by Tessa Bailey

It’s no secret among your many fans that you are known as the ‘Queen of the Dirty Talkers’. In a romance world awash with billionaire heroes, your blue collar men are down to earth, ‘tell it like it is’ kind of guys, alpha heroes to the core. While up to now your stories have mostly centered on big city men and women, this new venture takes a decidedly different turn, having set your sights on small town America and featuring a family of two brothers and two sisters, the Clarksons. 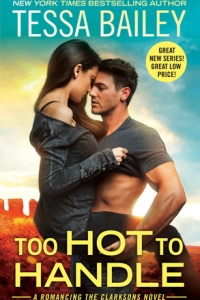 The Clarkson siblings are on the road to New York, following the wishes of their late mother. Having her mother’s restaurant burn down is the impetus for Rita to pick up her mom’s journal and in it, the directions for the four somewhat estranged siblings – Rita, Aaron, Penny and Belmont, to head to New York for a New Year’s dip in the ocean. For years the four have been somewhat at odds with each other, never close enough to count on one another when times got tough, but they’ve all piled into one suburban, heading off on an adventure together. On route, car trouble lands them on the side of the road in Hurley, New Mexico, and into bad boy motorbike riding Jasper’s care. Jasper runs a bar, and is getting ready to open a restaurant – how fortuitous that he happens to land upon a stranded chef! Rita and Jasper have each got something to bring to the table, including some serious self- esteem issues. Can an unexpected stay turn into a new dream for Rita?

An adventure indeed! Piling four siblings into one car for a road trip, each carrying slights and bruises from their relationships with each other is a feat, and one taken on with gusto here. I really like stories that feature family dynamics, especially when said family is definitely not a picture perfect one. Though this is Rita’s story, the importance of her relationship to her siblings (and theirs to each other) is clear from the beginning. The fact that they are willing to take this trip together shows that they want to mend the fences between them as well as honor their late mother, and bickering and banter aside, they are all very likable characters. There are several scenes that feature the four siblings together, and in smaller groups, as they start to confide in each other, baring their secrets and thereby finding out that they really do have each other’s backs.

Rita is dealing with the fallout from having lost her temper on a television reality cooking show, her fallen soufflé indicative of her failure to live up to her mother’s chef reputation. It’s just another area where she’s found herself lacking. When her mom’s restaurant burns down, an action that precipitates their cross country journey, she carries the guilty knowledge that she could have possibly prevented the fire, but couldn’t stand the thought of one more day trying to fill her mother’s shoes. It’s in this frame of mind that she meets Jasper.

Jasper is the town whore. Well, he was the town whore, until about two years ago when he finally woke up from his days of drinking and sex to realize that he had lost any respect from the townspeople that he might have had. He’s spent the last two years celibate, building back his reputation by running a successful bar, and working on his dream of owning and running a quality restaurant. When he first sees Rita, rescuing her on the side of the road and bringing her into town to get a mechanic for her car, his attraction to her is instantaneous. Yet he is determined not to act on it. With her he has a clean slate – she knows nothing of his past and his reputation. Rita feels the same attraction but for their first day at least, he keeps her at arm’s length. He wants her to know him, the real him, not just the guy who can please her in bed. Rita takes this as a rejection, but learns quickly why, and makes it clear that she is interested in him as a person. He’s friendly and funny and outgoing, a man who doesn’t know about her past either. Together, they can make a fresh start.

Readers can rest assured that the sexy times, once Jasper and Rita establish that they want each other for more than a quick lay, are still plentiful. Jasper has the dirty talking hero vibe down pat, and even though their first couple of intimate encounters don’t end up with them in bed together, it’s clear that that’s where they are headed. It’s also clear that Rita knows how to lash out at Jasper when he inadvertently hurts her – all she has to do is go straight to sex and skip the communication parts. To be honest, the sex was steamier than I expected (I know, it’s a Tessa book, I should have been prepared). Those who don’t care for purple prose might find some of the language a little over the top.  And this is an insta-love book – the whole story takes place in less than a week (3 days for Jasper and Rita to decide they are ‘it’ for each other), so readers who don’t buy that you can find your soulmate so quickly might scoff at the idea of Rita ending up in this small town permanently. But Jasper’s offer of redemption comes at the right time for Rita, a balm to her soul and giving her the sense of direction she’s been looking for.

For the first in a series, it’s got lots going for it – likable characters, a very steamy romance, and a definite sense of where the next in the series is headed, with a teaser chapter for Aaron at the end of this book.  It is a series I’ll be following closely and gets a solid B from me.