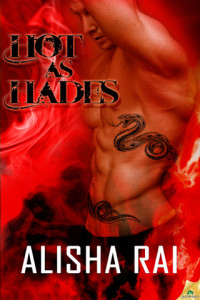 Hot As Hades opens up with Persephone dropping onto Hades’s lap in the Underworld. She’s naked and has no clue why she is there, and he’s quite happy that she’s naked and in his lap until he finds out that she is Demeter’s daughter. Then he’s angry at her presence and that he was lusting after her. Persephone  is attracted to Hades, but she’s just as confused at how she showed up in the Underworld. It turns out that both of them are being manipulated – Zeus has transported Persephone into the Underworld to hide her for her own good. Now she and Hades must fight their growing attraction to each other.

Seeing as this is an erotic romance, they don’t fight very hard. They soon become lovers and it builds into a more romantic relationship. Persephone is very much not a victim in this story. While she is outclassed power-wise, she has strengths of her own and is quick to give her opinion to Hades. Even though he’s quite blustery, he doesn’t scare her or intimidate her.  She has interest in everything the Underworld has to offer, and doesn’t shy away from the uglier aspects of the kingdom. Hades appreciates Persephone’s strong personality, as most people are frightened of him. And when they decide to have sex, it’s Persephone that instigates the physical relationship.

There were parts of this story that were very amusing. Hades had several funny lines, while Persephone was more of a straight (wo)man.

She beamed as she pushed back her chair and stood. “You’re welcome. Is there anything else I can do for you?”

I liked that this was a very lighthearted and modern flavored romance between the two gods. The way their powers and immortality worked was not explained much, nor the time frame. Both characters spoke with very modern slang and the clothing and settings were modern at times. It was difficult for me to parse the setting, and after a bit I gave up and just enjoyed the ride.

There was one sour note for me that was brought up in the story – Persephone as Demeter’s  (adopted) daughter. Demeter is also Hades’s sister. This makes Hades the love interest and uncle both. While the characters bring this up repeatedly in the beginning and the reader is reminded there is no blood relation between the two or a prior familial relationship,  it made me uncomfortable each time it was brought up. I couldn’t help but think that if this was a contemporary romance, we’d be venturing into Jerry Springer territory.

Overall,  a nice, fun, sexy brief read with only one false step. B for me.