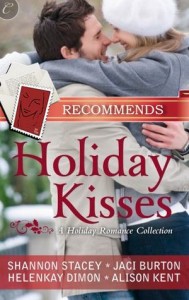 This Time Next Year by Alison Kent. Brenna Keating is traveling to her grandmother’s house for their annual Christmas celebration when a storm strikes and she is stranded after she loses control of her vehicle attempting to avoid a deer. A gruff man comes to her rescue and carries her off to his cabin. Dillon Craig knows an awful lot about Brenna but she’s never heard of Dillon Craig, a military doctor who has sought refuge in the mountains and provides medical services to its residents, like Brenna’s grandmother. Brenna views her ignorance of Dillon with suspicion. She’s close with her grandmother and knows the story behind every person on the mountain. Except Dillon. And Dillon knows what Brenna does for a living, what her parents do, that she is about to leave for Africa to offer her nursing services to disadvantaged.

Like most stories about small communities, this story celebrates the close knit community while still providing Dillon the space to heal from his war experiences. The downsides for Dillon, if there are any, is having too many casseroles from the single ladies but as a refuge, it’s perfect. There are no surprises here and the pairing of a nurse and a doctor who are both interested in providing services for the underserved is convenient. Still, it’s hard to not be moved by Dillon’s grief over the men he couldn’t save and Brenna’s melancholy over the limited time she has left with her aging grandmother. B-

A Rare Gift by Jaci Burton

Calliope Andrews and her partner are ready to expand their day care business and Wyatt Kent of Kent Construction is sent out to bid the job. Wyatt is reluctant to undertake this task because Calliope is the younger sister of his ex-wife. While Wyatt professed to be over his ex wife, even the mention of Cassandra, the ex, could cause Wyatt anxiety. Calliope has had a crush on Wyatt since the first time she saw him in her house, she aged fifteen and he twenty-three.

Wyatt’s lingering unhappiness over his failed marriage and his constant comparisons between Calliope and Cassandra were discomfiting. The emotional character arc for Wyatt included letting go of his animosity toward Cassandra, but the ease at which he later moved beyond this didn’t match the intensity of his anger. I would have liked to have seen more accountability from Wyatt as well in that his marriage failed not so much because Cassandra was horrible but because they were two obviously different people with different dreams (big city v. small town etc) While I liked Calliope’s assertiveness, I couldn’t help but wonder if she wouldn’t be better served by a different Kent brother, one who didn’t have so much baggage that was so intimately tied to Calliope. C

It’s Not Christmas Without You by HelenKay Dimon

In light of the settings of the other three stories, this Washington, D.C. placed story provided a nice respite from the small town. Carrie Anders is thriving in her position as an employee with National Museum of Women in the Arts. Her job is great (she’s in charge of a lecture series surrounding the museum’s Mary Cassatt exhibit), her co workers are fun and if she misses her ex boyfriend, Austin Thomas, the pang of loneliness is chased away by memories of the breakup.

Carrie and Austin were high school sweethearts but their long dating history was no proof against their varying dreams. Austin is intent on continuing his family’s landscaping business that was based in Halloway, two hours away from Georgetwon, while Carrie longs to be steeped in the world of art and artists.

The love isn’t enough theme is a great one for a genre that is built on the healing power of the emotion. While both Carrie and Austin acknowledge their feelings for one another, getting back together means only more pain when they are both faced with the inevitable breakup that results from one party refusing to give up on their own dreams. Both Austin and Carrie make cases as to why their dream is important. Austin’s ties are deep and generational while Carrie’s love for art cannot be slaked in her small town. Sacrificing dreams now leads to bitter recriminations later. The ending has no easy answers but I was satisfied with it. B

Mistletoe and Margaritas by Shannon Stacey. This was my favorite. Stacey has a real knack for short stories. I still remember her adorable electrician story from last Christmas. Justin McCormick had loved Claire for years, from the time he and his best friend, Brendan Rutledge, met her. Whether it was fate or circumstance, Claire spent a few moments alone with Brendan rather than Justin one night and that was all it took. Claire and Brendan became the couple and Justin became the friend. Brendan died in a terrible car accident and his loss brought Claire and Justin closer together but Justin is at the end of his tether. His relationships have all been abbreviated and he knows that his friendship with Claire is what is preventing him from even trying to commit to another woman. He is determined to cut his losses, but wanting to sever his relationship with Claire and actually doing it is proving painful. It’s not just that he loves Claire but that his whole life is entertwined with his. Brendan’s family is his family. Their holiday traditions were his as well.

There was a good balance between Justin being a masochist and trying to do the right thing. It never seemed right to pursue Claire and yet his love for her wouldn’t allow him to be anything but supportive and kind. Claire wasn’t intentionally leading Justin on. She had no idea of his feelings toward her and she had spent the last two years mourning. But she was young and she missed intimacy and companionship and began to awaken to the possibility of a new love. B

The writing in the anthology is very good. All four authors have a good ear for dialogue and the emotions nor the sexual encounters aren’t forced even in the shortened format. My guess is that the favorite story of each reader will depend on which type of romance they are drawn to best. I’m a sucker for the unrequited love and I think that is why I liked Stacey’s story. What I appreciate is that none of these holiday stories are over saccharine.  It’s about two people finding hope and comfort and companionship with one another at a special time of the year. Two years, two good anthologies. The Carina Press holiday anthology is becoming a wonderful tradition.

Note: Each story can be purchased separately.