I was interested to read your debut novel for two reasons. First, I love the title. I’ve always thought being a husband’s harlot is one of the best parts of marriage. (Plus, it reminds me of a classic song, the number one single from 1973, Charlie Rich’s Behind Closed Doors. I’m humming it as I write.) Second, I think it’s impressive you’ve taken your 2010 winning manuscript, (Her Husband’s Harlot was a 2010 Romance Writers of America Golden Heart Finalist) and turned it into a successfully selling novel: It’s currently the 36th most popular Regency romance at Amazon.com and has a five star reader rating. 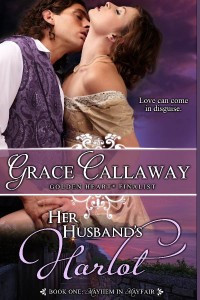 I enjoyed your book. You utilize a typical regency plot—virginal girl marries sensually experienced and sexually voracious man whose heart she longs to win—and give it an innovative rendering.  I loved the opening scene in which your heroine, the well-bred Lady Helena is wandering the halls of the Nunnery, a high-end London brothel, determined to track down her husband Nicholas and beg him not to consort with whores but to consort with her instead. The two have been married just a month and, after a truly awful experience for both on their wedding night—she practiced “ladylike forbearance” until the moment she screamed in startled pain; he jumped off her, ran out of the room, horrified he’d hurt her—the two barely speak. Helena, though, longs for another chance and so, upon learning Nicholas will be at the bordello this evening, she slips on the clothes of a tart, paints her face, dons a wig and a feathered mask, and goes husband hunting.

She finds him, hidden behind a curtain, watching an exceedingly bawdy threesome. Nicholas has been in sexual hell since his wedding night. He is consumed with lust for his wife, but sees her as too genteel and pure for him. He thinks, after their wedding night, she wants nothing to do with him. But he’s a guy with big needs and even beating off three times a day, while fantasizing about fucking the hell out of Helena, is neither slaking his lust nor assuaging his loneliness. He came to the Nunnery thinking he’d find relief in another woman’s quim, but found, much to his despair, he only wants his wife.

Usually, in romance novels, the hero doesn’t ever have sex with another woman—many romance readers have zero tolerance for unfaithful husbands. In your book, you take a different path and I liked that. When Helena literally bumps into Nicholas, he doesn’t know her. The light is dim—they are swathed in heavy velvet drapes–, she’s wearing a mask and, most importantly, in Nicholas’s mind, Helena is a paragon of virtue; there’s not a chance in hell his highborn, pristine wife would ever be rubbing up against him in a den of vice.

The minute the room is emptied of the threesome, Nicholas jerks Helena into his arms, lays her flat on the nearest table, yanks down her bodice and unbuttons his trousers. He is aflame with desire for this woman who is not his wife. Helena, who got quite an education from watching the ménage a trois, is just as desirous of him. She realizes, though, he doesn’t recognize her, and, afraid he’d condemn her for her wantonness—she speaks to him in French in an altered voice. The two have explosive sex—I love the bawdy language of your sex scenes—after which Nicholas drops a fifty pound note on the table and abruptly leaves.

Nicholas, of course, feels worse than ever after this event. He’s already believes he’s not a worthy spouse for Helena and now he’s gone and fucked a whore while imagining he was defiling his wife. Helena, now that she knows how great marital bliss can be, is more determined than ever to woo her husband. Here again, you don’t take their story down the expected path.

Helena does everything right and Nicholas behaves like an ass to her. She tries to talk with him, works on de-dowding herself, and—I really liked this—gets angry at him when he doesn’t respond pleasantly to her. The nicer she is to him, the nastier he is to her. Normally this dynamic would irritate me, but you make it work. You do a wonderful job of showing why Nicholas thinks he’s so unworthy of Helena.  Nicholas is not from the privileged class. He grew up alone and wretchedly poor in the slums of St. Giles.  He was well on his way to death by noose or starvation when he was given a chance by the owner of a shipping company. Nicholas worked his way up, ethically, to managing the company and when the owner died, he left it to Nicholas to run. Nicholas now has money and a title, but he still sees himself as the abused boy he once was. He’s consumed with shame for things done to him and the things he did in his vile past.  You write Nicholas’s shame so believably—he may be crippled by it, but you give him just enough emotional flexibility for the reader to believe it’s possible for him to change.

You also do a nice job of making Helena a credible character. She may be from the ton with snotty parents, but she really doesn’t care that Nicholas isn’t from her class. She was thrilled when he courted her and has always found him incredibly attractive. She really doesn’t understand why he doesn’t seem to want her anymore—she knew nothing about sex and thought what happened on their wedding night portended permanent problems. Once she goes to the Nunnery, and experiences successful coitus, she sees sex as a way to connect with her husband. It’s not, however, the only way she tries to forge a bond between them. She asks him about his work, invites herself to meet the Fines (they are the family of the shipping company owner and are as close to family as Nicholas has), and pleads with him to socialize with her. She sees what works, what doesn’t, and adjusts her behavior accordingly. I liked that she works so hard to get her husband to be with her but she never acts in any way that is debasing or untrue to whom she is.

I appreciated the emotional relationship between Nicholas and Helena. I liked the way it evolved and how, over time, both Nicholas and Helena began to trust and rely on one another. I also really liked their sex life. Your sex scenes are incredibly graphic and your characters use fairly blunt, even brutal language, as they couple.  Nicholas is such a sexual person—the way he speaks in bed is the way he thinks out of bed. And Helena has, from the beginning of the book, wanted to become her husband’s harlot. For her, listening to Nicholas ask her if she wants his cock and being able to say yes is an affirmation that all she’s worked for is hers.

I did feel that Nicholas’s self-loathing went on longer than it needed to, but this is a small quibble. In general, I loved the romance in your romance.

I wasn’t as engaged in the suspense plot that comprises a great deal of your book. You have Nicholas being anonymously threatened by some unknown villain. Nicholas keeps getting notes that threaten to tell the truth about his past. This extra level of threat seemed overkill to me. Nicholas is already consumed with fear that if Helena knew what he’d been, she’d be disgusted and repulsed. When he uses the possible blackmail to distance himself further from Helena, it felt heavy handed to me. I also had a hard time caring who was behind the notes and, as the book progresses, the criminal activity at Nicholas’s shipping company. For me, the relationship between Nicholas and Helena was so interesting, I was somewhat resentful when you took the focus off of the two of them and put it on bad guys at the docks.

All in all, though, this is a good book. It’s the kind of debut novel that gives me faith your next book will be even better.  It seems possible the next book will be about Helena’s friend Marianne. (She helps Helena get into the Nunnery in the first place.) She was a great secondary character and I hope to read more about her.

So, again, congratulations. Her Husband’s Harlot is a pleasing, out of the ordinary read.  I give it a B. I enjoyed finding out what went on behind closed doors in your book—it was nice to watch Helena become her husband’s harlot!