REVIEW: Heating Up the Holidays by Marcia James

I enjoy a good ‘second chance at romance’ story and the blurb, which mentioned the heroine standing in as an elf and later corralling kittens, sounded cute so I gave “Heating Up the Holidays” a shot. Mrs. Giggles 83 grade review didn’t hurt either. 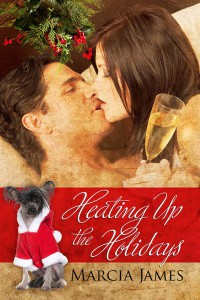 Nicky Paxton and Chris Spencer have 13 years of history. They were hot and heavy in high school but when, after a heated argument about their futures, Chris left Virginia for sunny SoCal while Nicky stayed to attend UVA, they parted company. There Chris got married and had a daughter but after his divorce and his wife’s death, he decided to move back home and set up his own law practice.

When Nicky first sees Chris, it’s not the way she would have planned it – with her looking all sexy and with a wedding ring. Instead she’s filling in for a sick elf at her family’s department store while the kiddies meet Santa. And while she’d just as soon avoid seeing Chris until he – she mistakenly believes – heads back to California, he’s determined to see if the zing of attraction he immediately feels for her is something left over from their teenage romance or if it might just be the real adult thing.

This is more a novella but it’s a perfect size for fitting in between wrapping presents and making eggnog. Since Nicky and Chris already have a history, you can get right down to exploring their continuing attraction for each other. I like that Nicky hasn’t spent the last 13 years of her life pining for a man with whom she only shared one passionate kiss. I hate stories like that as they make the characters involved seem rather pathetic. Instead, these two shared some hot sexing back in the day and in the meantime, Nicky has been open to dating and finding someone else.

I also like that it’s Chris who engineers a lot of their encounters and is the driving force for them getting back together. His mother, who gooses Chris a bit in the “go after her, you fool” department, is delightful as well. She knows who she wants as a second daughter-in-law and she’s going to make sure her son delivers.

Holly, Chris’s daughter, is important in some scenes though you avoid making her too cutesy or cloying. Having two built-in baby-sitters in the persons of her grandparents gives you the opportunity to allow Chris and Nicky to reopen their sexual relationship in steamy ways so I’d say she does, more or less, ultimately fall into the category of a plot moppet.

You manage to suck me into Chris and Nicky’s budding reromance despite the relatively short length of the story. The writing is good, it’s got humorous moments, Chris and Nicky don’t stay locked in a misunderstanding and once that is cleared up, their relationship moves forward – albeit at light speed. Like I said, it’s a great little holiday truffle. B