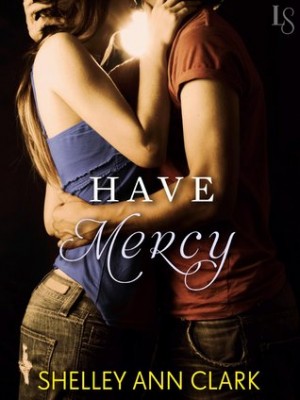 I don’t normally include the book blurb in my reviews, but in this case, it seems significant.

In Shelley Ann Clark’s seductive debut novel, two damaged souls discover that when they’re together, their bodies hit all the right notes.

Rock diva Emme Hayes already broke up one band after sleeping with the lead singer, and she swears she won’t let sex screw things up again. The problem is, her new bass player—a lean, muscular, tattooed mystery man who makes her want to demand his absolute attention—has her so worked up she can hardly carry a tune. Emme promises he’s off-limits. She just doesn’t know how she’ll be able to confine the heat to her love songs.

The moment Tom McKinney lays eyes on Emme strutting around the stage of his blues bar—all curves, eye liner, and teased blond hair—he knows she’s one of a kind. So when she offers him a two-month paid gig to tour with her band, Tom can’t say no, despite family troubles and the bar’s precarious finances. Onstage and off, the music they make thrums in his soul, but Tom has too much going on to get involved—even if he burns to let Emme play his body like a fine-tuned instrument.

Emme’s singing career is on the rise, but no matter how conscientious and professional she is — which is very — scandal still dogs her. When she decides to hire bassist Tom for a tour, her bandmate Dave is uneasy; he senses an attraction between them, and he’s never forgiven Emme for being “a drama magnet.” Also, Tom is known for having to frequently bail his alcoholic sister out of trouble. Emme is undeniably attracted to Tom, with his strong hands, and forearms that flex while he plays, but she swears that it’ll work: “I promise I won’t seduce the new bass player. I’ll make him promise his sister won’t cause problems for us.” As you might guess, neither of these promises can be kept.

This story hit a lot of my happy spots, with exhilarating depictions of creative people who are passionate about their art:

Tom’s nerves coalesced into adrenaline as he played, the sheer joy of making with a talented group of people. He could hear them including himself through the monitors and god damn, they sounded good.[..] By time time the song ended, the notes had wound around them all, the tiny communications coming as second nature; slowing the tempo when Emme nodded, holding a note a little longer with a look from Dave.

The relationship between the bandmates also feels real. There are tensions and conflicts, but also the strength of a long, intimate knowledge of each other.

But I think I loved the sex scenes most of all — which is good, because there’s a lot of them. Both characters are almost newbies to dominance and submission (Tom has some limited experience) and they’re a little tentative, but so excited and joyful as they figure out how it works for them.

‘Okay,’ Tom said, his voice barely more than a brush of breath against her cheek.

‘Good, sugar.’ Tom leaned into her body with the praise, nudging against her warmth. It felt so sweet, the way he nearly melted into her. ‘Now take your cock out.’

The buzz of power was back, her palms tingling, sense sharpening. She could feel Tom’s body responding beside her, his muscles tending, feel the reverberation of his low hum in her own chest.

There isn’t much in the way of formal negotiation or education, but Emme is careful about paying attention to Tom’s physical signals, and proceeds very cautiously when they move into sparking with a belt. (This, and some public play, is as hardcore as it gets; their main form of play is teasing.) Both of their points of view are strongly depicted and sympathetic. I did think that the move from attraction to BDSM happened too fast: in one scene Tom and Emme are making out in the back of the van, and in the next she’s ordering him around, feeling positive that he’ll do exactly what she tells him. The book isn’t all that long and could have used more transitions. But the emotional aspects are so good; it’s the kind of writing that can make any kink seem hot, just because the characters are enjoying themselves so much.

Although the sexual journey is integral to the romance, the personal journeys and relationship conflicts are also a strong point. This isn’t exactly the NA story the cover seems to promise, since Tom and Emme are definitely mature adults, but the problems aren’t that dissimilar: Emme is dealing with sexist and unjust slut shaming, and Tom is weighed down by family pressures that keep him from living the life he really wants. (I also suspect Tom might have ADHD, but if so, it’s not a plot point.) Their solutions are adult solutions, involving thought and honesty; Tom’s story is deeply sad, but couldn’t really happen any other way. I did think the very end gets a bit cheesy and over the top, but it also felt right for there to be a climactic moment for this couple, celebrating their new chance for happiness.