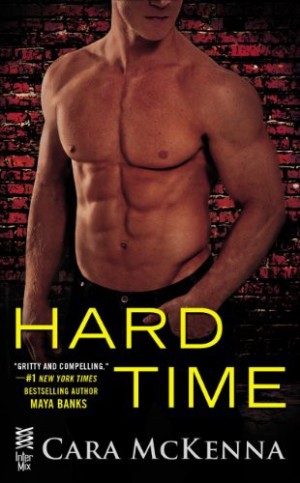 I’ve not been able to connect to every one of your books as I would have liked but I couldn’t help but be drawn to the idea of a felon and a librarian. For all of its forbidden nature, this is a lovely, heartfelt romance.

Annie Goodhouse is the new outreach librarian for Cousins Correctional Facility in Cousins, Michigan.  She teaches various classes each day and one of her students is Eric Collier, a man she can’t keep her eyes or mind off of.

The setup is a bit of a strain. Eric comes on to her by writing a letter full of down home charm and come ons. There’s no question that this sort of thing happens in real life but Annie doesn’t seem the sort to be romanced by a felon who has a prison sentence of ten years.

Annie wants to know what he’s in for and she never really looks it up which, for a librarian, seems odd. Don’t they like knowing a bit about everything and are really good at finding out information?

Nonetheless, she remains somewhat in the dark about Eric’s true circumstances which are as palatable as a felon’s can be, I guess. (In some ways I felt like I was reading a slightly different version of Ruin Me). Because the two can’t flirt openly, they begin to do so through letters. After each encounter with Eric, Annie goes home to read the letter he has written to her. In the letters, he writes beautifully, honestly, and graphically about how he feels about Annie.  And at the end of the letters, he waits for a signal from her to discern whether he should keep writing.

While Eric chides Annie for handing him a letter, there is no real privacy for inmates. His letters to her or her incoming letters to him could be read at any time. The story seems to indicate that there’s some privacy and safety after the exchange but there really isn’t.  There’s an early tension that permeates the story that the exchange might be discovered or that their every increasing closeness will be discerned by a sharp eyed guard.

The entirety of the story does not take place while Eric is incarcerated. Instead the story shifts to post incarceration. And the emotional conflict post incarceration was real and believable. Eric wasn’t driven by revenge or vengeance but the desire to protect his family which he only knew how to express in violence. This desire had to be balanced against her desire to see him not be incarcerated again. She wanted him to value himself higher than he did, to be more selfish.

What was well conveyed was that the change Annie sought from Eric was one that he believed would intrinsically change him in a way with which he would not be comfortable.  The two exchange “I love yous” often but the last one is the one I thought was most meaningful. It expressed a sacrifice which to both of them was really large but might seem small amongst the cosmos.

Annie’s struggle, not only with loving a felon, but grappling with Eric both in prison and without was authentic. She’s a bit naive and she comes off as a little too wide eyed to be engaged in her present activities. She had moved to Michigan to be away from an abusive boyfriend. That she didn’t express more fear around being with a guy who got ten years for assaulting someone was a chink in the realism of the entire story but the two of them are sweet and touching together.

The one downfall of this book is the ending.

It’s very romantic but it felt incomplete. Annie’s father is a law enforcement officer and her family was important to her, much as Eric’s family was to him. The failure of including a scene of Annie and her family dealing with her new beau felt off to me, as if I only received one half of a fulfilling ending.

Overall, though, the letters, the sweetness, the tender eroticism made this book a recommended read for me. B

→ Jane
Previous article: Wednesday News: Free access from Oxford U Press this week, the state of digital journalism, Shakespeare’s plays as webcomics, and celebrating librarians
Next Post: REVIEW: The Geography of You and Me by Jennifer E. Smith