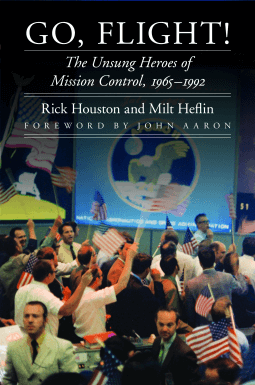 At first glance, it looks like just another auditorium in just another government building. But among the talented men (and later women) who worked in mission control, the room located on the third floor of Building 30—at what is now Johnson Space Center—would become known by many as “The Cathedral.” These members of the space program were the brightest of their generations, making split-second decisions that determined the success or failure of a mission. The flight controllers, each supported by a staff of specialists, were the most visible part of the operation, running the missions, talking to the heavens, troubleshooting issues on board, and, ultimately, attempting to bring everyone safely back home.

None of NASA’s storied accomplishments would have been possible without these people. Interviews with dozens of individuals who worked in the historic third-floor mission control room bring the compelling stories to life. Go, Flight! is a real-world reminder of where we have been and where we could go again given the right political and social climate.

After reading the biography last year on Neil Armstrong and this years beginning of a new romance series on astronauts, I wanted to see “behind the scenes” to those on the ground without whom the US could not have gotten men into space and to the moon. Yeah, this really is rocket science! Space geeks like Tom Hanks might know (of) them but this book offers a chance for the rest of us to learn about them too.

The interviews are in-depth and, at least in the beginning, sorta techy and geared towards NASA geeks. It’s information heavy, not especially lite reading and took me a chapter or so to really get into. But having obsessively watched “Apollo 13” and the miniseries “From the Earth to the Moon,” it all began to come together. There is a reading and learning curve here but the payoff is worth it.

If ever there were a situation of “the right people at the right time,” this is it. These (mostly young in their twenties) men – and yes in the early days all were men, though that eventually changed – were dedicated perfectionists, willing to stay until midnight and come in on weekends to makes sure they got it right. Who were thrilled to be a part of this challenge of manned space flight. There were the expected engineers but some surprising college – and most were first generation graduates in the families – degrees as well including history and, of all things, merchandising. They were whip smart but also willing to learn. Most of all, they were team players. When they started, they didn’t know that this couldn’t be done, so they just did it.

It’s daunting to remember that here, and in the USSR, they were inventing manned spaceflight. From scratch. No guidebooks, no manuals, no references to run and check against when problems arose. Nope, they had to work through the bugs, try to think of anything needed and what might go wrong and how to fix it. The sims might have been rough and the afterhours beer fueled debriefs brutal but lives were at stake and they were willing to endure. And there was always astronaut Alan Shepherd’s prayer to mutter. “Dear Lord, please don’t let me screw this up.” They were risk takers but not reckless, especially after the horror of Apollo 1.

In return, they gave us Apollo 8 – when humans first left Earth’s gravitational field and got to see the first Earthrise as they gazed back at our planet. Apollo 11 – when one “cool as a cucumber” controller knew to ignore some erroneous computer warnings as Armstrong and Aldrin descended to the moon’s surface. Apollo 12 – which got struck by lightning (twice) and was saved by the immortal (among NASA brethren and space buffs) command “snc to aux.” Apollo 13 – well we all know how Houston scrambled once they knew they had a problem. Apollo 14 – when Shepard got to play some golf and the later flights (15,16 and 17) which really were the science gathering expeditions the program was meant to be.

I was delighted that information about NASA’s Space Shuttle years was also included when women and more people of color (originally only one controller of Chinese ethnicity was there in the Apollo days and a handful of women) joined the ranks at the (later named) Johnson Space Center. The cost to family life was mentioned but one son of a controller, after meeting Neil Armstrong mere months before his historic flight, leaves us with a perfect memory letter he wrote for his father years later that sums things up.

But most of all, in the sky I saw the men who made it happen. The men who created the machines. The men who launched them. The men who put others up there and brought them back safely every time. For the first time, I saw my father.”

Thanks for shedding light on the (often) unsung heroes who helped make it all happen. B