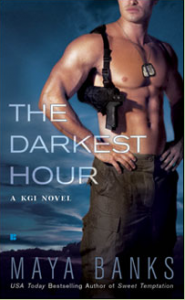 The story opens with Ethan Kelly trying to drink himself into oblivion, again. Ethan had married his childhood love, Rachel, a young girl that became part of his family long before they were married. But Ethan loved his job as a Navy SEAL maybe more than he loved Rachel and their marriage began to disintegrate when he was gone for weeks on end, with no word when he would return. Lonely and alone, Rachel went on a relief mission and only her remains were returned to Ethan. Devastated by how he had failed Rachel, how he never gave enough of himself to her, Ethan can’t live with himself.

On the one year anniversary of her death, Ethan receives a package which suggests that his precious wife is not dead, but has instead been held in captivity in some hellhole in Cambodia. Ethan is struck by two extreme emotions: hope and hate. Hope that his beloved is still alive and hate at himself for allowing her to be a prisoner for over a year. Ethan seeks out the help of his brothers, all former military who run a security firm that rescued people, freed hostages, “blew shit up.” I loved the scene in which Ethan took his case to his brothers.

"Ethan," Donovan began in his quiet voice. "You have to know, this is probably just a hoax. Some sick joke. It might even be someone with a grudge against KGI. What better way to get us in the line of fire with our balls hanging out than to dangle Rachel in front of us like that?"

Sam nodded grimly. "We certainly have to treat it as a possible threat."

Ethan exploded in rage. He slammed into Sam, grabbed handfuls of his shirt and got into his face. "That's my wife down there in some shit hole. We aren't talking about some name-less hostage or some political pawn who doesn't matter. This is Rachel. With or without your help, I'm going in to get her."

I don’t think it is any spoiler to say that Rachel is recovered but she has amnesia. She’s addicted to drugs which were used to keep her compliant while imprisoned and her memory is like a sieve. She remembers a few people from her past, like Ethan, but not much else. She doesn’t even recall much about Ethan, just a lot of intense feeling and a foreboding.

There is a lot of emotion in this story and while the suspense is present, I thought the real story was the relationship between Ethan and Rachel. Ethan is desperate for a second chance. Rachel is haunted by fleeting memories and struggling to cope with being with Ethan again. There is tension between them that belies his whispers of love and devotion. They both have to deal with the problems of what caused their marriage to fail the first go around. Ethan, in particular, is in a pickle because no one in his family knew how bad his marriage to Rachel had become.

This book isn’t perfect. One thing that bothered me quite a bit was Ethan’s mother’s adoption of another teenage stray, Rusty. While she played a part in the conflict, Rusty was also a forgotten character for many stretches of narrative. I felt she was sequel bait and little else. At some point, I presume she will hook up with one of the many Kelly brothers.

I liked how the amnesia part was dealt with. Rachel felt confused and guilty and needy, all at the same time:

"Will you take a bath with me?" she blurted.

He blinked in surprise, and for a long moment he didn't say anything. He seemed to struggle with exactly what to say, how to respond.

"You used to wash my hair. I remember you touching me."

Fire built in his eyes, sparking the blue until it resembled a storm front.

"Are you sure, baby? I don't want to do anything to make you uncomfortable."

But I would have liked to have seen more of Rachel’s recovery from her addiction to drugs and whether it had any long lasting effects (it didn’t seem like it did) particularly when I thought that the drug addiction was in place of Rachel being sexually assaulted (which it appears that she was not).   The suspense doesn’t pick up until the second half of the book and while present, my focus was on the rebuilding of the marriage between the amnesiac Rachel and the guilt ridden Ethan.

Also, while I didn’t mind this, I can see some people being frustrated with Rachel because she is weak and often being taken care of by the Kelly men, and the local law enforcement, Sean (who might also be future hero for Rusty) but given that she was a recovering drug addict who had been imprisoned for a year in Cambodia who was also struggling with regaining her memory, I cut her some slack.   Who wouldn’t be a basket case, right?

I was very satisfied, emotionally, by the romance.   Bring on the rest of the Kelly brothers!   B

I have 10 books to giveaway and if you leave a comment and tell us the title of the last good book you’ve read (because I’m nosy like that), I’ll enter you to win one of the 10 copies. Thanks to Berkley and Maya Banks for the giveaway. You can read an excerpt of the book here.

This is a mass market to be released on September 7, 2010 by Berkley, a division of Penguin Books. Penguin engages in Agency pricing.