REVIEW: Getting Him Back by KA Mitchell 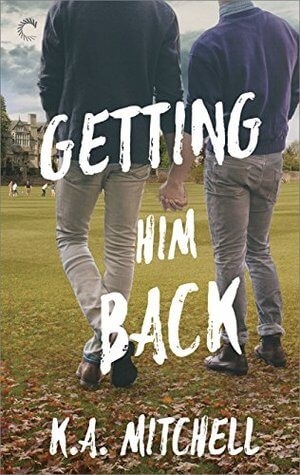 While it’s true that not all of your books have been a complete success for me, you are nevertheless one of my go-to authors and I read everything you release. I like New Adult and when I saw you were releasing an NA romance I was even more eager to read it.

Ethan Monroe is about to start college. His high school boyfriend, Blake St. Pierre, is already at the exclusive Coborn College on a soccer scholarship and despite what makes more sense financially and possibly also academically, Ethan’s plan is to follow him there. In fact, he has pretty much their whole future planned out and he can’t wait to get started.

However, when he arrives, Blake drops a bomb on him.

I went along for a bit, then stopped. “Okay. Tell me.”
He put his hands on my shoulders and looked into my eyes. His green ones were so serious.
God, he was dying. His mom was dying. His dad. Their cat. Because if ever there was a someone-is-dying look, that was it.
“You know I love you.”
I smiled, but I wasn’t feeling it. “Yeah.”
His throat bobbed on a swallow. “But, Ethe, I don’t love you like that anymore.”
Turned out the person who was dying was me.

After a period of moping (understandable), Ethan launches Operation Get Blake Back.  Critical to his plan is to get all the details he can from Blake’s mysterious (and cute) roommate, Wyatt Reese. Ethan can’t help noticing just how hot Wyatt is but that is immaterial to the Plan of course. Except… I don’t think readers need a roadmap to see where this is going.

The story is fairly short – coming in at just over 120 pages. In all the circumstances, I thought Ethan moved on from Blake to Wyatt pretty fast. I was glad he did – while Blake is not awful, I liked Wyatt much better – but I still thought it was quick.

Wyatt is quiet, moody and a bit emo apparently. He wears his black hair (with white streak at the front) in long bangs (in Australia we’d call this a fringe) over one eye and he’s constantly in a hoodie – with the hood pulled up. He’s very closed off. Ethan pretty much can’t resist him.  It turns out that Wyatt has a genetic condition (Waardenburg Syndrome) which results in him having, among other things,  heterochromia (like Olive in Doing No Harm, Wyatt has different coloured eyes. That, and that they are both romances which I enjoyed very much is pretty much all the two books have in common however).  He is also deaf in one ear (which is why I tagged the review with ‘disability’ – as Ethan himself thinks, Wyatt’s genetic condition isn’t a disability – but the deafness is I think.) Wyatt’s genetic condition is a big deal to him and why he hides himself behind his hair and in hoodies but in terms of how Ethan feels about him, it’s neither here nor there. I felt that the story had a good balance between portraying some of the difficulties Wyatt faced growing up and in the present, and showing that their relationship includes many factors and Wyatt’s condition plays only a very small discrete role in how they relate (namely that Ethan needs to whisper in Wyatt’s good ear if he wants to be heard). In other words, what I’m trying to say (perhaps badly) is that it wasn’t a book about disability but rather, a book in which disability appeared. It matters very much to Wyatt and he’s concerned about whether Ethan will be disgusted by his body and his differences, but Ethan just thinks he’s hot. Wyatt quickly realises that it doesn’t make any difference to Ethan – not that it doesn’t matter but that it doesn’t make a difference.

Ethan has to confront some things about himself, the things which led to Blake dumping him, in order to proceed with the Plan and also, as it happens (once the Plan is ditched), in order to win Wyatt. For various reasons, Ethan finds himself thinking more carefully about how he behaves and he definitely had a growth arc over the course of the book. I’m sure he has more to go – and Wyatt too  – and I’m pleased I will be able to revisit these characters again in the as-yet-unnamed next book in the series which will come out some time this year.

I related to Ethan’s struggle with calculus (just draw U’s in the parabola questions Ethan; that’s what I did!) and I liked how both main characters felt lost and alone in many ways and found in each other, someone who would prioritise them. Because relationships are new to Wyatt, Ethan has to be the more mature one and this forces him to grow up a little in ways which were both attractive on him and believable. That’s not to say Wyatt is immature; he’s just inexperienced and navigating new territory. Ethan is fairly sanguine about life (apart from his previous angst over Blake) and he is a good balance for Wyatt.

As I expect from your books (not a complaint), there is quite a bit of sex in the book. It is well written and entertaining in all the ways.  But there is also an extra… sweetness to the tone which fits with the youth of the characters. In some ways, it put me in mind of  some of Heidi Cullinan’s recent books (particularly Carry the Ocean* – which also contains disability and so it may have been that as well or instead of I guess).  (NB – Carry the Ocean is really quite a different book to Getting Him Back – there’s just something about the vibe that I found similar.)

The sex is also a bit more awkward and less practiced than in your adult contemporary romances and again, that fit perfectly with the characters and the setting.

People who say there’s no such thing as a bad blow job have never had one bad enough. Teeth hurt and having someone gag to the point of running to heave is not sexy.

I said above that I thought Ethan got over Blake pretty quickly. I’m going to be contrary here (what’s new?) and say that because the story was novella length, I’d have liked less of Blake and more of Wyatt in it. Ultimately, I think that’s a complaint that the story was too short more than anything. I liked both main characters and I wanted more of them. I felt like I had a reasonable handle on Wyatt even though the story is told solely from Ethan’s (third person, past tense) POV but the story ends when they are really only just beginning.

Still, I liked what I read very much and I’m definitely looking forward to reading more about Wyatt and Ethan.