REVIEW: Get Lucky by Katherine Center 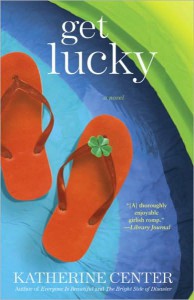 Le sigh…okay I’ll confess that whenever Jane sends me inquiries to review Chick Lit books, or heaven forbid, the actual Chick Lit book itself, I can’t help myself. My fingers itch to at least open the front cover to see if maybe this book will work for me. Sometimes I luck out and sometimes not but in this case, despite a rather lackluster back cover blurb, the Chick Lit goddesses smiled on me.

Sarah Harper’s wonderful fast track career at a big NYC advertising firm is over. Even though she just helmed a major, nationwide ad campaign her “accidentally on purpose” forwarding of an email has brought her a pink slip and a quick trip back home to Houston, Texas. To add insult to injury, J.J., the man who fired her, is someone she had a brief affair with and who got promoted over her and during the long plane ride to Texas, who does she get to sit beside but Everett, the high school boy whose heart she broke years ago. And he said she looks old.

Then once she arrives, her older sister Mackie announces that she and her perfect husband have given up trying to have children. A wonderful, crazy idea takes hold in Sarah’s head and she sees a way to help herself and Mackie too. She’ll be a gestational carrier – a rent-a-womb. It’ll give Mackie what she desperately wants and give Sarah a place to hang out until she decides what to do with her life and career. Getting back in touch with their widower father is a bonus.

But life has some interesting things in store for Sarah including the news that her old boyfriend, Everett, now works for Clive, their father is engaged to a Dolly Parton/Tammy Wynette look alike named Dixie, there’s a part time job in historic preservation with her name on it and she’s due to deliver right smack in the middle of hurricane season. To use a favorite cynical phrase of mine “What could possibly go wrong?”

I’ve read enough Chick Lit books now to know the standard tropes. Sarah loses her job, has to head back home, meets up a former love interest, has other man problems and family problems, has a less than stellar job and takes a lot of the book to find herself. Yet the title of the book says it all. She does get lucky as do many of the other characters. Sarah does do this altruistic thing for her sister, she does end up with a new job she loves, her sister and brother-in-law get the children they’ve craved, her father finds new love with a woman who turns out to be just right and Sarah does end up getting the wonderful guy.

But I like how you throw in some differences from the norm. The story mainly takes place in Houston, which though the 4th largest city in the US, isn’t the first place I’d think to use. And you do make the setting integral to the story from the heat and humidity which an increasingly pregnant Sarah has to deal with to the preservation laws which bring about the situation which gets her a job to the hurricane season which coincides with her due date.

Sarah’s pregnancy is funny to read and obviously written by someone who’s experienced pregnancy in humidity. I am glad that you initially mention all the possible problems, both physical and emotional, that all of them might go through. The temporary hormonal crush on Clive, though slightly icky, seems reasonable. Then you have Sarah experience the feelings of loss from being pregnant then having delivered and the fear of becoming too attached to babies. Anything less than this would have seemed like glossing over the very real pitfalls of the situation. But it’s great that even I – a single by choice woman – enjoyed reading about how pregnancy changes Sarah and what she thinks of it.

Sarah and Mackie have now moved to a new relationship and not only one caused and abetted by Sarah’s surrogacy. Any time someone becomes a mother – they will be sucked into a new reality and persona due to demands of the baby – even if they eventually return a bit to themselves later when baby has grown some. And these two have been so close for so long that any change will be wrenching and must be a shock. I like the touch of reality that everything isn’t perfect in their new relationship and that they need to work things out.

Dixie is delightful if a bit stereotyped. Rhinestone everything and slightly tacky like Dolly but with heart of gold. I love the self defense class she leads and the lessons it teaches for women. But though I thought Sarah deals with the change in her father’s life, Mackie doesn’t seem to. Maybe this is something that will happen later but since Mackie is the one who initially balks at Dixie, I wanted to see her change of heart.

I’m not sure about the April/Veronica subplot. Is it so Sarah gets a chance to be the older sister type? Because it gets Sarah over J.J.? Or it gets Sarah out of the house and away from Mackie when Sarah’s hormones are raging? I never figured this out especially since Sarah’s relationship with J.J. is already over and she’s moved on in her life.

Everett certainly sees Sarah at her worst – when heat and humidity are trashing her during the earlier stages of pregnancy then 8.5 months pregnant with twins, water breaking in the middle of a hurricane. But basically he still loves her from the past – even if he takes a well deserved potshot at her when they first meet. I like that they do discuss past issues before officially getting together and – surprise – he’s not Mr. Perfect, as Sarah enumerates in the last chapter. And a big thank you that Sarah doesn’t turn into a spastic idiot around him.

So, here I am again, a fool for another Chick Lit book. Just call me Pavlov’s dog. I can’t seem to resist the things despite numerous bad books in the past. But, overall, this one is a winner for me. An intelligent heroine who isn’t made to look like a total fool, lots of humor, a suprise twist on her job and a hero who’s a good guy. Thanks. B

→ Jayne
Previous article: REVIEW: Coin Operated by Ginny Glass
Next Post: Thursday Midday Links: Can a “no issues” book truly be no issues?