Your novella, Gaijin, caught me by surprise. A friend recommended it to me on Twitter and then loaned it to me through my Kindle. I had heard about it and investigated purchasing it once before, but shied away from making an actual purchase. Somehow, I wasn’t expecting as much thoughtfulness as I got. 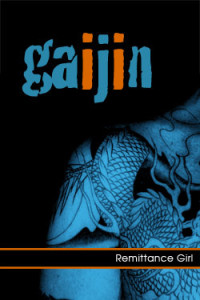 There is not much plot to Gaijin. Instead, there is a situation, and it is a tough situation.

Jennifer awoke to a dull throbbing pain in her chest. She opened her eyes to blackness and felt an immediate flare of panic. She wasn’t at home; this wasn’t her room, her bed. The pain in her breasts, a hot, pulsing, generalized ache, was all that distracted her from the strangeness she had found herself in. Someone, something had tried to hurt her.

Instinctively, she tried to pull her arms up to cradle her chest, but her arms wouldn’t move. They felt frozen and useless, numb, behind her back. Another bright bloom of panic surged up her throat and exploded in her head and, this time, no amount of pain could stop its eruption. Jennifer rolled onto her side and screamed into the darkness.

Jennifer has been in Japan for a year, working at a place called the Blonde Chicks bar. Now she has been kidnapped by a man whom she had refused to serve instead of the table she was booked to work at. Shindo has had Jennifer’s nipples pierced while she was passed out, but he has waited until she is awake to rape her.

I don’t want to spoil exactly what befalls Jennifer and what she does to try to change her situation. Instead, I would rather talk about the novella’s themes. At 57 pages it is pretty short, and it comes to an end quickly, but what I liked about it was that it left me thinking.

At its center were two issues, rape and culture clash. No character was fully sympathetic, not even Jennifer, despite her plight. She has little cultural sensitivity and seems to have been drawn to Japan for its surface beauty and then stung by a bad case of culture shock.

She knew nothing about the Japanese male psyche. A year of flattering them hadn’t given her any insight into what made them tick, really. All she knew was that, at some level, they were all insane; the outrageous lengths they would go to, just to avoid having their pride hurt, their “face.” Face, she didn’t understand it. She only knew that their whole world revolved around it. And how would piercing her nipples and then killing her save anyone’s face?

Here’s what I liked about Gaijin: how in one paragraph you can take me from feeling alienation from Jennifer’s racism, to feeling terrible pity for her and almost understanding her warped point of view.

I wasn’t sure if I was meant to share her perspective or meant to revile it; in a discomifiting way, I was reminded of my first year as a new immigrant in the US, when, at age eleven, I hated the fricking squirrels because they were so alien to me. For me, Jennifer’s hatefulness toward Japanese men was at once horrible and believable and in no way justified Shindo’s treatment of her.

Jennifer isn’t the only ethnocentric character in the story. Shindo and his cohorts throw around the term gaijin a lot, and it feels as though some of them don’t see her humanity or acknowledge her suffering.

Shindo is a mystery, in that we never get his POV and like Jennifer I didn’t quite know what to expect from him. He seems to have some kind of obsession with Jennifer, he rapes her over and over and demands to know why she is cold, yet his demands came across as absurd, since there is far greater coldness in his actions toward her far than in her honesty with him.

There are moments when we glimpse Shindo’s humanity. For example, at one point in the story we learn that Shindo’s father was in one secondary character’s view, far worse than Shindo. In a lesser book, this would be our cue to sympathize with Shindo – to pity him for having possibly been abused. Here, it’s just one more signpost on a road to purgatory. Nothing, not Jennifer’s racism, not Shindo’s crappy childhood, and not the orgasms he inflicts on his victim, serves to justify his actions.

He sat up, straddled her hips, and began to unbutton his shirt. Jennifer turned her head, fixing her gaze on the snow beyond the window. Now it was dark, all she could see was the flurry of white particles, illuminated by the light inside, brushing chaotically against the black pane.

It was hard to drag her gaze away from the window. There was something stupidly Zen and comforting in the fact that she hadn’t done anything to get here. She was a snowflake that had brushed up against a plane of black obsidian.

Gaijin isn’t perfect. There are some copyediting errors and the novella feels abbreviated, more of slice-of-life vignette than a story. Also, at $3.99 for 57 pages, the price seems kind of steep. For me it was worth reading nonetheless, thanks to the discomfort I felt at what happened and the odd comfort provided by the imagery and words. B.

PS Since a spoiler was requested in the comments, I have added one below: