I am constantly amazed at how consistently good these books are.  I don’t mind waiting a year between books if it means that each story is as good as the last one.  “Frost Burned” is the seventh book in the Mercedes Thompson series.  Mercedes is an auto repair mechanic and coyote, a shapeshifter whose only real power is her immunity to magic. She has recently married the alpha of the Tri Cities pack, Adam Hauptman. Their world is changing because the alpha of North America has brought the werewolves out of the supernatural closet. The fae, due to circumstances revealed in Fair Game, have retreated behind a magically protected curtain of sorts. 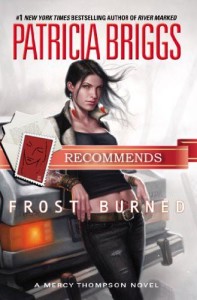 The story is set just after Thanksgiving.  The whole pack had gathered for the holiday meal.  Mercedes and Jesse, her stepdaughter, have taken off to do some Black Friday shopping to buy a popular video game.  Their post holiday gaming plans are interrupted when the entire pack appears to have been kidnapped by some fake federal agents leaving Mercy with Ben.

The kidnappers try to use the pack to force Adam to conduct a public assassination of  U.S. Senator Campbell, a fierce anti-fae, anti werewolf voice.  Adam’s actions would turn the tide against the newly come out werewolves, particularly on the heels of particularly gruesome vigilante justice carried out by the fae recently (see “Fair Game”). Adam is likely specifically targeted because he has become somewhat of a public figurehead for the werewolves. He had served honorably in the military and offered his services as a consultant. Attractive, charismatic, and capable, Adam has served to lessen fears and pave the way for acceptance.

If the anti werewolf contingent can get Adam to be seen as a dangerous animal, the transition of private to public for the werewolves would be much less likely to happen. Instead, they would be hunted, collared, and made outcasts. However, Adam’s first allegiance is to his pack and not the entire body of werewolves. If killing a US Senator frees his pack, Adam will do it even if he doesn’t want to.

Mercy must try to save the pack and Adam and all the werewolves as well as fight a serious battle of power with an ancient power.  If this sounds like a redux of previous Mercy books, it is but it isn’t.  The ancient power is a new evil and one that threatens both pack and vampires.  Through the battle, Mercy learns more about her walker heritage and we learn more about the pack connections.

While Mercy’s bonds with Adam are tighter and more emotionally powerful than ever, Mercy is always her own person and, more importantly, neither is diminished by their marriage or connection. Further, even though they are physically separated for much of the book, their mate and pack bonds means that they are never truly apart. We even get a few scenes from Adam’s point of view. The time spent with Adam actually focuses on his love for Mercy and his fear for her.

Part of this book carries over the theme from Fair Game in that danger to loved ones can create havoc for a stronger entity. Adam fears for Mercy’s fragility as much as he respects her canniness and her willingness to protect their pack. Mercy fears for the humans such as Gabriel, the young man who works with her at the Garage and who is in love with Jesse, and Gabriel’s family.

The pace of the book is fairly robust. Mercy is constantly moving, often hauling endangered and wounded individuals in her wake. I particularly liked the number of dangerous creatures in this book. It fits with my worldview of old, powerful beings. They either crave more power or are insane or both. Sometimes you end up cheering on the least evil person in the melee. I can’t wait for the next installment.

For long time readers, there are rewards in this book for continuing the series. For first time readers, however, I think that there story is unique enough that it can stand alone. The romance between Adam and Mercy was just enough to satisfying this die hard romance lover. Can’t wait for the next book. B