REVIEW: For Me and My Gal by Robbi McCoy

I came to your novel “For Me and My Gal” in a roundabout way. Somehow I was on another website about LGBT books – sorry, I honestly don’t remember which one – and came across a year by year listing of books which had received awards. Happily I began to peruse recent past winners and liked the fact that your book has a historical element coupled with a contemporary setting. I often enjoy WWII settings so off I went to buy a copy.

“Not only has architecture grad Shelby Pratt been fired from her job as a waitress, she’s locked her keys in the car and is infuriated when one of the women that just got her fired stops to offer help.

Gwen Lawford feels bad for the waitress, but it seems there’s little she can do. Director of a small Naval museum on San Francisco Bay, Gwen is working desperately to save the historic building from developers.

When Shelby learns that Gwen tries to get her rehired, she offers her thanks in person—giving her the chance to tour the museum and to meet the intriguing Gwen under better circumstances.

Soon they discover a mutual interest in unraveling a mysterious affair between a Rosie-the-Riveter shipyard worker and a Navy WAVES recruit, opening the door to continued contact…and deeper feelings.

But secrets of the past and present take a shocking personal turn for Shelby, and Gwen’s desire to set the past right could destroy any chance at a future of their own.” 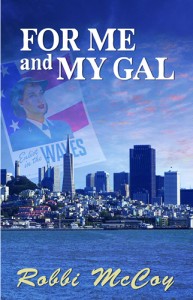 There’s a lot going on in this novel. The past and present private lives of the characters, the contribution of American women to winning the war effort, the struggles of lesbian women during WWII and the present, the preservation of the history of the women who worked the shipyards and who served in the WAVES, the change in public acceptance of lesbians – it sounds like it could be overwhelming and lead to areas being skimped on but I never felt that a plot ball had been dropped. Okay so many of these threads were interwoven thus allowing many things to be explored and settled at the same time but the way everything comes together shows you have a firm grip on what’s going on and can keep the book focused. The ending is a little happy, happy with everyone either totally accepting of the lesbian couples in story or coming around to it. But then after seeing what some of them endured in silence for 60+ years, I can buy into a HEA for them.

The way you integrated the information about WWII, the WAVES and how lesbians were viewed then into the present setting held my attention without it seeming like an info dump. And I hate me a big ol’ huge info dump like almost nothing else. I could tell that you’d probably done a ton of research but limited yourself to including only what is pertinent to the story. The details serve the book without overwhelming it and whetted my appetite to learn more – something I adore in books.

I think the part that struck me the hardest is the all pervasive fear that lesbian women lived with then. Being outed meant lost jobs, dishonorable discharges, being shunned by friends and family and having to deny a basic part of who a person thinks they are. As one character says, it made people live lonely, unhappy lives. It made them exist in the shadows and lack any sort of community of support. I can only imagine how this would shrivel the edges of your soul after a while. It helped me understand why one contemporary character is so unwilling to deal with half truths and prevarications from another. It also adds sauce to the public and proud announcement made late in the book. I can only (admiringly) repeat what another character says. “Damn!”

I’m glad I found that website with the award winners and that I learned of the existence of your book. It was an eye opening, learning experience and interesting to read. I think it has a lot to offer readers who might come to it for diverse reasons. If it tended to a wee whiff of soapbox-ness once in a while, the story made it worth it. B