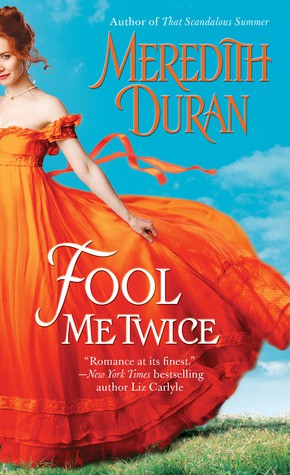 Just the title is probably enough to clue in readers of That Scandalous Summer that this book will be about widower Alistair de Grey, who went spectacularly round the bend over his late wife’s betrayal in that story. And who else would he be paired with but the mysterious, undoubtedly deceitful Olivia Mather. Don’t worry if you haven’t read the first book though, the story can stand alone.

Olivia is up the Victorian equivalent of shit creek, and she’s desperately searching for a paddle. She’s already been left for dead once and though she doesn’t know the why of it, she does know the who – crooked politician Baron Bertram. Sick of running and hiding, Olivia decides to find protection for herself; she applies for a job as a maid to the Duke of Marwick, planning to search for blackmail material. The Duke is known as a kingmaker, “friend to princes, patron of prime ministers, and puppet master of countless MPs,” and as Olivia knows, he also has reason to hate Bertram.

Olivia may have been forced into impersonation, thievery and blackmail, but she’s a punctilious person at heart and she’s shocked at the state of things in the duke’s house. “…if Marwick had once governed the nation, he now failed to govern even his own home. His servants were running wild.” Marwick himself hasn’t left his suite in months. Things are so desperate that the butler gives the obviously well educated applicant a job as temporary housekeeper. And although she’s supposed to be concentrating on her search, Olivia finds herself at the mercy of her worst flaw, a need to “interfere and manage and fix things.” Not just the state of the house and the recalcitrant servants… but the master of the house himself.

Fool Me Twice is surprisingly old skool in tone, not something I expected from a Duran story. (I say in tone, because the action doesn’t actually venture far into bodice-ripper territory.) Alistair’s state of mind is extremely dark, especially when we discover that his agoraphobia is based on the fear that if he goes anywhere near the people who helped his wife betray him, he’ll kill them. His deliberate intimidation of Olivia is genuinely frightening:

He lifted a brow, which gave her a weird shock; it was the first animation she had seen on his frigid countenance. ‘Silence? But a moment ago you had so very much to say.’ He placed his thumb on her lower lip, then made a firm, hard stroke. She tasted the salt on his skin.

This was not happening. She seemed to move outside her body, viewing from above this unbelievable moment: the Duke of Marwick, molesting her.

He withdrew his thumb. Lifted it to his own mouth. Tasting her.

Their eyes met, his impossibly blue, not a speck of hazel or gold to break their electric intensity. A curious prickle spread through her.

He made a contemptuous noise and dropped his hand. ‘Disobedience,’ he said. ‘The taste of it does not suit me.’

She turned her face away. Staring at the wall, she said rapidly, ‘The staff assures me that you have never been the kind of cowardly man who abuses his servants–‘

His fist slammed into the wall.

She opened her mouth. Nothing came out. His fist had missed her ear by inches, no more.

‘I am precisely that kind of man,’ he said bitterly. ‘Or did you imagine you were dreaming this episode?’

The progression of feeling between them is carefully drawn. Olivia is dismayed to find herself sorry for Alistair: “this sudden fleeting sympathy was undeserved by him, and ridiculous of her and… the very opposite of armor.” And through reading his papers, she discovers that he’s highly intelligent and was once an impassioned idealist. Perhaps she’s better able to relate to him because she’s also discovering her own dark side, especially when she realizes that one of the men Alistair yearns to kill is Bertram.

A horrible thought gripped her: if he murdered Bertram, her own life would become so much simpler!

She caught her breath, appalled by herself — and by him, too.
[..]
And suddenly she felt outclassed. It was a startling and unpleasant and very novel experience, but somehow he had done it: he had turned the tables on her, not with brute strength but with his wits. For now, if she encouraged him to leave these rooms, she would be a party to his murderous intentions.

And he had made sure she knew it.

‘I can’t say I support murder,’ she managed. She hoped God took note of this virtue, and marked it to counterbalance her longer lists of sins.

Meanwhile, interacting with another human being is helping Alistair move away from his “violent, broken, shattered, murderous self.” (The self very much like his despised father.) Their relationship becomes a more standard battle of wits, and I started to feel impatient at this point. It had such a cliched feel — feisty woman vs. bear with wounded paw; it’s probably just me, but I even started thinking of the stately Olivia as being small, and apt to pound her tiny fists. (It didn’t help when Alistair told her, “You are baiting the wrong man, little girl.”) Olivia’s genuine fear becomes fear of their mutual attraction, which also pushed my particular “tired of it now” buttons. The story picks up again when Marwick, as he inevitably would, discovers Olivia’s deceit.

The strength of the book is the language around the complex, ever-changing emotions both characters are feeling. Even the more familiar moments are beautifully expressed:

He found himself groping for another script to guide him. But there was nothing now in his brain but his instinct, his rotten instinct, which wanted to smash something. Or tie her up, swaddle her in gauze, lock her away somewhere he could study her until he understood… something.

The sex scenes are particularly vivid and passionate. Yet somehow, I still wasn’t entirely in love with these characters or this relationship. There were just too many echoes for me, despite the beauty of the writing. I feel like I’ve read variants of this conversation a hundred times (and didn’t like it then, either):

‘You could not have hustled me out of that flat more quickly this morning. And now you’re refusing to have a conversation. Are you afraid that you disappointed me? For I assure you, it wouldn’t have been possible. I wasn’t expecting much–‘

He made a choking sound.

‘Oh, dear.’ She reached for her discarded cup of tea, brought an hour ago by the obsequious conductor. ‘Would you like some of this? And don’t misunderstand me; it was quite nice. Last night, I mean.’

Similarly, when Alistair and Olivia thought about their feelings for each other, it never felt quite…there to me, but more like a script I already knew. This kept my grade from going as high as it otherwise might have, considering the quality of the prose, but I’m still recommending Fool Me Twice: I don’t often get the intense reads I adore in such a well constructed form. B

→ Willaful
Previous article: When Online Reviewing Is No Longer Fun
Next Post: Wednesday News: Ebook settlement rebates, a reunited Hindu epic, Lego – from band to movie, and a profile on Leila Aboulela