I’ve never read your other series, but as soon as I heard the pitch for this book, I knew I had to have it. Werewolves on the Titanic? How can I resist?  I’m always on the lookout for an intriguing twist, and this sounded perfect. While this book was enjoyable and the characterization spot-on, I felt that it was still missing some key elements that would move this from ‘good read’ to ‘great read’. 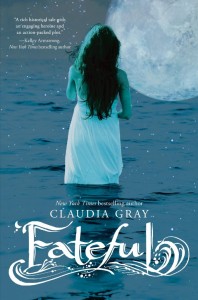 Fateful follows the story of Tess Davies. She’s a maid in the household of a wealthy, unlikable family who is completely and utterly broke. They’re heading to America in search of a wealthy tycoon’s daughter to marry to their titled son, and hopefully replenish the family fortunes. Tess hates being a maid, and is planning on using her arrival in America as a chance to escape servitude. They are, traveling on the Titanic, which will lay a kink in everyone’s plans. While on board, she runs into Alec Marlowe, a mysterious, wealthy and attractive man that she’d also mysteriously ran into the night before.

Alec is a werewolf. Not the sultry “I occasionally grow hair and look at you smolderingly” sort of werewolf, but the kind that must transform every night from dusk until dawn. While he is in werewolf form, he cannot control himself or remember anything, and he is a dangerous menace. Alec is being pursued by The Brotherhood of Wolves who want to bring him in control. If he joins them, they’ll perform a magic rite that will give him control of his beast, imbue him with other godlike abilities (that aren’t really mentioned in the story but hinted at) and will also control his mind. Alec wants nothing to do with the murderous Brotherhood, and is headed to America to escape them. He finds himself trapped on the Titanic with his pursuer, and things escalate from there.

Your research was excellent. I felt like you painted a very detailed picture of life on the Titanic, down to the small, fiddly details of who would have a key where and what meals were served. Tess is serving a first-class family but resides in steerage, and her friend befriends one of the deck officers. All angles of the story were covered, and I appreciated this. As a reader, I felt like you did your research and it enhanced the period feel. Tess’s observant details added a lot without feeling as if they were being forced down the reader’s throat. It’s clear you love your topic.

The story is told from Tess’s point of view – all first person present – so the story is encapsulated based on her experience entirely. Her time on the Titanic is spent caring for the family she serves and sneaking time with Alec, who has a multitude of his own problems. Tess is a straightforward but likable character. She worries about others and cares for them, and makes friends easily on the ship. She has one rather stupid moment, but for the most part, I found myself cheering for her. Alec is a more one-dimensional character, as we only see his reactions through her eyes. In addition, because we as the readers know that there will be a terrible disaster, there’s an undercurrent of tension through the entire book. The author foreshadows it delicately, but the conversations and context lead the reader into a sense of welcome dread. Every time the date ticked over at the start of a chapter, I grew more anxious for the sinking to begin.

However, this is where the story disappoints. For those that buy this expecting Titanic survival porn like the 1997 James Cameron movie will be disappointed. For 80% of the book, this is the story of a serving maid that falls in love with a man being chased by werewolves, and it just happens to take place on an ocean liner. Even though the writing was interesting, I found myself impatient to have the actual disaster happen in the story. When it does happen, it is not drawn out and lengthy, but is only a few chapters. Since this book was billed as “werewolves on the Titanic”, I admit that I was hoping for more. The subsequent rescue and time on the Carpathia is reduced to a few recap pages, and the ending (even with the pleasant twist) was abrupt.

I think this is my biggest issue with this story. There is a distinct lack of emotion through the pages. Though the characters have emotional events happening in their lives, it all feels very clinical and detached. When the hero and heroine declare love to each other, I did not feel it. When the ship was going down, I did not feel Tess’s horror. I did not feel the atmosphere of the story, and by all means, this should have been a deeply emotional, wrenching read. I went in expecting to shed tears. I did not shed a tear. I feel like you could have done more with the storyline, and you chose not to.

Your research is superb, the characters appealing and the topic a winner, and yet I found myself entirely separated from the story. I wish it had been more emotional. I wish there had been a few more chapters about the disaster as it was occurring, and the subsequent rescue of the heroine, and at least one more chapter added to the end so we can see more of Tess’s new life.

Despite the lack of emotion, this book was headed into B+ territory until the too-abrupt ending. Instead, I’m going to pull this back down to a strong B.