“Cath is a Simon Snow fan. Okay, the whole world is a Simon Snow fan, but for Cath, being a fan is her life—and she’s really good at it. She and her twin sister, Wren, ensconced themselves in the Simon Snow series when they were just kids; it’s what got them through their mother leaving.

Reading. Rereading. Hanging out in Simon Snow forums, writing Simon Snow fan fiction, dressing up like the characters for every movie premiere.

Cath’s sister has mostly grown away from fandom, but Cath can’t let go. She doesn’t want to.

Now that they’re going to college, Wren has told Cath she doesn’t want to be roommates. Cath is on her own, completely outside of her comfort zone. She’s got a surly roommate with a charming, always-around boyfriend, a fiction-writing professor who thinks fan fiction is the end of the civilized world, a handsome classmate who only wants to talk about words . . . And she can’t stop worrying about her dad, who’s loving and fragile and has never really been alone.

For Cath, the question is: Can she do this? Can she make it without Wren holding her hand? Is she ready to start living her own life? Writing her own stories? Open her heart to someone?

Or will she just go on living inside somebody else’s fiction?”

Your books have the ability to take me back to certain times in my life. From the weirdness of Y2K, to the social acceptance issues of high school, to the jumble of conflicting emotions that signal the new world of college, I remember it and feel that you’ve captured the essence. I love that you set your books in Nebraska. So often it’s Texas, Idaho, Wyoming and Colorado that get all the Midwestern US state love so “Go Nebraska!” 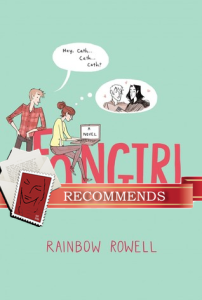 Cath not only has to deal with being a freshman at college, she also has to come to terms with her twin sister’s desire for independence from their twindom. I think you’ve nailed that awkward lurch towards independence that is freshman year. Excitement crossed with a little uncertainty and some bad decisions.

Cath and Co aren’t perfect. When she continues to argue her point about submitting her fanfic story for an original writing assignment with her professor, I wanted to pip up from the back of the office and say, “Don’t keep digging the hole any deeper.” and “No, you can’t submit true fanfic as an original work.” When Levi reminds Cath that she’s lucky her professor is giving her a second chance and Cath still shows a hint of sulk, I wanted to say, “this doesn’t happen in the real world after graduation.” Unfortunately, Wren’s battles with alcohol play out on college campuses each year. But then the sisters are still 18 and learning.

As for the actual reams of Simon Snow fanfic included in the story, it does show that Cath is a good author. Plus she reads it aloud to Levi it does serve as a kind of initial bonding experience between them but I did get tired of it. I wanted more of the real world and less of the “Simon Snow” world – more Cath, Wren, Levi and Cath’s wonderful roommate Reagan and less fanfic.

Is Levi too perfect? Yes, Levi is almost too perfect. He’s the perfect starter boyfriend who might in the future merge into the perfect keeper boyfriend and maybe more. He’s cute in his own receding hairline way, he doesn’t push Cath too far or too fast, he has the patience of Job for Cath’s fumbling foray into dating, he’s supportive of Cath’s fanfic writing and the time she and Wren need to reestablish their relationship. He’s funny, he’s well mannered and an all around decent guy. I love that he is all this but one or two faults beyond occasionally filching Cath’s power bars would have made him a touch more real.

Cath and Wren’s relationship with their father and mother served as the opening basis for the girls’ deepening involvement into the Simon Snow fandom. When their mother left and their father would get into his manic moods, they could control something in their lives by controlling the fanfic. Cath’s writing gets polished and honed from her time in the world – much like that of some now famous authors. She just has to gather her courage and confidence built over her two semesters at UNL and step off the Snow cliff into her own fiction. I doubt that the 1st semester Cath could have done it but after watching her grow and change, I can see that by the end of the book, she’s ready to try her wings.

The ending feels confident for these characters and open ended. Cath and Wren have survived their freshman year, found people they care for and about, the Simon Snow fanfic has been wrapped up, Cath has taken baby steps towards finding her own way in her own fiction and feels secure about her feelings towards her mother. At one point, after he’s started to try and convince Cath to date him, Levi asks her, “Are you rooting for me to win?” Well, I was rooting for all of them. B