I picked up your book on Amazon because I was interested by the cover (which has absolutely *nothing* to do with the actual plot of the book). Dr. Magdalena O’Donnell is grieving. She was driving the car that her 18 year old sister Carly was riding in when she died. Lena is suffering from horrible survivor’s guilt, to the point that she’s completely cut herself off from any possibility of personal relationships, with the exception of her friend Shelley, who won’t take no for an answer and her pediatric patients at the hospital. Lena allows her life to be consumed by work, which is why she’s doesn’t even go to the lobby at the hospital when she’s called and told that she’s received flowers. It’s the anniversary of Carly’s death and she knows they’re from her parents urging her to finally bring herself to visit her sister’s grave. Carly hasn’t been since the funeral — she can’t handle the thought of Carly in the ground. The delivery guy insists that Lena come and sign for the flowers, which results in an incredibly rude interaction between the two. 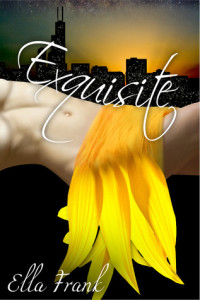 That night, at a work function, Lena discovers that the flower delivery guy is actually Mason Langley, one of Chicago’s most successful restauranteurs and most eligible bachelors (his mother owns the flower shop where Lena’s bouquet came from). Mason is amused to find Lena in his restaurant, Exquisite, and can’t seem to help himself from needling her, even as she attempts to apologize. He is intrigued by Lena’s prickliness and quite sure that his charm and easy going nature will break through. And because this is a romance novel, Mason insists that Lena come back to the restaurant on another night for a date. Lena is hesitant, but very attracted to Mason. The two have several fits and starts, she blows the first date, he misinterprets some things making it hard for the two of them to be together, but he persists, and soon, Lena is lowering her well built walls and letting Mason in.

I read this book directly after reading a romance that I truly hated, which may be why I so enjoyed it and found it be a terrific palate cleanser. I thought that Lena was a bit pricklier than strictly necessary, but Mason is a care giving hero, which is my favorite hero archetype. He’s sweet and thoughtful, and just bull headed not to let Lena shut him out. He’s got a loving family, who embrace Lena with everything they have and help her heal from Carly’s death. But as Mason encounters his own family trauma, he shuts Lena out, and it’s her turn to stand by him and push to keep them together.

This was a long book. Perhaps too long. There was to me a readily apparent “end” point in the story, but the story actually took a left turn, and went for another 15 chapters or so. In the end, the additional “event” worked for me, and in fact I thought deepened the relationship between the two characters, but it’s definitely worth noting. As I said, I found Lena to be prickly, and pretty standoff-ish in the beginning of the book, but it makes her emotional growth as she becomes more involved with Mason quite apparent, which I liked. The length of the book also lends itself to some dandy sexual tension between the characters, including an extremely memorable shower scene that is smokin’ hawt. In fact, while the love scenes are generally not particularly daring, but are extremely well written and very spicy.

The book has a good number of typos and copy editing issues, which may be off-putting to some readers, but overall, I found it to be eminently enjoyable. You are definitely a new author who I’m looking forward to reading more from. I give Exquisite a B.