I’ve had mixed reactions to your work. I enjoyed your first one, Wicked Burn, quite a bit but Daring Time seemed to be more a romance about the city of Chicago than a romance between two characters. Other books like Sweet Restraint and Holiday Bound had complicated emotional connections involving other characters and I wasn’t necessarily convinced at the love connection between the two main protagonists. 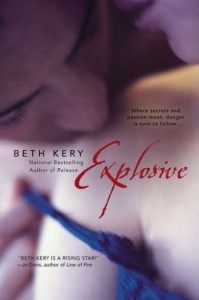 My reaction to Explosive is much more in keeping with my reaction to Wicked Burn. It’s hot and, more importantly for me, focused mainly on the main two protagonists. The story is told in a non linear fashion that initially confused me but once I had read a few chapters in, I wondered if it wasn’t intentionally put together this way to add a layer of empathy for the hero.

Thomas Nicasio and Dr. Sophie Gable work in the same building. Nicasio is an investor and Dr. Gable is medical doctor who both have offices at the tony high rise in downtown Chicago. Thomas’ brother was a patient at Sophie’s clinic and she would see him in the waiting room reading a newspaper or flicking through his blackberry. She would sometimes see him in the building. Sometimes they would exchange glances conveying sexual desire and sometimes flirtatious banter, but they’ve never translated those looks into action. When Thomas’ brother dies unexpectedly and Thomas’ father is under investigation by the FBI for organized criminal activity, the hope Sophie has of any real connection with Thomas dies swiftly.

When Thomas shows up at Sophie’s Lake Haven cabin, she couldn’t have been more surprised. Thomas appears dazed, confused, perhaps suffering from some trauma. But when asked what he is doing, he only replies that he came for her. Thomas has suffered a short term memory loss (Amnesia folks!). His amnesia hasn’t prevented Thomas from remembering how much he wants Sophie and when something happens in Chicago that leads Thomas and Sophie to take refuge in her cabin home, his pent up desire takes on a physical incarnation.

The suspense is provided by not only Thomas’ dangerous past, but also the secrets that Sophie is keeping from Thomas, for fear that by sharing them she’ll trigger some negative amnesiac event. While Thomas and Sophie are enjoying each other’s bodies and getting to know each other’s minds, the underlying tension is when will this all go wrong for them. I’ve always thought it is effective to use the romance genre constraints against the reader in that the reader provides her own tension to the story knowing that no romance is not without it’s ups and downs.

My complaints with this book would be that I wanted to see more of Thomas and Sophie outside the confines of the cabin and in their natural business habitat. I would have liked to have seen more of their pre Lake Haven contact. Thomas and Sophie eye flirted for over two years. I wished that there was some space given over to the development of their feelings prior to their intimacy. I thought that Thomas’ background of being a navy explosives expert was dressing and not well integrated into the storyline. Some of the details were really vague, particularly about Sophie. I wanted to know more about her past, her background.

Sophie held her breath as he opened his long legs and pulled her between them. He leaned down and placed his hot, open mouth on her abdomen. Her chest tightened with emotion and she exhaled raggedly.

"Thomas," she hissed as her fingers delved into his thick hair.

He turned his face, his lips caressing her skin. She saw his ribs expand as he inhaled.

"I can smell you, Sophie, and you're sweet." His voice sounded hushed in the still room.

There are a number of sex scenes between Thomas and Sophie and I was pretty impressed at how none of them seemed repetitive. Thomas views Sophie as one of those girls that never get messy which drives the impulse in him to get as dirty with her as possible because somehow he thinks deep down he can cleanse himself in her. But he’s afraid of hurting her, turning her away with his increasingly kinkier demands.