I am ordinarily not a fan of Christmas stories unlike my partner here, Jayne, who has a well known affinity for these stories and given the proliferation of them in the months preceding the holidays, clearly I am in the minority.   I’m always afraid the holiday spirit will overcome the story and everything will become treacly.   However, I always seem to respond well to your books so despite the baby on the cover and the tree and the ornaments, I rushed to download and read this story. 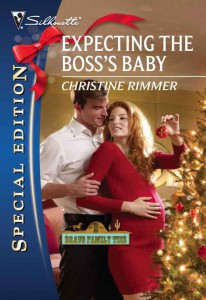 The heroine is the youngest of the Bravo girls.   If we were pigeonholing her, Zoe Bravo would be the free spirit.   Oh, she’s not running around in peasant skirts and beads, but she’s flitted from one position to another, finding nothing that has really engaged her passion and interest in the long term.   She’s easily distracted which is why she has attended two of the best schools in the country, but never graduated.   And it kind of explains what she is doing applying to be Dax Girard’s assistant.

Dax Girard is a “great adventurer and magazine publisher” which, in this day and age, doesn’t seem to be the most credible basis for a rich man, but Dax is very wealthy.   (Maybe he’s modeled after Branson?)   Dax thinks highly of himself and during the interview makes sure that Zoe understands that if she is hired, she cannot have sex with him.   Thankfully, Zoe thinks well enough of herself to laugh at Dax’s serious warning.

He wasn't finished. "And if I were to meet you under other circumstances, I would be only too happy to have sex with you. But I need good staff, above all. So I have a house rule. You work for me, that's all you do with me."

Zoe stifled a burst of inappropriate laugher and sat up straighter in the chair. Somehow, she managed to reply with a straight face, "Seriously, it's not a problem. I've known you for what, two minutes?"

Dax can’t wait for Zoe to fail so he can ask her out, but Zoe is committed this time to seeing this position through.   She wants to prove something to herself and to her family.   Everyone at Zoe’s new office think she’ll succumb to ol’ Dax’s charm in no time so Zoe pretends that she is in love with someone else and thus immune to Dax.   Dax is, well, a rake?   I mean, in one scene he is calculating how long it will take for Zoe to fall in bed with him but in the next he is making out with some chick in his office and setting dinner dates with her.   So monogamy doesn’t appear to be Dax’s strong point, as well as resisting his staff.   Fortunately Zoe has his number:

How old was he anyway, thirty-five or thirty-six? Old enough to stop jumping from one woman's bed to the next. If he didn't watch it, he'd end up ancient and wrinkled, wearing a satin bathrobe, with a blonde young enough to be his granddaughter on his arm.

A subtle humor is imbued in the story because Dax catches on almost immediately that Zoe’s Johnny is fake and Zoe figures out that Dax knows, but she refuses to give up the charade so she keeps on making up fairly believable, yet kind of crazy stories about her and Johnny.

Plausible circumstances leave Dax and Zoe stranded together wherein they don’t have the barriers of the office or Zoe’s fake fiance to keep them apart. Alone and having to rely on each other (or mostly Dax having to rely on Zoe), they succumb to the seeming inevitability of their attraction. It is during this time that Zoe realizes that while everyone has labeled her as flightly and insubstantial, when the chips are down, she is a very capable person. Although it’s a bit trite, Zoe learns her value as a person and I think it was this experience, in part, that makes her able to resist Dax later on in the story after she becomes, um pregnant. (It’s not really a spoiler when it’s on the cover right?).

Dax is a little harder of a nut for me to swallow. He seems kind of consciousless when it comes to women, at least in the beginning. It is true that he has his own emotional baggage that leads him into his certain lifestyle and he certainly makes a big gesture at the end of the book but I wondered if the transition from lover of all to lover of one was too easy. Even though there is passage of time, it’s time spent mostly in Zoe’s head and not Dax’s. However, this is a minor complaint and even the Christmas part was well woven throughout the conflict. B