I’m not sure where I received the recommendation for your book but I do remember I picked it up because it was free. Ordinarily the premise – male prostitute – wouldn’t appeal to me but from the opening scene I was hooked. The heroine, Lori Addison, is a virgin and she’s having a difficult time offloading it. Her virginity came about almost by happenstance because she was in love with her best friend who had never felt the same way about her.  The story is told all from Lori’s point of view but in third person.  One thing readers might have to set aside is believability.  Lori’s independently wealthy due to writing a handful of romance books that were bestsellers. 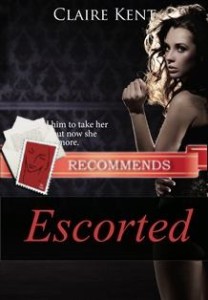 As she grew older and realized that her best friend wasn’t the man for her, she became more and more anxious about her lack of sexual experience. As a bestselling romance author, Lori decides it is time to get rid of her virginity and through referral obtains the name of Ander Lourdes, a high end, very sexy escort.

The way in which Lori goes into this, slightly smirking, slightly embarrassed read as very authentic as were Ander’s very professional replies. Ander treats his escort business as a business and his number one concern is customer satisfaction. Lori’s embarrassed and snarky probes are met with serious response.

Ander cleared his throat, bringing her attention back to him. “Perhaps you can give me a little information about your goals for this engagement.”

She nodded. “Right. Well, I sure as hell wouldn’t pay this much money for a date.” She took a breath. Summoned all her fortitude and courage. “I want to have sex.”

“Yes, but what are your goals for the sex? Are you looking for a particular mood or brand of excitement? Do you just want to relieve tension? Get something you can’t get from other partners? I’m not trying to pry into your personal motivations, but I need a little direction if we’re to make this a successful engagement.”

Lori makes it clear early on that she wants to just have sex, not a pretend romantic encounter and the two begin with that understanding. But Lori is a very curious woman (which made perfect sense given that she was a writer) so she is always asking questions, asking things of Ander that no one had ever asked before. Sometimes she cracks jokes in the middle of their sessions. She’s quite thoughtful toward Ander, as well, embarrassed the first time that he’s aroused but doesn’t finish and offering the last part of her time with him for him to shower and get comfortable.

In all, it is clear that Lori is something different than Ander has ever encountered before even though we only see Ander through Lori’s eyes.

“In that case, it might be a good idea to start with oral. There’s a better chance of your reaching climax that way.”

Despite the bizarre situation, Lori couldn’t help but give a little snort. “And I suppose that doesn’t have anything to do with the fact that that service is more expensive than intercourse?”

This time, there was no mistaking the slight twitch of his lips. His eyes glinted briefly with amusement. “Just a suggestion.”

“Why is it more expensive?” she blurted out, her curiosity once more taking over.

“It’s more intimate,” he murmured, for the first time glancing away. “On my part.”

As the two spend more time together, each visit requiring payment from Lori, they begin to change their behaviors toward one another. Lori, in an attempt to distance herself from Anders and the feelings she has that are developing for him, even tries to date another author.  She also runs into Anders with another client.  Both episodes serve as a catalyst for Lori’s emotional attachment to Ander.

What I found rather amazing was how clinical some of the sex scenes were as Ander and Lori discussed what would give her the most pleasure; yet how very sexy they were. The sex scenes progressed as their relationship did, from awkward and business like to much more romantic.

The biggest drawback of this book are the repetitive writing tics. Lori and Ander have physical responses that are repeated throughout the book and could be distracting. Even some of the sex scenes had repetitive behaviors and motions.  Other than that, however, I thought this was a really well done book that combined all sorts of sexy scenes with emotional drama.  It was funny, sexy, and sweet.  The ending was a little too Disney-ish but not so over the top that I thought to myself, okay, that’s fine. It’s a book I recommend even though it is no longer free. B

PS, Lori’s penname is Claire Kent and that actually bothered me more than the writing tics. Fortunately it is only mentioned a few times.

→ Jane
Previous article: First Page: The Risen God
Next Post: Daily Deals: From the 1920s to a post apocalyptic future and a timetravel spanning centuries