REVIEW: Emily and the Notorious Prince by India Grey 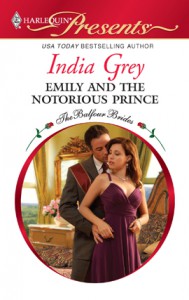 For some reason none of the Balfour stories (even from my favorite Michelle Reid) have really moved me but this was the exception. Emily Balfour walked away from her family and all her wealth when, just as her mother lay dying, Emily learned her father had cheated on her mother. She left after the funeral with nothing but the clothes on her back. Emily had this idealized version of what her life would be like – she would get a position as a principal dancer at a ballet company and she would live on her own in some sunny flat. Except when she auditioned, she had no life to her dancing and she ultimately ended up having to take a job waiting tables at a gentleman’s club. In her spare time, though, she volunteered at a local community center teaching underprivileged girls the beauty of ballet. It is at this community center that playboy Luis Cordoba finds her. Luis is trying to remake his playboy image into that of a conscientious and concerned ruler now that his brother and heir to the throne has died. His people don’t approve of him and don’t believe he is responsible enough to sit on the throne of their country.

So what would be more perfect for Luis than to appear in his country with some demure maiden from a rich English family?   I liked that Luis wasn’t so hip on Emily at first. He liked the wild women and Emily seemed as far from wild as orchids are from daisies. (Orchids being not wild in my gardening vocabulary and daisies being the flower that won’t die no matter how many times you stick a shovel into the plant and try to dig it out so maybe daisies is the wrong flower here but you get the idea right?). Luis recognized that he wasn’t ruling material and he never wanted to be. He doesn’t like the idea of living some kind of masquerade and he doesn’t like being seen for what he is – a useless asshole who likes nothing more than to live the good life free of responsibility with a number of willing women.

I think what I liked about it was that Luis was an asshole but I don’t think he necessarily wanted to be one. He just suffered from a case of massive insecurity when compared to his older brother and fell naturally into the feckless second son. Climbing out of his past lifestyle and remaking himself into something worthwhile took effort. But there were times that I thought Luis brooded a bit too much about his horrible wealthy life and all of his responsibilities. I did want to tell him to suck it up from time to time. But every time I became frustrated with Luis, he would say something totally disarming:

"Christo, I have to,' he ground out through gritted teeth. "Otherwise I won't be able to. In a few minutes the sky up there is going to be swarming with helicopters looking for us, and I wouldn't like to corrupt the innocence of the security team by letting them see me making love to you on the forest floor.'

Emily takes up a lot less screen time. I liked her but mostly I saw her through Luis’ eyes so she served more as a foil for Luis than her own character. At about three quarters into the story, we really get to see some emotion from her, emotion that serves as a catalyst for her and Luis, and we see her engage in dance once more. But it is really Luis’ story and how he comes to grips with being a ruler when he seen all of his life that duty is before love; his father never a father, but only a King and his mother, too emotionally frail to be someone who had to live a lie everyday.   Luis doesn’t know how to be a ruler or at least the ruler his father was and his brother would have been.

"I want my duty to be to you and our children before anything else,' he said angrily. "I want my image to be of a man who, above all, is desperately, ridiculously in love with his beautiful wife.