“Holding Eleanor’s hand was like holding a butterfly. Or a heartbeat. Like holding something complete, and completely alive.”

In 2011, your book, “Attachments,” was one of my surprise delights and, like any book lover, when I find an author whose book moved me this much I immediately head to online stores (used to be a nearby UBS) to see what else they’ve written. I was deflated when I realized that there wasn’t any other book I could immediately buy. Further deflation followed when I realized that your next book wouldn’t even be released in the US for a while. I was feeling like a flat tire. So I settled down to wait. And wait. And finally saw that it was due out in February. Luckily for me it showed up at Netgalley and I settled in to see what you’d write next. Well, “Attachments” was different and this one is too. It’s both an easy and a hard book to read. Easy because of your wonderful writing style and ability to evoke 1986 – yeah, I was there and remember it – and hard because teenagers can be awful little shits to each other even without factoring in the terrible home life you’ve laid on Eleanor. 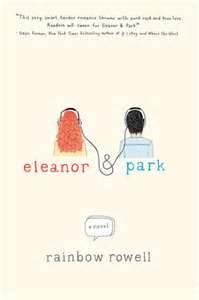 Years ago, a bookclub I was in read “One on One” by Tabitha King. As I read “Eleanor and Park,” I couldn’t help but compare the two in many ways. Both are YA books with the two protagonists in high school (ages 15 and 16 in “Eleanor and Park”) who, despite their initial feelings about each other, form a bond that takes them through the best and the worst. Both books moved me and both already have and are probably going to still further make me examine myself a bit closer and try to be a bit more understanding of people who don’t immediately fit in. In each book, the heroine is the misfit on the outside and the hero is the one who, reluctantly at first, takes her on. Basketball forms the bond in the King book while music and comics forge the bridge for Eleanor and Park. The characters are all from working class families and there is something awful going on in the heroine’s family household. And once I got started with them, I couldn’t stop reading either one of them.

Eleanor is the New Kid. The one who has to find her way in a new school, among new people who have already marked their territory and it doesn’t help that she isn’t “standard pretty” and dresses even more strangely. She’s got bright red, curly hair, is chunky and wears bizarre clothes. From the moment he sees her, Park realizes that the cocky kids will eat her alive if she lets them. So he lets her sit beside him on the bus to school even though this could endanger his own rocky standing as a half Asian kid in a working class neighborhood of Omaha, NE. But he has his family’s generations of living in the area to fall back on so, to avoid watching her be verbally torn apart by the sharks, he reluctantly acts the hero. Eleanor has her reasons for why she acts and dresses as she does. Her home life is terrible and she often has to wear old clothes from Goodwill that require patches to cover the holes. The more flamboyant parts of her wardrobe serve almost to draw attention away from her and towards them. She and her younger siblings have good reason to avoid attracting personal attention because of the man their mother has hitched up with. Drunken trailer park trash would be insulted for this man to be compared to them. Ritchie is the type who enjoys ruining things for others and the way he sometimes looks at Eleanor makes her even more determined to keep from being alone with him.

Park is half Korean. His parents met in Seoul while his military father was stationed there. Even after 16 years of marriage and the probable culture shock that his mother had from moving away from everything she knew and having to make a new life for herself in America, they’re still in love – which serves as a bedrock for Park. Their house is nice, there’s always food on the table and Park has no idea how Eleanor envies this normality and fears her stepfather finding out about her relationship with Park. Their friendship begins as Park notices Eleanor surreptitiously reading his comic books during the ride to and from school. Proffered cassette tapes that he mixes for her seal their attraction.

“He tried again to remember what he’d thought the first time he saw her. He tried to remember how this had happened – how she went from someone he’d never met to the only one who mattered.”

How the story moves from the beginning of that quote until the end held my attention – although it’s not an easy read. The joy and wonder of teenage love is cut with the awkwardness and fumbling that goes along with it. The vicious cruelty and bullying teens can show at the least sign of not fitting in is hard to read about while the cautious friendships forged by these outsiders serve as a balm to that ugliness. Park’s struggle to find common ground with his father contrasts to Eleanor’s determined efforts to blend into the background and fly below the radar of her stepfather’s notice. Watching the emotional damage being done to Eleanor’s younger siblings is heartbreaking yet it makes her final desperate choice to save herself all the more understandable.

The book doesn’t offer a neat and tidy ending. Eleanor has broken free but at what cost? Are her siblings in a better place? We don’t know, though the situation hints at it. Will Eleanor flourish in her new environment? This is also unknown though physically she’s certainly better off. And what of the romance between two teenagers who might have found their someone even at this young age? This is probably the most difficult aspect of the how the book is wrapped up for me. At first, I felt uncertain and slightly cheated. I read through this wrenching story for this? Then it began to dawn on me that if the book had ended earlier – it would have been a HFN. It took Eleanor that long to heal her emotional bruises and come to terms with her new life. That long for her to be sure that Park wasn’t going to abandon their love. I think the way is cleared for a future for them and that their chance at it is a good one. It might not satisfy everyone who reads it but it certainly has made me think while I’ve written this review. B