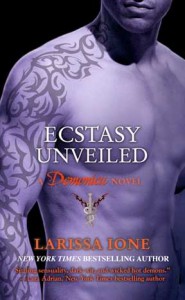 Ecstasy Unveiled is the fourth book in the Demonica series.   I’ve enjoyed all of the three previous books to varying degrees. The last one was my favorite and while I enjoyed this entry Wraith and Serena from Passion Unleashed remains my favorite couple.   The action in this book is non stop and I never once wished I was doing anything but reading the book while the story lasted.

Loren is a  half human, half Seminus demon and half brother to Eidolon, Shade and Wraith. Because he’s half, he’s never suffered from the inability to complete without his mate; unfortunately, Loren remains very inexperienced because he has another sexually related problem.   The touch of his right hand or arm can kill and he’s especially dangerous when he lacks control over his body and emotions such as during climatic sexual moments.   Loren’s had a lot of self pleasure but little enjoyment with the opposite sex.   Oh, Loren, inexperience never looked so sexy.

Idess is a Memitim, the only class of angels born, not made. She is awaiting her ascension.   While Idess is on earth she serves as a protector for Primoris.   Primoris are humans or other beings who have the ability to change the outcome of humanity. Idess is impervious to most   to most dangerous and receives brief infusions of power by drinking the blood necessary to flash from one location to another. Idess feels her time to ascend is near because she has only two Primoris.

One of Idess’ Primori’s is Kynan, a Marked Sentinel, and he was virtually impervious to all threats except those of angelic origin.   Except for Lore.   Lore brought Kynan back from the dead and therefore has the power to remove the gift of life.

Lore and his sister, Sin, are assassins in the service of assassin master, Deth. Lore abandoned Sin when they were younger because he was driven slightly mad when his demon side appeared when he was twenty. Sin got herself enslaved to Deth 30 years ago and so to save her, Lore agreed to serve as well. He had to perform a 100 kills and they would both be free.

His 100th kill assignment is Kynan.    It Lore fails, Deth will cut off Sin’s arms and sell her to a different slave trader. So while Lore really doesn’t want to kill Kynan because it would mean the wrath of his brothers, he wants to save his sister.

If Idess can’t save Kynan from Lore then she will be forced to remain longer on earth. Then Lore becomes one of her Primori’s. So she has to protect Lore, prevent him from killing Kynan. Every one is going crazy at the hospital.   The brothers are fighting. Shade wants to kill Lore. Sin has unleased a disease on the wargs. It’s really all going to hell in a handbasket.   Oh and did I mention that Idess has to remain chaste in order to Ascend.

I kept wondering how you are going to get yourself out of the fixes that you had your characters in and for the most part I thought that the world building was extremely consistent there were a couple questions I had such as how a Memitim knows when the Primori has served his purpose.   I think the world building is creative. The plot moved quickly without being too frenetic.

The wind down of the story was a tiny bit problematic.   All of the resolution to the issues that you threw at your characters were resolved easily.   I also felt that the sexual content in this book as compared to the previous ones was a little toned down. There was a lot of build up but the  consummation  scenes seemed rushed, as if you were laboring to fit everything into the book at the end.   There were so many characters from previous books that are someone entering the series at this point might be very confused.

This is more of an action romance than one that is built upon the character introspection. Lore and Idess spend little time contemplating either their place in the world or their roles in each other’s lives. Nearly all of the conflict comes externally and once those barriers are removed, the two move on toward the cementing of the relationship.   This isn’t a complaint, but an observation. This book is fast paced and fun. I fully enjoyed the book and look forward to more Demonica stories.   B