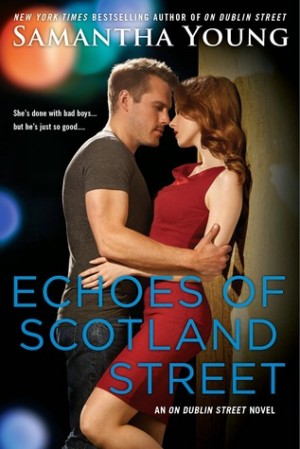 Shannon MacLeod is on the run. She’s fled Glasgow, her home town, to escape her last boyfriend, who beat her to a pulp. She’s come to Edinburgh  to start her life over. First order of business, find a job. She reluctantly goes to INKarnate, an award winning shop in town known for boasting the best tattoo artists. She’s reluctant because she’s a bit of a bad boy magnet, always attracting men who are bad for her, many of whom have abused the trust she puts into them. She knows the chances are high that she’ll meet someone unsuitable. But she tells herself that she’ll just be on her own, finally free to do as she pleases, including honing her skills as an artist, which she’s kept secret since her ex-boyfriend mocked her skills.

She gets the job at the shop, and soon meets Cole Walker, the shop’s manager and lead artist. Fans of the series know Cole. He’s the younger brother of Johanna from Down London Road, book 2 in the series. We first met Cole as a talented child who loved art and wanted to be a tattoo artist when he grew up. Sure enough, Cole is not only a tattoo artist, but a highly sought after one at that. He’s also gorgeous, and a genuinely kind person. Shannon is immediately wary of Cole. He recognizes her immediately, knowing that they met briefly when they were teenagers, but Shannon pretends not to remember, thoroughly intimidated by this obvious bad boy. Cole begins to flirt with Shannon, attracted to her “wee fairy” looks. But Shannon shuts him down in the harshest way possible.

Shannon is dealing with her own issues. On top of having been beaten and nearly raped by her ex-boyfriend, when she left him, she ran straight to her brother, Logan. Logan took it upon himself to beat the boyfriend so badly he was hospitalized. This landed Logan in jail and lead her family to blame her utterly for his imprisonment. Shannon knows they’re right. Her continued bad decisions about men have brought nothing but heartache to her, but now they’re affecting her family too. She’s completely resolved not to get involved with anyone.

But she’s deeply attracted to Cole. She knows that he’d be bad for her, but being around him all the time is torture. Needless to say, Cole is pissed and offended that Shannon made assumptions about the kind of person he is and their cold war is uncomfortable for everyone. Soon Shannon learns that she’s drastically misjudged Cole. Cole is not only universally known as a genuinely good guy, he’s got a wonderful family that loves him and a ton of friends. He’s on good terms with the women he’s been involved with in the past. It turns out Shannon has misjudged him. She apologizes, and Cole decides that they can be friends. But their attraction is still smoldering and one night they end up acting on it. Cole, of course, wants a relationship, but Shannon is afraid. She’s not sure she can trust anyone ever again, and she’s even more afraid that she’ll hurt Cole making him hate her. Cole assures her he realizes the risk, and is willing to take it, but when Shannon’s family insists that Cole is bad for her and she make a choice between them or him, what will she do?

I quite enjoyed this book, which is probably not a surprise to anyone. Cole is a classic Caregiving Alpha, wanting nothing more than to love and adore Shannon. He’s hot, amazing in bed, talented, sweet and generous. What’s not to like? Sadly, Shannon has a harder time than I would have liked learning to trust him. She’s got a ton of baggage and seems to be determined to make Cole carry it, despite the fact that he’s nothing but patient and loving to her. Because this is a New Adult book, I’m generally willing to allow for a level of immaturity from the characters, but Shannon pushing Cole away repeatedly was a bit tiresome. In the end, she messes up big, and at the urging of her brother gives a most excellent grovel, which was refreshing, as I felt strongly that it was her who needed to be worthy of him. Overall though, I felt like this couple was well matched and enjoyable to read. I always love revisiting past characters, and given that Cole and Hannah (the last book’s heroine) are a bit younger than the first group of characters, it’s really fun to see older characters with families now. Your sex scenes continue to be extremely hot and inventive, which I appreciate. In the end, I believed wholeheartedly in Cole and Shannon’s Happily Ever After and was glad to see the series get on back track after what I felt was a miss with Fall from India Place. Echoes of Scotland Street gets a happy recommendation from me. Final grade: B.