You have your share of fans here at Dear Author. Sunita loves your medical romances. Sarah Wendell talked this book up in our podcast so I had to give it a try. Thank goodness this book lived up to its billing else I might not be allowed into the podcast again. 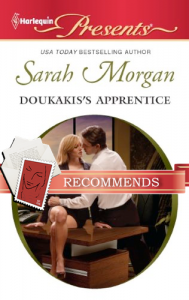 Polly Prince is a marketing genius.  She never attended college but she found a home in a father’s marketing firm, Prince Advertising.  Unfortunately her father picked the wrong woman to marry for the upteenth time.  At twenty-four, Damon Doukakis sister’ Arianna is half again as old as  the senior Mr. Prince and Damon believes that this relationship is all wrong. He engineers a take over of the Prince Advertising and is determined to gain Polly’s support in cratering the relationship.  He intimates that he’ll divest the Prince company of all of its assets and throw out the rest like yesterday’s garbage.  There is only one asset at Prince and that is the genius behind the ad campaigns that the Prince firm has won, some even over Damon’s own media corporation.

Damon takes one look at Polly with her loud stockings, her crazy hair, and her perpetual tardiness and pegs her for just another brainless socialite.

In the midst of discovering that the past still had the power to destabilise him, Damon found his attention snagged by the wisp of pale blonde hair that had floated down from the haphazard, kooky hairstyle she wore. It seemed that even her hair was rebellious.

This girl, he mused, knew nothing about obligation and responsibility.

She selfishly pursued her own agenda with no thought to the casualties. Ten years before it had been his sister who had suffered.

Polly and his sister Arianna had been in boarding school together and it ended badly leading Damon to believe that Polly was a promiscuous and empty headed chit.  Polly knows that Damon has disapproved of her and while she still likes Arianna, she isn’t happy about her father and Arianna marrying either.  Polly’s dad has always abdicated responsibility toward Polly, leaving her to fend for herself.  She found a family at the Prince firm, and a calling.  Damon’s taking it over and plan to break it up is making her sad and angry.  She’s determined to fight for the employees in her firm and that means closing the deal with a major French firm for their new line of hosiery.

Damon and Polly are, if I can borrow a British idiom, as different as chalk and cheese. (I know this term as Helen Brooks uses it quite often in her HPs.)  Polly believes in freedom of expression, loose hours, and personal connections.  It’s how she has managed to stay positive despite being the victim of benign neglect by her notorious playboy father.   Damon lives a rigidly controlled life. It’s how he’s managed to succeed when his parents died and left him without any money and a very young sister to raise.

Polly allows her employees to bring in their kids or work half days if necessary.  Some of the older employees aren’t as productive and the younger ones pick up the slack. They have an office fish, an office plant, and photos of their loved ones at every desk.  Damon runs a “hot desk” system:

‘We operate a hot desk system.’

Her mind preoccupied, Polly suddenly had an image of everyone burning themselves when they sat down to work. ‘Hot desk?’

‘Employees don’t have their own fixed office space. They come in and sit at whichever work station is free. Office space is our most expensive asset and most offices only use fifty percent of their capacity at any one time. We lease the lower ten floors of this building. It’s a highly profitable way of maximising the space.’

While Damon can be incredibly cruel at times, Polly is no shrinking violet.  If she can withstand the buffeting in the book, then I can too as the reader.

‘You’re obviously not enjoying having us as part of your business,’ she said sweetly. ‘Next time perhaps you should check out your prey before you swallow it. We’re obviously giving you indigestion.’

‘Gosh, no. Not masculinity.’ Her fingers flew over the keys swiftly. ‘Just dominant controlling tendencies that prevent you from ever thinking another person with a different approach could be saying something worth hearing.’

Damon’s jaw ached from clenching his teeth. ‘I am always very receptive to fresh ideas.’

‘Providing they’re coming from someone dressed in a dark suit. Be honest—you took one look at me and dismissed me on the basis of my dress and my pink tights.’

‘It is true. And once we’re in the restaurant the first thing you’ll discuss is the success of each other’s businesses, your various achievements and how many financial goals you’ve scored. He’ll acknowledge you as King of the Jungle, you’ll order an eye-wateringly expensive bottle of wine to prove your impeccable taste and his importance as a client, and once we’ve got all that alpha male posturing out of the way I can have my turn.’

If Polly is a bit too positive and Damon a bit too dour,  it serves only to highlight how much the two need each other.  Polly needs someone who will care for her, fight for her above all else.  While she is angered at the dismissive attitude of Damon’s and his ham fisted way of obtaining revenge, she also appreciates the love for Arianna that motivates him.  Her father has never put Polly first.  Damon needs someone to place a little color in his sterile life and he needs someone to be able to accept his devotion.  Together, these two mesh perfectly.  B

→ Jane
Previous article: REVIEW: Cold Fire by Kate Elliott
Next Post: REVIEW: Waking Up with the Duke by Lorraine Heath