There’s been a lot of buzz about your debut novel. My interest was piqued when I heard the premise — a future where people are sorted into factions based on personal ideology — but could it live up to the hype? After all, it’s a dystopian YA and there are a lot of dystopian YA novels coming out, each one purported to be bigger than the last. Still, I tried to keep my expectations low to avoid disappointment but after finishing Divergent, I realized that might have been unnecessary. 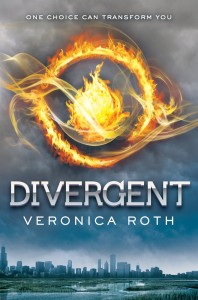 Beatrice Prior is a member of Abnegation, but she’s never quite felt the selflessness that all members of Abnegation should have. But it is her sixteenth birthday, which means it’s time to take the test that guides which faction a person should choose. Many people remain in the factions they grew up in, but many others defect. Beatrice is torn. She doesn’t feel a strong attraction to another faction, but the boundaries of Abnegation chafe.

Then Beatrice takes her test and the unthinkable happens: it’s inconclusive. Instead of leaning strongly towards one faction, Beatrice displays traits that could place her in Abnegation, Dauntless, or Erudite equally. People who display an affinity for multiple factions have a label of their own: Divergent, and they’re very much forbidden. The test proctor erases Beatrice’s test results and records them as Abnegation, telling Beatrice that she must never tell anyone the real results because it would not end well for her.

Now Beatrice must choose which faction she will belong to for the rest of her life. Erudite is immediately dismissed. That faction is Abnegation’s fiercest political rival because they crave government control. The Erudite feel that Abnegation’s selflessness and lack of worldly concern actually hurts society and that they could do a better job. But even tossing aside Erudite, Beatrice has to choose between Abnegation and Dauntless — between the familiar and the unknown. She’s not sure she has the traits to be a proper Dauntless and while Abnegation doesn’t quite fit her, she knows what would be expected of her there. She can work to be selfless for the rest of her life, even though she knows it’d be a lie. But when push comes to shove, Beatrice defects from Abnegation and chooses Dauntless, an act that will change her life forever.

Like most recent dystopians, the concept of the society in Divergent is one that you must accept at face value. If you don’t accept it, for all its oversimplified structuring and erasure of nuance, then reading this book will no doubt be a trial. Despite the premise, however, I wasn’t entirely sure what to expect. Would it be mostly introspective like Delirium? Would it be action-packed like Hunger Games? I couldn’t tell from the opening chapters and to be honest, it could go either way. In the end, Divergent turned out to be a combination of both.

Beatrice takes a new name (Tris) when she joins Dauntless, simultaneously casting off her old identity while also holding onto her past. Tris’s thoughts of and towards her family were something I really appreciated. I sympathized with her struggle to live up to her family’s expectations while also staying true to herself. I think that’s something many teenagers would identify with, and Tris’s thoughts about her family read very authentic to me. Her brother also ended up defecting and because Tris held him up as the perfect example of Abnegation’s next generation, she questions whether she ever really knew him at all. And because both she and her brother defected, Tris wonders what her parents are doing, what they think, and how are they coping with a house empty of their children. I’ve previously mentioned my weariness of absentee or dead parents so it always sticks out in my mind when parents are not only present but have a strong presence in their lives.

I also really liked the romantic subplot between Tris and Four. (I know the name’s silly without given an explanation but in all fairness, I think the name was given to him, not chosen by him.) This is actually rare. Usually, I’m dissatisfied by the romantic subplots in dystopian YAs but I liked the way it unfolded here. The connection between Tris and Four’s past wasn’t much of a revelation and something I predicted the instant he stepped on page, but maybe other readers will find it surprising. The problem with reading so many dystopians in such a short amount of time is that you start recognizing patterns fairly quickly.

I enjoyed the series of tasks Tris and her fellow aspiring initiates had to complete in their quest to become full Dauntless. Mostly because they showed different aspects of Tris’s relationships with her newfound peers and how those relationships evolved as she came into her own. While the obligatory rival doesn’t offer anything new, the friendships that form and break do.

One thing I wished we could have seen more of was the political maneuvering between the different factions. I love that sort of thing and the hints we got in Divergent were a tease. That said, I realize political intrigue is not everyone’s cup of tea. I did think the overall antagonist was very predictable and two-dimensional. I hope we’ll get more nuance in the succeeding novels as we see more of the other factions of Candor and Amity.

While not as action-packed as the dystopian that kickstarted it all (aka Hunger Games), I thought Divergent was a nice balance of action and introspection, which I haven’t really seen yet this year in the books coming out. After the ending, I’m very curious to see where Tris goes from here and I hope wherever she goes, it’ll be full of adventures in a changed society. B