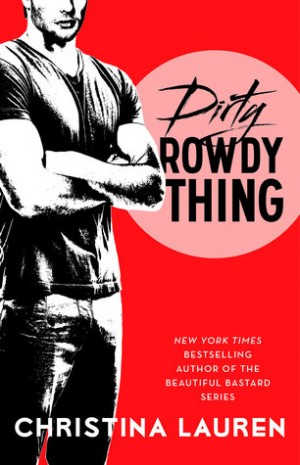 Harlow and Finn met and married in Las Vegas. They enjoyed some headboard banging sex and separated– all in a period of about three days. Following their Vegas outing, Harlow shows up in Vancouver Island where Finn lives for a weekend of sexual pleasure.

Stolen moments are all that comprise their relationship.  Where that would be the case if  Harlow and Finn’s best friends aren’t about to get married.  Then drives down to San Diego seeking a solution to his family’s failing fishing business.  In Harlow he finds a welcome distraction.

In Harlow’s sunkissed life, clouds have fallen. Her adored mother, an actress of some repute, has breast cancer.  Finn showing up with his hard body and crotchety attitude is serendipitous.  Together they seek to ignore everything in their life that is falling apart through each other’s bodies.

The book is sex heavy this is because of how the characters communicate. Inside the bedroom they too are willing to be vulnerable.  Finn reveals his kinkier side wherein he likes to tie women up and Harlow allows herself to be bound. Within the bedroom the two take chances. Harlow gives up control and Finn allows Harlow a peak inside his soft gooey center.

When they aren’t having sex, though, their dual need for control clashes. Harlow wants to help Finn and Finn refuses to accept it. Harlow doesn’t share what’s going on within her family unit perhaps in part because denial helps her to cope, but also because she wants to focus on the things she can fix. She can’t fix her mother’s cancer or her father’s grief.

Plus Finn initially looks down on Harlow’s seemingly indolent life with disdain. She appears to do nothing more than fetch coffee and socialize. Harlow admires Finn but she doesn’t appreciate his judge-y attitude. (Who would?)

The one discordant note in this otherwise charming story really is Finn. Because he’s a male character, his general surly assholishness will be excused but time and again, he’s wrong in his judgments about Harlow.  At a pivotal moment, his overweaning male ego refuses to see the gift she’s given him and instead sees it as an attack on his manhood–and I get it. It works with his “I’m a fisherman and I provide the food through the hard labor of my body” lifestyle, but I think he needed to grovel a bit more. He even harshly judges Harlow for doing exactly the same thing that he had done to her in the past. Finn’s a bit of a dick for all of his magical skills in the bedroom.

Harlow worked hard to accommodate Finn’s needs in her life and the lengths she was willing to go to pursue her own happiness (which so nicely coincided with Finn’s) was often met with disdain and curtness from Finn.

Ultimately I would have liked to have seen a more serious and heartfelt emotional turn for Finn that didn’t have him mouthing a few platitudes and then banging Harlow. She deserved more. Still, this is a smoking hot story with very likeable leads–even with the surly Finn.

Two things I particularly appreciated about the book was the modern tone of it. It felt of the moment and Harlow and Finn came off as youthful without being immature. The second thing is that the sex scenes were interesting and I didn’t feel the urge to skip them as I do with many love scenes. I attribute this in part because some of the emotional movement of Harlow and Finn occurs during the love scenes. It’s during those moments that they divulge more of themselves, when we see that they are more than two ships passing in the night. During their intimate encounters, you can’t help but see them inextricably tied together, bound not by the ropes Finn uses, but by their intense emotional connections.

It’s in the bedroom that we see Finn as tender and giving, making up for much of his sullenness out of it.

We get to see a set up for the third book in the series as well as glimpses of the couple from Sweet Filthy Boy. Ansel steals all his scenes including the one where he tries to order more brown sugar for his oatmeal.

In closing, I’d like to say that we need that thing with Finn and his brothers to become a reality. Make it happen!  B