This is the second to last book in the Guardian series. The hero is a human named Nicholas St. Croix who first appeared in Demon Blood as a demon hunter. Nicholas searches for the demon who impersonated his mother and drove his father to suicide. He believes that Ash, a halfling demon, can lead him to this villain. Ash has taken on the appearance of someone that Nicholas once knew and who he believed had been killed by his demon target. Ash, however, can’t remember anything of her time before the Nightingale House, a psychiatric hospital. 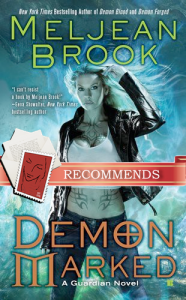 She doesn’t know if she was once this Rachel person that Nicholas claims to have cared about. She doesn’t know exactly what she is. She only knows that she scared the beejeesus out of the staff at the Nightingale House because she could clothe herself from thin air, scent the feelings of others, jump from high altitudes and sometimes she even turned red. The what question is part of the mystery that drives the plot and for a Guardian book, I found this plot to be fairly straightforward. Can Nicholas overcome his hatred of everything demonic to accept his growing feelings for Ash? Will Ash regain her memory? Is she Rachel reborn?

For the overarching series plot, Caelum is literally falling apart. The buildings are crumbling and the place is abandoned. Most of the guardians have ascended. Michael is gone and Taylor is supposed to be gathering new guardians as replacements but no human has offered up the requisite sacrifice in the last year.

The reveal of Ash’s identity is actually told early on in the story but in such a subtle way that I totally missed it on the first reading.  Upon review, I felt foolish for having overlooked it but no part of the text is included just for fun. Instead, the clues about Ash and how she relates to the overall series arc are there to be found.  It is part of what makes the series engaging and worth re-reading.  But the inclusion of a big series plot with a complicated story arc can also lend itself to confusing a reader, particularly a reader who jumps in at the middle of the series. I don’t know that a reader can jump into this series although you have provided a great number of guides on your site for new readers.

I thought this was a good addition to the series because I was completely engaged when going in I thought I might skip to the Taylor/Michael bits. Nicholas was the billionaire asshole bent on revenge but for a good reason but his anger couldn’t stand up to Ash’s refusal to be upset or hurt by his attacks.  Ash’s inability to be a good demon provides for several moments of comic relief:

“I’d rather be a clever demon. Perhaps that’s why it is taking me so long to come up with a plot against you. My standards are too high.”

Nicholas bit back his laugh. Damn it. How did she turn his anger and suspicion around so easily? In all probability, she was plotting to destroy him. He ought to be preparing for it, not finding humor in it.
“Have you been trying to think up many plots?”

“Not really.” She gave him a sideways glance. “It ought to be simpler now, knowing that I should think of something cliché. And you never answered me: Are demons all so obvious?”

At first glance, it seems that Nicholas has the bigger story arc. He goes from demon hunting man to caring so deeply about Ash that his decision is placing him at odds with the Guardians. Yet Ash is the one who had no memory, who is recreating her life as the book unfolds.

It was pointed out early in the story that Nicholas’ feelings for Rachel were that of guilt rather than lost love and there were efforts to show why Ash was connecting to Nicholas where Rachel could not. With Rachel, Nicholas would have always felt guilty. She wouldn’t have understood his quest against demons or his role in the larger world. Ash was part of that larger world. Nicholas didn’t have to care for Ash as he would have had to care and watch out for Rachel’s safety. Ash was self sufficient, both emotionally and physically, than Rachel.

In Demon Forged, [spoiler]Guardian leader Michael had traded himself to Lucifer and is now frozen in Hell.  Now the Guardians spend their time searching for a way to save him.[/spoiler] While I am anxious for Michael’s book, I didn’t find Demon Marked to be a half hearted effort to keep me entertained while I waited for the climax to the series. Instead, Nicholas St. Croix’s quest for vengeance is paired with a tender and engaging love story with Ash. I read this about the same time as Nalini Singh’s Archangel Blade and I found this one to be actually lighter in tone because of the humor.  B