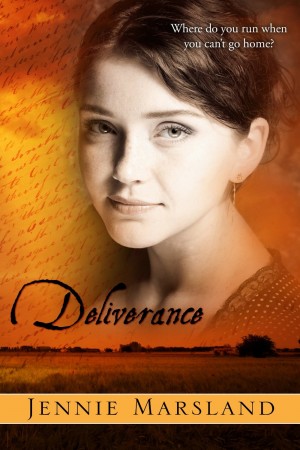 I recently picked up Shattered, the first book in your Winds of War, Winds of Change series, because it was free and had an unusual setting. While I wasn’t truly wowed by it, it was promising enough – and on top of that, it takes place in Canada (!) during World War I (!) and is not an inspirational. Naturally I had to get Deliverance next.

The series focuses on the three O’Neill siblings from Halifax: older brother Carl and sisters Georgie and Alice. Deliverance is Carl’s story, and he has a lot to overcome on his way to a happy ending, as does the heroine, Naomi. I should note that if any readers have read the excerpt at the end of Shattered, it is quite different from what ended up in the published version of Deliverance – and those changes are for the better, in my opinion.

Naomi Franklin is returning from a month-long stay in Winnipeg to her home in Saskatchewan when she sees porters carrying a man off the train. He is drunk and possibly ill, but does not look too sick, so she gives them directions to the local jail and leaves them to their work. Soon after, however, the man’s condition takes a turn for the worse, and there is concern that he might die. Naomi and her father Kenneth, the town’s doctor, take him in for medical care.

Lt. Carl O’Neill is recently returned from the war, after months of being thought missing and possibly killed in action. Instead, however, Carl was injured and taken captive shortly after losing several of his men in an ambush. Although treated well at first, Carl ended up in a reprisal camp, and has done and experienced things that left him with a severe case of what was then referred to as shell shock, and is now known as PTSD. He eventually escaped and was sent back home to recuperate before rejoining the army. Carl felt out of place in Halifax, is haunted by nightmares and thoughts of the war, and sometimes finds it difficult to separate these from reality. In his confusion, he hits his sister Alice, and is later beaten up while helping a bootlegger friend, which results in broken ribs and other injuries.

Carl believes that he is of no use to his family and will only hurt them. Even though he is not recovered from his injuries, he walks away from the hospital, leaves all of his belongings behind (including his Military Cross), and gets on a train, hoping to make his way to Vancouver and find work there. But Carl only makes it as far as Mackenzie, Saskatchewan, before being removed from the train – out cold from a combination of alcohol and pneumonia.

Naomi was brought up to leave Mackenzie. Her mother died when she was young, and her father, knowing that a farming life was not right for his only child, encouraged her to pursue an education and a professional career. She studied nursing at university and then served overseas at a field hospital. Naomi was good at her job, but burned out and could not continue, so she returned home to help her father and figure out her next steps. A few months later, while returning from visit to a local farm, she was assaulted and raped by a farmhand. Naomi decided not to report the rape to authorities: she knew that without witnesses, no sign of struggle, and her assailant long gone, nobody would take her or the investigation seriously. But Naomi ends up pregnant, and she went to Winnipeg to have an abortion (something one doesn’t see often in the genre). She wants to help the new patient that has been brought into her home, but she is also traumatized by the assault and finds it difficult to touch a man, even for medical reasons.

Carl is AWOL, and is consumed with guilt for things he’s done. He wants to leave his old life behind, and introduces himself as Ben MacNeil – one of the men who died under his command. I could certainly understand Carl’s desire to move on. Not only were his war experiences awful, he was pretty much a jerk growing up, and does not want to hurt any more people. He plans to get well, find a way to pay the Franklins, and then continue west. As Naomi and Carl get to know one another during his recovery, however, he begins to want more from life. But Carl has a lot of baggage and has made some poor choices, so figuring out how to become the person he wants to be, and whether this is even possible, is a real challenge for him.

For Carl, getting to know Naomi as well as her family and friends is his first experience with a supportive and loving environment. His own father is a hard man who took his frustrations out on his wife and children, and his mother was unable to hold his father in check. Carl was often a poor judge of character when it came to choosing friends and did not have much of a relationship with his sisters. He knows that he has treated his mother and sisters badly over the years, and is torn between wanting to make amends and believing that they are better off thinking him dead.

Naomi, on the other hand, has a loving and supportive father; the family’s housekeeper Laura, who plays a maternal role in her life; and her childhood friends Corrine and Barry, now a married couple with their own farm. Nonetheless, there are some things that she feels she can’t share with them, about her wartime experiences and about the rape and how it affected her.

Despite the differences in their upbringings, Naomi and Carl both suffered during and after the war, which helps them understand what the other is going through and talk to each other about the things that they can’t always share with others – or respect that the other is not ready to talk about certain things. There’s an attraction almost from the start, but the friendship and trust between them develop gradually. I appreciated your portrayal of two people who have been hurt but not defeated by life, and who find happiness and peace together and become stronger as a result.

Deliverance is set in the fall of 1917, with the war still going on and the Halifax Explosion not far in the future (the O’Neills are from Richmond, which was devastated in the explosion). I thought that you made very good use of the period and the rural prairie setting and I could see why Carl would find the open spaces so appealing. Mackenzie itself home to some lovely people, but also judgmental ones (more on that in the spoiler section) and quite a few gossips. The effects of the war are not as pronounced as in the first book in the series, which takes place in Halifax, but it is on people’s minds and young men from the town have been lost or injured overseas.

What happened to Naomi becomes public knowledge when the rapist is caught after assaulting another young woman elsewhere. Naomi is then approached by the authorities to corroborate his confession, and she blames herself for not reporting the rape, thinking that this might have spared the other girl from being assaulted. She ends up testifying against him at trial and helps secure his conviction. As I noted, this was a time when rape survivors were often thought to be at least partially to blame for their assaults. There are people in the community who believe this about Naomi and are awful to her, as are some of the constables and lawyers involved in the case – a lot of victim blaming that was probably true to the period, but is difficult to read.

Overall, I enjoyed reading Deliverance, but I did have a number of issues with it that ultimately brought my grade down and leave me somewhat hesitant to give it an unqualified recommendation. One is the pace of Naomi’s psychological recovery from the rape and its aftermath; it seemed like once she had Carl in her life, she got over her fear of men and intimacy very quickly, and I’m not sure how believable that was. In contrast, Carl’s self-loathing and feelings of inadequacy, while understandable, went on for longer than I’d have liked, and this led to a lengthy separation in the second half of the book. Finally, my biggest problem was that the resolution of Deliverance seemed to go on for too long, which for me lessened its emotional impact. I think there was a lot in the final chapters that could have been condensed and that the emotional payoff would have been greater if it had been.

Nonetheless, I appreciate your focus on a period and places that have not been widely used in the romance genre. In both of your books that I’ve read, you’ve written compelling characters dealing with serious issues, and these portrayals struck me as authentic. I would like to read more like this, and your recently published Flight is on my TBR list. B.