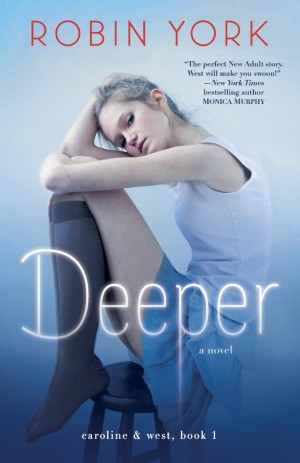 I enjoyed several New Adult books when I first discovered the genre, but my interest faded pretty quickly and I began to feel like many of the books were so similar that I may as well just re-read my favorites. The premise of Deeper sounded interesting enough to give it a shot, however, and I’m glad I did.

Caroline Piasecki sees herself as a good girl, a driven student, with career ambitions and her life mapped out. Then at the beginning of her sophomore year in college, she gets a text, and a link, that changes everything: her ex-boyfriend has posted pornographic pictures of her online, along with identifying information. The pictures were consensual, but making them public was obviously not. Caroline had gone along with what her boyfriend wanted to do, even though she had reservations about some of it – and when the relationship ended, he used that to strike out at her.

You write in the author’s note that non-consensual pornography – better known as revenge porn – sucks, and it does. It is a horrible invasion of privacy, an attempt to embarrass and shame people (and especially women) about their sexuality, opens them to harassment (or worse), and can make it very difficult to trust people in the future. For Caroline, every interaction now carries a subtext: has this person seen me naked, having sex, do they think I’m a slut, are they judging me, are the pictures why this cute guy wants to talk to me? She gets emails with obscene photos and has a constant soundtrack in her head of men slut-shaming her. Caroline doesn’t want to be a victim, and she wants to move on in her life. Her challenge is in coming to terms with the fact that legally, she can’t do much, and the internet never forgets; she has to find her way to deal with what happened, and come out stronger in a different way.

Caroline’s first reaction is to try and make everything go away, which turns out to be a lost cause. But she doesn’t hide, though she does want to. She becomes closer to West Leavitt, whom she met when they first started college. He knows about the pictures, and she knows he’s seen them, but she feels right with him. Here’s how she describes it on one occasion:

Insomnia has made me her bitch, but it doesn’t matter so much when I can hang out with West and study in my little nook. I nap after class. I’m turning into a creature of the night. It’s all right, though. I guess I’d rather be Bella Swan hanging out at the Cullen place than, you know, school Bella—all pissy and defensive, clomping around Forks High, convinced everyone hates her.

West and Caroline had kept their distance from each other on purpose. She was in a relationship and had also promised her father to stay away from West; for West, there’s no place in his life for someone he could potentially feel strongly about. He’s seen his mother’s obsessive and unhealthy relationship with his father wreck her life, and he wants better things for himself: an education, a career, financial stability, and the ability to make a good life for himself and for his younger sister, Frankie. In his world,

Assuming you’re going to get into med school is like assuming you can walk on water. It’s a fairy tale, and people who believe in fairy tales are idiots.

To accomplish his goals, West will do just about anything: work multiple jobs, almost never sleep, deal drugs, do sex work – and all of it takes a toll. Still, I wasn’t as invested in West’s part of the story as in Caroline’s, and I felt at times as though you’d gone overboard with his difficult background and its effect on him. But Caroline only takes so much of his sending mixed signals and acting like a jerk before she starts calling him out on things, which was good.  I could see how these two characters that came from very different places fit together, and I wanted them to find a way to be happy. Also, I liked that Caroline’s character arc wasn’t just about her relationship with West but also with her best friend and with the new friends she makes as she tries to figure out who and what she wants to be.

In addition to West’s background, a few other things didn’t quite work for me – one is the introductions to each chapter. In several of them, the character narrating would basically give a preview of what was about to happen, which I thought that was odd. Another is the various references to things being deeper, a deeper connection, etc. in the second half of the book. I get that this is the title and a major theme of the book, but it was repeated a few too many times. Finally, I felt that as the novel progressed, there was too much focus on Caroline and West’s sexual relationship than was needed to advance the plot, the relationship or the characters. Again, I can see why this was done: West is used to thinking of sex as a tool, Caroline wants to take charge of her sexuality after what happened to her, and both are figuring out their relationship as they go. But it was just a bit too much at times.

I should point out that Caroline and West do get a happily for now interlude, but the book does not have a happy resolution, and although the two care for each other, each of them has to head in a different direction. Their relationships with their families are also not settled, and Caroline still has to deal with the aftermath of her ex’s actions. Despite my reservations about certain aspects of this book, I’m interested enough to continue and see how things work out for them in the next one. Deeper gets a B.