REVIEW: Dead Ever After by Charlaine Harris

Now that I read so much in digital, I don’t pay as much attention to book covers as I used to. But the cover for Dead Ever After says so much about the book itself, that I’m tempted to tell people who wonder how the series ends to take their cues from the cover. Why? Because Sookie is the prominent, central, and only fully represented character, which is how I’ve always viewed, read, and enjoyed the series. And despite all the controversy about the ending, I feel that with this book the series ultimately stayed true to its initial vision and focus, namely Sookie’s journey toward self-acceptance and a sense of belonging. And while not a perfect read, Dead Ever After satisfied me intellectually and emotionally, to a surprisingly high degree. 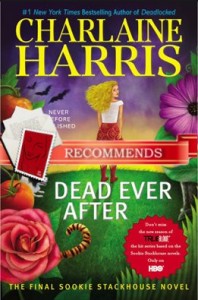 Let me preface this review by saying first that I was never a fan of all of the suitor options for Sookie, except in so far as they allowed her to grow more fully into herself. At some point, though (by the time Quinn came into the picture), they started to feel like a distraction to me. Also, the past few books in the series have felt somewhat rushed to me, with everything ramping up for the finale. The last book, in particular, felt jam-packed with preparatory chaos, with Eric and Sookie facing the reality of Eric’s arranged marriage to the (incredibly beautiful) Queen of Oklahoma; the new vampire king of Louisiana, whose second in command is even more ambitious than Eric; Sookie’s fae cousins, who are ultimately removed back to Faery with her great-grandfather, who has (mostly) sealed up the borders between Faery and the human world; political struggles among the shifters that affect both Sam and Alcide; and the terrible promise of the cluviel dor, a one-of-a-kind magical item that will grant Sookie a single wish.

The burden of possessing the cluviel dor (which many would gladly kill Sookie to possess) is exceeded only by the magnitude of the choice she ultimately makes for its use: saving Sam when he is accidentally killed by his ferocious lover, Jannalynn, who, unbeknownst to Sam, planned to usurp (and assassinate) Alcide and take over the Bon Temps Were pack. Sookie’s choice, the result of a split-second reaction, is one that has enormous consequences for Sookie and her future. Dead Ever After is all about playing out those consequences.

What has always kept Sookie going is her innate pragmatism and the desire to be a good person in a world that often challenges her best intentions. During the course of the series she has had to kill, she has been tortured and almost raped, she has been betrayed and manipulated by the people who claim to care about her, and forced into a vampire marriage with a man who loves her (as much as he is able) but who is bound to follow the orders of his maker and marry another vampire who insists that Sookie never set foot in Oklahoma. And yet, as Dead Ever After begins, Sookie is looking forward to her brother Jason’s wedding to Michelle, enjoying the recent birth of Tara’s twins, appreciating the lush beauty of the yard, because Niall enchanted the land around her house, and anticipating the comfort of a financial windfall from her fae cousin Claudine’s unfortunate and untimely death. In other words, Sookie is still trying to balance her extraordinary experiences with the relatively ordinary life she imagines for herself, and to appreciate the sweet that comes with all the bitter in her world.

But this negotiation requires facing the consequences of her decision to save Sam, the most unexpected of which is that Sam seems to be remote, uncommunicative, self-isolating, and not nearly as vocally grateful as Sookie would have expected. Her limited ability to read shifters leaves her uncertain about whether something is physically wrong with him, because one of the problems with using the cluviel dor is that the wisher will pay a price for the wish. And there are many potential prices to pay in Dead Ever After, because a number of enemies from Sookie’s past finally get the chance to get closer to her, in part because Eric’s impending marriage to the beautiful Freyda means that he has basically shunned Sookie (possibly also some punishment for not using the cluviel dor on him), and for a time she is left somewhat vulnerable. Vulnerable enough, at least, that she is framed for the murder of her former friend, Arlene, who is found strangled with Sookie’s own scarf and left in the dumpster behind Merlotte’s, the night after she approached Sookie in the bar looking to get her job back. Arlene has been freed from prison on bail pending appeal of her case, represented by a lawyer she does not know (but anyone who has read the series in full does), setting in motion a series of events that force Sookie to prove her innocence in the midst of trying to figure out her confused relationship issues.

Sookie’s peril brings a number of old friends (and enemies) to Bon Temps, which is both a strength and a weakness of the book. It’s a strength in the way we (and Sookie) get to see how extensive Sookie’s support network really is, but a weakness in that it sometimes makes the stage ridiculously crowded, drawing even more attention to the final-act nature of the book. Because so many characters from past books made a cameo in Dead Ever After, some of the (too many) plot strands did not come fully together for me (the devil sub-plot felt particularly clunky), and there was an abruptness to some of the relationships that was clearly a function of trying to wrap so much up in the course of one book.

At the same time, though, the focus is on Sookie the Survivor. From the first book, where Sookie’s beloved grandmother is murdered in her kitchen, through all of the other bodies, betrayals, and awful decisions Sookie has had to make, she has endured and she has gotten stronger and wiser. I still remember the first scene from the first book, Dead Until Dark, where Bill Compton walks into Merlotte’s and changes Sookie’s life forever. In some ways, Sookie hasn’t changed much; she’s still trying to be the best person she can, to live up to the example she thinks her grandmother would have expected. In other ways, though, she has grown so much, her naiveté winnowed both by sorrow and elation. And for me, this process has always stood as the heart and soul of the books, even while Sookie’s voice was telling a bigger story about what it means to be part of a community, and the ways in which petty, ignorant prejudice unnecessarily divides and discriminates.

In some ways, Sookie always stood in the middle ground between being part of Bon Temps and being an outcast, and she ultimately served as a kind of ambassador between the full-humans and the supes (and the hybrids, like her and her brother). I like that Harris always imbued the micro communities with complexity – the vamps, shifters, and fae, for example, were not unified nor all good or bad – and that she showed progress during the series in terms of acceptance, but still acknowledged that the problems were larger and deeper than 13 books could solve.

Which is another reason I was satisfied with the way the series closed out in Dead Ever After. Without revealing major spoilers (although I am happy to discuss them in the comments), will say that I think the book struck a nice balance between larger social issues and the individual focus on Sookie’s happiness and emotional growth that bore and carried the weight of the series. In the end, the focus is on Sookie, and on her alone – whatever the fate of her romantic life, which is quite ambiguously represented – no longer an outsider, but never merely ordinary, either. B