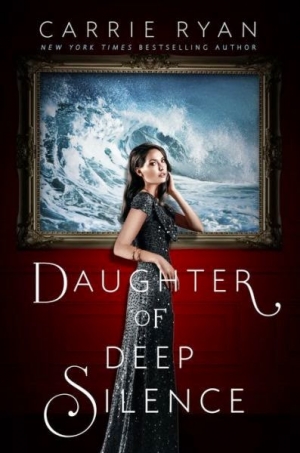 The last book of Carrie Ryan’s I read was The Forest of Hands and Teeth. Remember that one? A lot has changed since then! That was a zombie novel; this is a thriller. This year has proved interesting in terms of YA books for me. I seem to have read a couple novels about twins taking each other’s places. There’s a certain amount of self-selection there, of course, and it is a common trope, but it’s always interesting to take a step back and look at overall patterns.

Daughter of Deep Silence (great title, by the way) takes on a variation of that trope. Frances is one of three survivors of a brutal attack on a cruise ship. The problem? The other two survivors pretend the attack never happened. Instead, they claim the boat capsized, killing everyone else on board. Frances was never meant to survive.

But she does and having lost both of her parents in the tragedy, is now an orphan. The father of a girl who’d befriended Frances on the cruise takes her in. Not only that but he allows her to assume his dead daughter’s identity. Frances is Frances no longer. She’s now Libby and with all the resources offered by her dead friend’s wealth and connections, she’s going to get revenge on the two men who lied about what happened on that cruise liner and more importantly, find out why.

If you think this sounds like Revenge, you’re right. There are some marked similarities. I don’t think this is a bad thing. I loved the first season of that TV show. (Not so much everything after.) I was initially taken aback by the idea of Frances assuming Libby’s identity. They’re not related. The amount of time between the cruise liner sinking and her return home is about 3-4 years. People change but not that much. But it turns out that Frances had plastic surgery to make herself look like Libby, and that went a long way to restoring my suspension of disbelief.

This isn’t to say I don’t have some quibbles. I’m still unsure as to why she was left alone all this time. Clearly, she knows the truth about what happened. Wouldn’t the other two survivors be worried about this? Wouldn’t they have sought her out before now? Did they just assume that because she didn’t contradict their testimony, it was no big deal? That doesn’t really make sense once we learn why the cover-up occurred.

I really enjoyed Frances/Libby’s machinations to insinuate herself into the Wells’ lives. Yes, she’s doing bad things. Yes, her moral center has gone decidedly askew. But when you’re consumed by revenge, it’s believable to see a protagonist throw all those things out the window. Frances gave up her entire life and identity to become Libby. She’s lost herself. Revenge has consumed everything until there’s nothing left. If you don’t like revenge narratives of this sort, then Daughter of Deep Silence probably isn’t for you. But if you do, this novel does an interesting psychological exploration.

Now why did I stop watching Revenge, if I loved the first season so much? Because in the second season, they introduced this love interest for Emily that I couldn’t care less about. I have a similar complaint about Daughter. While on that cruise, Frances fell in love with Grey, who is, of course, one of the two other survivors. As Libby, she must destroy him. But as Frances, she still loves him.

Could I find Grey any more boring? Probably not. I didn’t care about him or his angst. I actually wished she would hook up with Shepherd, who’d been in love with Libby. The conflict that would have arisen from that relationship would have been more interesting and complicated than the one between Frances/Libby and Grey. My disappointment also stems from the fact that I find it hard to believe that the guy you fall in love with on a weeklong cruise when you’re 14 is the same guy you’ll be in love with when you’re 18. Especially when you’re full of rage that he lied about the mass murder of a cruise liner. I know. I’m not the target audience. But still, it’s disappointing.

Now, let’s get to why the format of this review is a little different than usual. Remember how I talked about patterns earlier? Let’s talk about that.

Diversity. It’s awesome. It’s great. I’m all about diversity. But now that it’s become big in the YA world, I’ve reached the point where I’ve started to look at the types of diversity we’re seeing and getting. Don’t get me wrong. I’m glad more books are including diverse characters. However, we can do better. Frances, Libby and Grey are white. Shepherd is Latino. And this goes back to the patterns I mentioned. Yes, we may have characters of color in a novel, but they’re still the supporting characters. They’re not the protagonists or love interests. They’re there to help the white main character and maybe be that potential love interest who ultimately ends up not being the final one. They’re sidelined. They’re taken out of action. They don’t really have an effect on the story. This isn’t just about Shepherd in Daughter. Like I said, it’s a pattern I’m noticing. Writers, you can do better than this.

Despite those two things, I did like this book overall. I also liked the ending, which might upset some people, but I thought it was appropriate, given how Frances/Libby’s plot unfolded. I just wish the romantic subplot had gone a different way and that the book didn’t perpetuate the character of color as a sidekick thing. B

(Yeah, I gave it a B despite my complaints. Imagine the grade it would have gotten had it gone another way.)