This recommendation came by way via Has from Bookpushers and Elyssa Patrick. I downloaded it for free with my KU subscription and then it sat amongst the mountain of other books. The other night, I cycled it to the top and started reading and hours later I reminded myself I had to get up and work but still I kept reading. 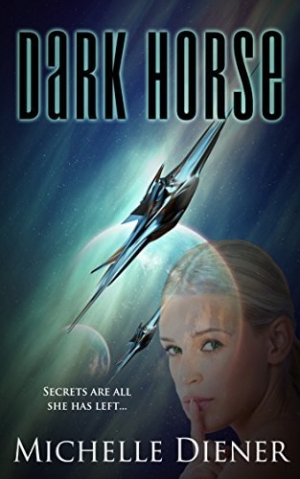 The story opens with an escape. Three months after Rose was abducted from Earth, she is escaping with the help of a non corporeal being named Sazo who is embodied in a crystal that she wears around her neck. With Sazo’s help, she climbs into a craft that is sent to a nearby uninhabited planet named Harmon.

Sazo sent the Tecran Class 5 battleship into the heart of Grih territory. There, Dav Jallan, the Captain of a Grih explorer ship, takes command of the stranded vessel. Inside the vessel, he finds most of the Tecrans dead but for a few upper level crew members who had access to portable air units. He also finds evidence of foreign sentient life and from the smell and looks of the cells, it is apparent that the Tecrans were violating the Sentient Beings Agreement.

The crew members of Jallan’s ship identify seven orange heartbeats moving away from the crippled Class 5. Orange is the term that the Grih and other members of the United Council use to describe foreign beings.

Rose is rescued by Dav Jallan and his crew, just as Sazo intends. He chose the Grih because they were so close in biological makeup to Rose, a human. Her bones are denser. She is shorter, smaller, curvier and she has a musical voice compared to the Grih.

In Dark Horse, you get a stranger in a strange land story along with a battleships and political conflict. Rose’s appearance sets off a chain of unexpected events that inevitably change the Grih and all of the members of the Universal Council.

Rose is a likable character–loyal, smart and pragmatic. She’s almost too level-headed at times although she does make a few mistakes here and there. She accepts her exile from her family and home with aplomb minus a few shower induced breakdowns. But for the most part Rose the right decisions at the right time. I enjoyed this portrayal but some may find it a little too pat.

Instead of using the language barrier as a way to create conflict, Rose actually speaks Grih, having used her time in captivity and her facility for language to learn Tecran, Grih and a few other languages. This allows her to communicate with Dav and his crew.

For the most part, the Grih are highly respectful of her and become enamored when it is discovered that Rose can sing. Music makers are revered by the Grih as few of their kind can produce music. There are a few cultural differences between the Grih and Rose although beyond the music and size, not much is mentioned. The attraction between Rose and Dav is believable although it almost progresses too quickly. (He’s touching her bare breast after only a few days of meeting her even though their previous interactions haven’t risen to that level).

The real focus is on the tension between why the Class 5 battleship was gifted into the Grih hands, what Rose is hiding, and how will it all play out.  Rose’s relationship with Sazo and her attempts to give him a moral compass is almost as interesting as her relationship with Dav. (Maybe more so)

→ Jane
Previous article: Monday News: Death of a playwright, a book-banning librarian, the art of map-making, and how to hack your book cover
Next Post: REVIEW: Dark Surrender by Erica Ridley