I’m a huge fan of yours. I loved the original Kushiel trilogy and while I thought the succeeding trilogies didn’t quite live up to that beginning, the Phedre novels still rank high among my favorite fantasy novels. Your non-Kushiel novels didn’t hit me the same way but I still appreciated what you were doing with those narratives. You always try to do something different and subversive and I like that. So when I heard you were turning your attention to urban fantasy, I was intrigued. I’ve made no secret of the fact that the subgenre has lost its charm for me, but some things will bring me back. My favorite author writing in it is one of them. 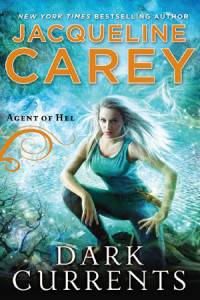 Daisy Johanssen is a walking cautionary tale against using Ouija boards. Most stories talk about accidental possessions or summoning ghosts who refuse to leave. When Daisy’s mother used an Ouija board, the other girls at the slumber party woke up in the middle of the night to find her having not-entirely consensual sex with an incubus. Yikes. Daisy was the result of that.

In most places, this would be an issue. However, Daisy and her mother hail from Pemkowet, a midwestern town known for one thing: its supernatural population. Many decades ago, the Norse goddess Hel made her home there and as a result, an underground supernatural community — known as the eldritch community — sprung up around her. As an adult, Daisy serves as Hel’s enforcer and the liaison between the Pemkowet police department and the eldritch community.

Because of its supernatural population, Pemkowet has become a tourist town. People come from all over in the hopes that they’ll spy a cute fairy or maybe even a vampire. Of course, the reality is not quite as pretty. When a frat boy drowns in the lake, everyone initially assumes it was accidental. Unfortunately, that’s not the case. And now Daisy must find out what exactly happened in order to keep Pemkowet’s tourist trade — and the eldritch community at the heart of it — safe.

This is a pretty big departure from the Kushiel books. It’s lighter in tone, so readers shouldn’t go in expecting the darkness that characterized your traditional fantasy novels. On the other hand, I personally am tired of the faux-gritty darkness that’s pervaded the urban fantasy genre lately so I found the lighter tone refreshing. Don’t get me wrong. It’s not comedic or humorous. It just wasn’t unrelentingly dark or “edgy” and wasn’t trying to be.

I found Daisy to be a very relatable heroine. I liked how she took everything in stride. Yes, she’s half-demon and her father wants to use her as a vehicle to cause the apocalypse, but she has no intention of letting that bring her down. I loved that she has a great relationship with her mother and a female friend! A close female friend who she’s known since forever even. Considering one of my major complaints with the urban fantasy genre is that its heroines often don’t have or keep female friends, this was excellent.

And Daisy values her best friend a greal deal. She tries to patch things up after an argument over a potential love interest. When her friend’s little brother is endangered, she drops everything to help find him — even though it may jeopardize other aspects of and relationships in her life. Daisy prioritizes this friendship and I liked that its weight reflected the length of time they’d known each other.

One of the things I liked about the Kushiel books was how female positive they ultimately were, and I’m glad to see that carry over here. Daisy, her mother, and her best friend were great. The complicated layers to their relationships struck me as very real. I adored Lurine, Daisy’s former babysitter turned B-movie actress, who also happens to be a very powerful member of the eldritch community. I loved her. If you wrote hundreds of pages about the adventures of Daisy and Lurine, I would be on-board that train so fast, I’m not even going to lie.

Dark Currents isn’t what I’d consider a mindblowingly original novel. The subgenre is well-established by this point and its tropes are well defined. We have a heroine with a supernatural heritage caught between two worlds in an investigative role. There are a few supernatural men in her life that she may or may not be interested in and want to pursue. Someone has died, and this jeopardizes the relationship between supernaturals and normal humans. We’ve seen these plot points before.

But there are touches and quirks that keep thing interesting. The light tone, as I mentioned before. The small town setting and the fact that everyone — and I do mean everyone — knows your business. One of Daisy’s love interests is someone she’s known since elementary school! (This is really a suburban fantasy, all things considered.) The fact that Daisy and her close circle of family and friends are actually lower working class, and it’s not the result of them having to wander like vagabonds. Daisy’s mother lives in a trailer park and works as a seamstress. Daisy’s best friend works as a cleaning lady. You don’t really see these sorts of jobs in UF novels. Even the push and pull between townies and tourists was pretty accurate.

All that said, we do catch glimpses of darkness here and there. Daisy can bring about the apocalypse if she chooses to embrace her demonic heritage, after all. And there were the circumstances surrounding the frat boy’s death. That was pretty twisted. So even though I would call this a lighter UF, readers shouldn’t make the mistake of thinking it’s all sunshine and rainbows. It’s definitely not. At the very least, the conflict between Pemkowet’s eldritch population and the religious groups who want them razed to the ground should provide some fodder for thought.

Dark Currents is a quirky novel, but I think it’s a solid entry into the subgenre. The murder mystery plot is well-constructed and well-paced. It is very much a first novel in a series, given that it sets up various characters and relationships, but it did the job well. I’m interested in seeing where Daisy goes from here and looking forward to the next one. (And more Lurine wouldn’t hurt too.) B

Jia is an avid reader who loves fantasy and young adult novels. She's also currently dipping her toes in the new adult genre but remains unconvinced by the prevalent need for traumatic pasts. Her favorite authors are Michelle West and Jacqueline Carey. YA authors whose works she's enjoyed include Holly Black, Laini Taylor, Ally Carter, and Megan Miranda. Jia's on a neverending quest for novels with diverse casts and multicultural settings. Feel free to email her with recommendations at [email protected]dearauthor.com!