I became a George Eliot fangirl after reading and loving Middlemarch a few years ago. I had previously only read Silas Marner by Eliot, in high school English, and while I had kind of liked parts of it, I recalled it as a bit of a slog (but then, a lot of 19th century fiction was and is a bit of a slog for me). When casting around for a classic to read, I thought of this, George Eliot’s last book, about which I knew nothing beyond the title. 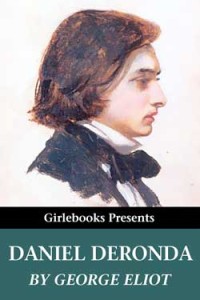 Daniel Deronda opens in a casino in a resort town in Germany, and the first few chapters only mention the title character in passing. The initial focus is on Gwendolen Harleth, a vivacious young woman who is staying with friends, gambling and generally enjoying time away from the constraints of her family. Daniel is also in town and he and Gwendolen make note of each other but aren’t actually introduced, and when she returns to her room late one night Gwendolen finds a letter from her mother that changes the trajectory of her life. Her family is financially ruined, her mother writes, and Gwendolen must come home immediately. Gwendolen prepares to return home the next morning but first pawns a necklace with the idea that she might use the money as a stake in winning back the family fortune. (Gwendolen appears to be about as naively hopeful about gambling as I am on those rare occasions that I buy a lottery ticket.) Before she can set out for the casino again, a hotel porter returns her necklace with a mysterious note from someone who “found” it. Gwendolen realizes that Daniel Deronda, whom she knows to be staying at a hotel adjacent to the pawnbroker’s shop, must have seen her and bought the necklace back for her. She is angry and humiliated by this unexpected and unexplained liberty from a stranger, thinking:

No one had ever before dared to treat her with irony and contempt. One thing was clear: she must carry out her resolution to quit this place at once; it was impossible for her to reappear in the public salon, still less stand at the gaming- table with the risk of seeing Deronda.

The story then moves to an earlier time (I found the timeline confusing here; I first thought that Gwendolen was returning home after the previously described events, but it eventually I realized that she’s returning home from an earlier absence), and we meet the Harleth family, consisting of Gwendolen’s mother and four younger sisters. It’s clear that Gwendolen is ultimately the person around whom the family revolves; her mother is pessimistic and meek, and her sisters no match for Gwendolen’s charisma and force of will. It’s not surprising that she chafes at the restrictive life she has been reduced to, though Gwendolen, especially early on, is often not a terribly sympathetic character, being both self-involved and rather disdainful of others. She accepts it as her due when men fall in love with her, and generally only thinks in terms of what she can get out of people. Still, when she speaks of wishing to have adventures like Lady Hester Stanhope, or laments that as a woman (especially as an unmarried one), she doesn’t have the freedom that men of her class enjoy, it’s hard not to feel for her; one realizes she might indeed be a very different person if she *had* been born male.

I was beginning to wonder why the novel was called Daniel Deronda by the time the title character reappeared and we finally learned something about him. Deronda’s past is mysterious, even to himself – he has been raised by Sir Hugo Mallinger, who has told him nothing of his parentage. Deronda (and others) believe he may well be Sir Hugo’s illegitimate son, but he seems afraid to ask, or perhaps just too respectful of his foster father to discomfit him in any way. If Gwendolen is seriously flawed, Daniel Deronda himself is damn near a Christ figure (minus the martyrdom) – he is the epitome of righteousness and goodness. For all that, Daniel doesn’t really feel one dimensional – his pain over his unknown origins gives his character depth.

Daniel and Gwendolen’s lives continue to intersect when, back in England, she is courted by Henleigh Grandcourt, the nephew of Sir Hugo Mallinger. Anyone can see that Grandcourt is bad news, and eventually Gwendolen sees it too; it is revelations about his past and present situations that send her fleeing to Germany originally. But when she returns to the news of her family’s penury, and the prospect of having to work as a governess, Gwendolen breaks a promise and accepts Grandcourt’s suit.

Meanwhile, Daniel rescues a young woman from the Thames as she attempts to drown herself and takes her to the family of his good friend Hans Meyrick for care. Mirah Lapidoth is a Jewess who has come to London to find her long-lost mother and brother; despairing and alone, Mirah is suicidal by the time Daniel finds her.

It’s Daniel’s attempts on Mirah’s behalf to locate her missing family that put him in contact with a Jewish family, the Cohens, and their mysterious houseguest, the consumptive sage Mordecai. Mordecai ends up being Daniel’s friend and teacher, introducing him to a world and a religion he’d been unfamiliar with. Soon revelations about Daniel’s true origins sharpen his interest and draw him deeper into the lives of both Mordecai and Mirah.

As with many 19th century novels that I’ve read, there is at times, in Daniel Deronda, a lack of subtlety in conveying themes, especially where issues of morality are concerned. It’s not that the characters are one-dimensional, but generally virtue is rewarded and vice is punished, or at least repented of. The contrast between Gwendolen and Mirah is particularly sharp and at times felt unfair. By the time Gwendolen marries Grandcourt, it’s clear that she does so not just to benefit herself but her mother and sisters, who are relying on her to make a good marriage and get them out of their dire financial straits. Furthermore, when the marriage turns sour (actually, I’m not sure it’s ever anything *but* sour), Gwendolen takes pains to keep the truth of it from her concerned mother. (Though this may be due in part to Gwendolen’s natural strong pridefulness as well as a desire to protect her mother from the truth, I saw this as evidence of growth on her part.) Yet Gwendolen repeatedly flagellates herself for her choices, remembering the broken promise and the advantages the marriage brought her but forgetting that her choice was not entirely motivated by self-interest.

Mirah, meanwhile, chooses (attempted) death over dishonor. (Though I believe suicide is a sin in Judaism; perhaps this was not such a consideration for Mirah, raised without religion by her wicked father.) Mirah is the sort of historical novel character that I think readers were originally meant to admire because she’s just so good. But she comes off simpy and colorless most of the time. She’s not truly unlikable, but in contrasting her with Gwendolen, who I think we’re supposed to judge for her willfullness, the reader is sort of forced to choose between them (much as Daniel is, though for him it’s no choice, really). I’m always going to choose the Gwendolen type over the Mirah type, even if early in the novel Gwendolen made me want to slap her a couple of times. She has spirit; meanwhile Mirah is often described using the modifier “little”, which got on my last nerves.

I will go even further and say I prefer spirited, selfish Gwendolen to chastened, semi-helpless Gwendolen. It’s interesting to me that a female author who could fairly be seen as proto-feminist portrays her female characters in such a traditional and unfeminist light. I don’t judge Eliot here; it’s not really surprising as she’s a product of her times. I think even giving a character such as Gwendolen some depth and sympathy was probably more than could be expected of many of Eliot’s contemporaries.

Similarly, the depiction of Judaism and Jews is both interesting and a bit problematic for me. Clearly Eliot is more sympathetic to Jews than many other 19th century British authors (and probably many other 19th century Brits, period). But she does indulge in stereotypes in the portrayal of the moneylender Cohen and his somewhat graceless and grasping family. To be fair, they are not truly demonized, and a lot of Daniel’s (fairly muted) distaste for them could probably be judged simple classism (which even the most liberal of 19th century authors were guilty of, in my reading experience). Perhaps if Cohen hadn’t been a moneylender it wouldn’t have read as squicky to me. Similarly, when Mirah’s father shows up, he’s thoroughly villainous, a greedy, thieving gambler who essentially tried to pimp his daughter out (which is why she fled him initially). There’s nothing in his portrayal that read specifically like an indictment of Jews or Jewish characteristics to me, but at the same time his depiction did make me a little uncomfortable.

Ultimately, Daniel Deronda did not capture my imagination the way that Middlemarch did, but I appreciate the creation of a female character who is flawed but not irredeemable, and an interesting look at the way Jews were depicted in 19th century English literature. My grade is a B.